Where I work, we run bare-metal databases on non-redundant local storage. That is, a database is a very cheap frontend blade server. It has 2 CPUs, with 8 cores/16 threads each. It contains 128 GB of memory, 2 or 4 TB of local NVME and it has a 10 GBit/s network interface. It costs around 120 to 150 Euro per month to run for 5 years, including purchase price and all datacenter costs.

Data is stored on a local disk, preferably NVME, sometimes SSD, because we still have old hardware.

The purchase cost of a NVME drive can be as low as 150-200 Euro/TB for Enterprise grade hardware.

Is it not risky to run on non-redundant storage? 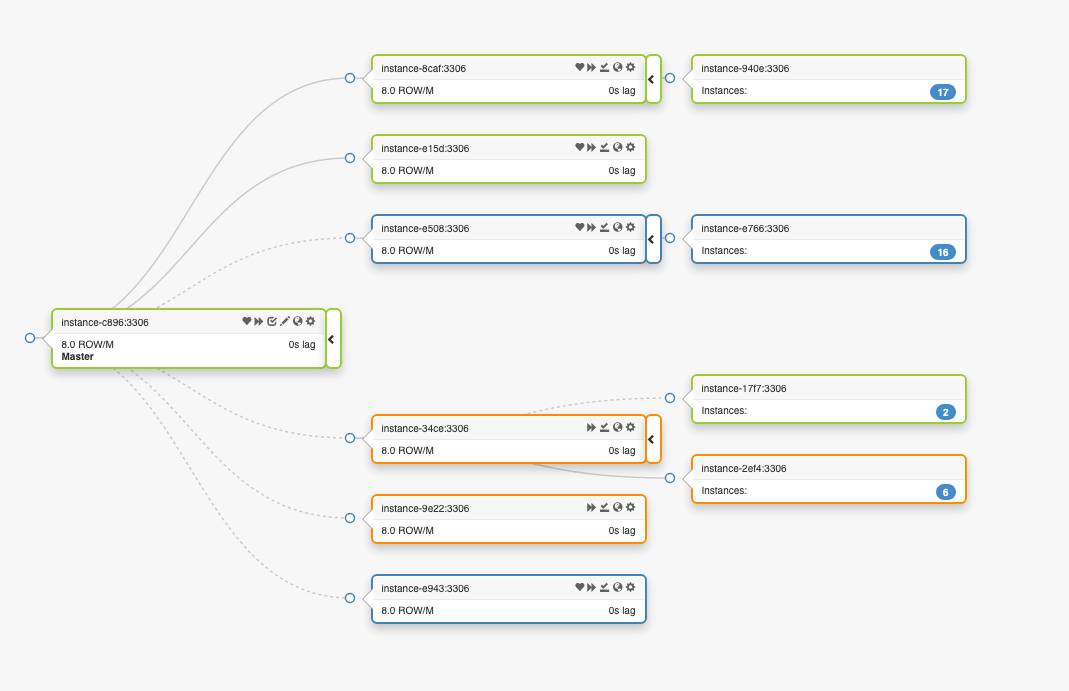 Our database replication happens in trees, which extend across multiple AZs and backing-technologies. (bare-metal, Openstack, …). They are marked in different colors. Writes go to the root of the tree on the left. They then replicate within fractions of a second down to the leaves at the right. Each replica provides a full copy of the data in a shared-nothing architecture, for read-scaleout. Applications find read-copies of the data close by, in the AZ they run in, and at the required capacity.

The image is a screenshot from Orchestrator, a tool that manages MySQL replication hierarchies. This is showing one particular hierarchy, but they all have this shape.

We are using MySQL replication for read-scaleout (and for a few other things, such as backups, as clone sources to make more replicas, for data import to Hadoop, and so on). Using “Global Transaction ID based replication” (GTID) and Orchestrator, we are leveraging the redundancy required for read-scaleout also to provide high-availability.

So how do we survive?

If a Primary dies, we detect that. We then automatically promote any Intermediate Replica to a new Primary, rearranging the replication hierarchy as we go. In the end, all Replicas now ultimately dangle from the newly promoted Primary.

The GTID-based way of using read-scaleout capacity for high-availability has many advantages. Not only do we get to use local storage, we can also use throwaway frontend blades instead of much more expensive special database hardware as we did in the olden times.

We also get intermediate replicas promoted to primaries, which means that these machines have already warmed up caches and are useful immediately after promotion, at normal speed.

Compare that to the situation of old (many years ago):

That last thing is important: ability to freely rearrange the replication tree allows us to speed up many daily operations that otherwise would be subject to many more constraints. Among them are fast version upgrades, moving capacity between pools and many other daily operations that allow us to provide “just one more replica than you need” in time and without much toil.

Local Disk has limits. Mostly, size limits: Our servers come with 2 TB or 4 TB of space. Larger hardware exists, but in limited numbers and it is spoken for by other teams.

Because volumes of distributed storage are made by a Filer by combining large disks to even larger volumes, they can be of almost arbitrary size. So if you need more than can be provided by a Blade with local storage, you need to move to iSCSI storage.

This is much like going from an i3 instance with local storage to a m5 instance with EBS, in flexibility, but also in cost: You now need to pay for the Blade and for the storage, in the same way you pay for the instance and the EBS.

You are likely also taking a latency hit: While you can hit a local storage at 1/20,000 s access time, with distributed storage there is one or more network hops involved, and worse, a lot of software and storage redundancy overhead at the destination.

You can expect more of 1/2,000 s access time than 1/20,000 s, so you are roughly one order of magnitude slower. How much exactly depends a lot on the Filer implementation you are on.

You may also take a jitter hit: The latency of distributed storage is often not only higher, but also more variable. If you are not pushing the limits of what is possible, that is often not an issue, but for some latency-sensitive applications it may well be.

Distributed storage also comes with some overhead in the sense that there is storage duplication at the filer end: 1 TB of database will never be 1 TB of disk space, but always more.

How much exactly very much depends on the Filer implementation, and on how much additional latency from software trickery you can tolerate. For example, most filers will store data in some kind of RAID, so there will be an overhead of 3x (everything is stored three times in HDFS and Ceph by default), of 2x (a simple RAID-1) or of 1.something (a RAID-5/6/x or Hadoop Erasure Coding).

Some Filers will, at the cost of additional latency, also offer data compression, or data deduplication.

Filers are, in essence, just computers with very many hard disks and very good Ethernet interfaces.

A Filer on the other hand offers a number of advantages over Local Storage that are mostly interesting if the amount of data is so large that it takes very long to copy:

We run our databases on local storage, because it is faster, has more consistent performance, uses less power, is cheaper, and is generally leveraging the flexibility of the large, cheap frontend pool to our advantage.

This is safe, because together with Oracle MySQL we developed GTID-based replication, which together with Orchestrator gives us complete flexibility and control over the replication topology, enabling warm and fast switchovers. This is around 20x faster than active/passive replication pairs we used before, and reduced a lot of daily operational toil for the DBA team.

We recommend the use of distributed storage for large database sizes, but latency considerations apply.