Where I work, there is an ongoing discussion about test data generation. At the moment we do not replace or change any production data for use in the test environments, and we don’t generate test data.

That is safe and legal, because production data is tokenized. That is, PII and PCI data is being replaced by placeholder tokens which can be used by applications to access the actual protected data through specially protected access services. Only a very limited circle of people is dealing with data in behind the protected services.

Using production data in test databases is also fast, because we copy data in parallel, at line speed, or we make redirect-on-write (“copy-on-write” in the age of SSD) writeable snapshots available.

Assume for a moment we want to change that and

Assume we make a copy of a production database into a test setup. We then prepare that copy by changing every data item we want to mask, for example by replacing it with sha("secret" + original value), or some other replacement token.

Why are we using a hash function or some moral equivalent for this? We want to keep referential integrity, of course. So each occurence of Kristian Köhntopp will be replaced by 9697c8770a3def7475069f3be8b6f2a8e4c7ebf4, a predictable and stable value, instead of a random number 17 on the first occurence, and another random number, 25342, on the next.

In short, while copying data is fast, masking data has a much, much higher cost and can nowhere run at line speed, on any hardware.

Reducing the amount of data

Early in the company history, around 15 years ago, a colleague worked on creating smaller test databases by selecting a subset of production data, while keeping referential integrity intact. He failed.

Many others tried later, we have had projects trying this around every 3 to 5 years. They also failed.

Each attempt always selects either an empty database or all of the data from production.

Let’s try a simple model: We have users, we have hotels, and they are in a n:m relationship, the stay. 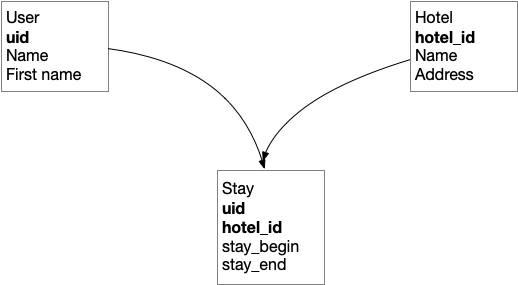 Limiting the timeframe can help: we select only data from the past week or something. But that has other implications, for example on the data distribution. Also, our production data is heavily skewed in time when it comes to operations on availability – a lot of bookings happen in the last week.

While we can copy data at hundreds of MB per second, up into the GB/s range, importing data happens at single digit MB/s up to low tens of MB/s. A lot depends on the availability of RAM, and on the speed of the disk, also on the number of indexes and if the input data is sorted by primary key.

You need to have the list of referential integrity constraints either defined or inferred from a schema. At work, our schema is large, much larger than a single database or service – users in the user service (test user service, with test user data) need to be referenced in the reservations service (test reservations service with test bookings), referring to hotels in the test availability and test hotel store.

That means either creating and maintaining a consistent second universe, or creating this, across services, from scratch, for each test. One is a drag on productivity (maintaining consistent universes is a lot of work), the other is slow.

Consistency is not the only requirement, though. Consistency is fine if you want to test validation code (but my test names are not utf8, they are from the hex digit subset of ASCII!).

But if you want to talk performance, additional requirements appear:

A database benchmark I lost

The german computer magazine c’t in 2006 had an application benchmark described in web request accesses to a DVD rental store. The contestants were supposed to write a DVD rental store using any technology they wished, defined in the required output and the URL request they would be exposed to in testing. MySQL, for which I worked as a consultant, wanted to participate, and for that I put the templates provided into a web shop using MySQL, and tuned shop and database accordingly.

That is because I used a real web shop with real assumptions about user behavior, including caches and stuff.

The test data used was generated, and the requests were equally distributed: Each DVD in the simulated DVD store was equally likely to be rented and each user rented the same amount of DVDs. Any cache you put into the store would overflow, and go into threshing, or would have to have sufficient memory to keep the entire store in cache.

Real DVD rental stores have a top 100 of popular titles, and a long tail. Caching helps. In the test, caching destroyed performance.

Another database benchmark I lost

Another german computer magazine had another database benchmark, which basically hammered the system under test with a very high load. Unfortunately, here the load was not evenly distributed, but a few keys were being exercised very often, whereas a lot of keys were never requested. Effectively the load generator has a large number of threads, and each thread was exercising “their” key in the database – thread 1 to id 1 in the table, and so on.

This exercised a certain number of hot keys, and waited very fast on a few locks, but did not actually simulate accurately any throughput limits. If you exercised the system with more production-like load, it would have had around 100x more total throughput.

Producing masked or simulated data for testing is around 100x more expensive computationally than copying production data. If production data is already tokenized, the win is also questionable, compared to the effort spent.

Producing valid test data is computationally expensive, especially in a microservices architecture in which referential integrity is to be maintained across service boundaries.

In the end, the actual test environment is always production, and in my personal professional experience there is a lot more value in making testing in production safe than in producing accurate testing environments.