The subtitle of “Sid Meier’s Memoir!” is “A Life in Computer Games”. And that is exactly what we get: Sid Meier lists, chronologically and very systematically, all the games he has been working on during his lifetime. And tells us what happened to him, the game and the game development process while he worked on it. Somehow that becomes a Memoir, even if some things are only implied or appear out of order. 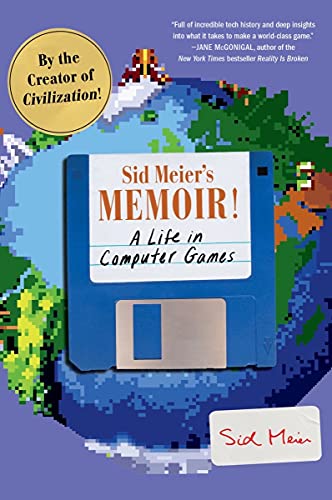 Born in 1954, Sid Meier is a prolific writer of computer games. Together with Bill Stealey, he funded Microprose in 1982, and write a number of flight simulators - among them Solo Flight and F-15 Strike Eagle. Growing tired of flight sim, he eventually “invents” the turn based strategy category of games by writing Pirates and Civilization.

Leaving MicroProse after it merged with Spectrum, he funded Firaxis, and was able to pick up the Civilization trademark and some co-developers dissatisfied with MicroProse. They were able to continue Civilization and turn it into what is has become today.

The book is, as promised, some kind of Memoir and a fun read. It also gives some insight into Meiers thought processes and what is important to him in game development. An interesting person, producing an interesting and insightful book.