A friend of mine wanted to provision BGP passwords for their Arista switch configuration.

So a config stanza such as

requires generation of the Password (actually “supersecretpassword”) in an encrypted form.

Arista switches can do this using CLI tools, apparently. They seem to have an onboard Linux, which seems to provide limited tooling, but is good enough to run a 32-bit Python 3.7. Arista provides modules to help with handling their configuration. Ryan Gelobter documented these in an article on Medium.

Unfortunately, these modules are not well portable. They have been implemented in a CPython module for Python 3.7 on i386 (32bit) Linux. They also have a lot of dependencies to other shared objects that are not easily available except in the switch environment.

So, if you wanted to provision switch configurations, you would need to run some code on the switch to generate the passwords the way Ryan Gelobter documents, or do the same in a virtual machine with a virtual switch running in it.

Looking at the DesCrypt.py is not particularly helpful: The code in it does little more than

and _DesCrypt is actually _Descrypt.cpython-37m-i386-linux-gnu.so. Well, at least it is only 10 KB in size, so how hard can it be?

Let’s have a look:

When we drop the module into Ghidra, we get to see a PyInit__DesCrypt(void) symbol. The code in that function just calls out to PyModuleCreate2(&PyModuleDef, 0x3f5).

Looking at the PyModuleDef requires the documentation to properly understand what is going on. We identify two functions, cbcEncrypt and cbcDecrypt by their PyMethodDef entries. Two labels for entry points in a stripped binary identified. 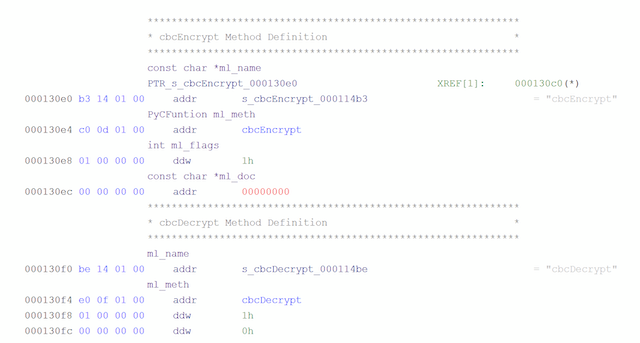 Looking at the cbcEncrypt function shows us that it has a dependency on cbc_crypt(), and that seems to be a function from libc, according to the manpage . So it is ancient DES, in CBC mode that is being used. We should be able to do this in pure Python without many additional dependencies then.

Using Ghidra more, we can decode cbcEncrypt() and the getHashedKey() function it calls.

getHashedKey generates the key the usual way, by xor-ing the incoming string with itself in an 8 bytes long ring buffer, but the starting value is not all zeroes, but some magic value (238ad5f51ec9a8d5)

Also, cbcEncrypt pads the data to an even 8 byte boundary as required by DES. How much was padded needs to be embedded in the ciphertext. There is a selection of standard methods for this, as offered for example by Crypto.Util.Padding.pad() in pycryptodome (“pkcs7”, “iso7816” and “x923”).

cbcEncrypt uses none of these standard methods, and implements its own method: the padding is encoded in the high nibble of a fixed magic int.

That magic int is always prepended, even if no padding was necessary: We get ?ebb884c, with ? indicating the number of padbytes (0 to 7). 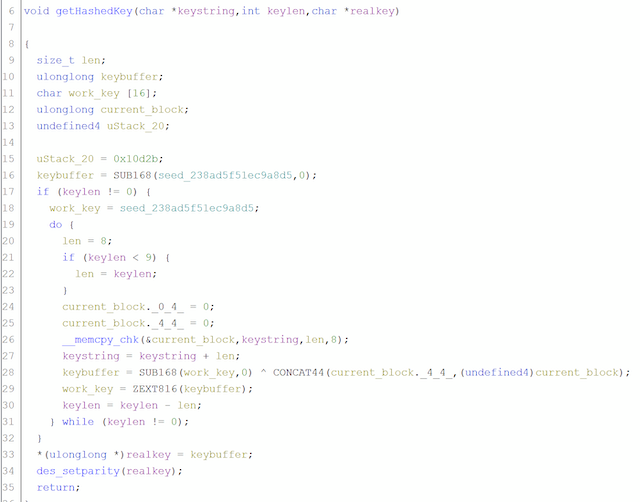 Ghidra Output of the getHashedKey() function, with a bit of annotation and typing added to get a better view.

With this information, we should be able to recreate the function in our own C-code and check if it can recreate the examples Ryan Gelobter provided.

Of course, it does not.

We need to debug, and in order to be able to do that we need to be able to load and isolate getHashedKey() first. The original version, to check what the actual hashed key should look like, and compare the result to our own.

That should be easy: An example from 2005 (german language article) shows

That final piece of code will serve us well: We want to load the _DesCrypt module and call getHashedKey() in an isolated context to see what a correct return value looks like.

Turns out, loading _DesCrypt...so is not so easy, because of a dependency on libtac.so.0.

So we are missing two libraries:

A minor roadbump: We need to build for 32-bit, but on a 64-bit machine. The compile-flag -m32 does that, but it will fail due to some missing includes until we install gcc-multilib as shown above. We can then download the old version of Python, and build it with the required flags for 32-bit support.

The libtac.so.0 we could copy off the switch. If we try, things escalate quickly . That is, because that .so in turn loads even more libraries, most of which we don’t have access to. And if we had them, they might load even more dependencies.

Looking into Ghidra again, we know that the code we are interested in does not really depend on libtac,so.0. cbcEncrypt() itself does, but only if something goes wrong and an exception is being raised, but at this stage of our investigation we only want getHashedKey().

Following the guide from 16 years ago, we can quickly write some code to dlopen() the library:

That way we can inspect the output of the function (it overwrites the first 8 bytes of data) and get a reference key value to debug against. Or could, if that would work. It does not, because the .so we open still has listed libtac.so.0 as NEEDED and we need to fix it.

There are many ways to edit ELF binaries, but most are badly maintained. An easy way is a web service such as elfy.io . We upload the library, click Load information -> Loader directives and edit the first dependency (libtac.so.0) (offset 0x270) to point to the second dependency (libpython3.7m.so.1.0 (offset 0x283) instead. Downloading the code again, we can rename it to libtest.so and load it with our test program from above, getting a reference key value. So mydevices_passwd in a non-broken implementation yields the raw key value of 4A 0E 5D 1A 70 4F 1F 23 for DES.

Having that, debugging can continue. It turns out: math is hard and Intel is a little-endian architecture: The seed byte sequence D5 A8 ... 8A 23 is of course the long 238A…A8D5. I am definitively not doing these things often enough anymore to not make this kind of mistake.

Having a working getHashedKey() we can now look at cbcEncrypt() and reverse that. 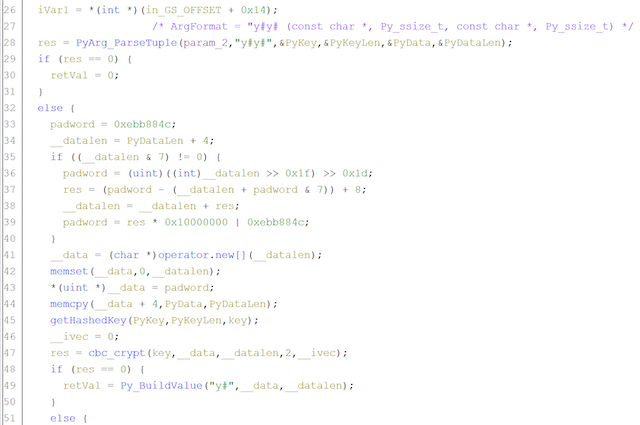 The heart of cbcEncrypt() fetches two Python bytearray, key and data and works with them. The key is processed with getHashedKey(), then cbc_crypt() is set up and called. The result returned to Python using Py_BuildValue.

The moment we try to build this in C, it proves frustrating again: cbc_crypt() is no longer part of libc. It is outdated, legacy, but unfortunately still in use. Not only by Arista, but also other companies and protocols. Among them some ancient RPC protocols. It has been removed from libc and moved to libtirpc3, it seems. We need to install libtirpc3, libtirpc-dev and libtirpc-common to be able to build code that calls cbc_crypt(). Even then we seem to be limited to static linking, because for some reason the shared objects do no longer export the symbol.

In the end we get code that reproduces the expected result.

If, and that is important, des_parity() is being called. In Python that function is not available, and should not be necessary: The legacy DES function in Python’s module supposedly ignores DES parity bits automatically.

But the Python code produces a different result. So what goes on here, and how do we get des_parity()?

Turns out, des_parity() is really weird code: Look at it here . It is supposed to make the 8 bytes of the DES code uneven parity by manipulating the low-value bits in the key. But the actual code also effectively masks out the high order bit, so we do not get 56 bit of keyspace, but only 48 bit. Yay, export crypto?

Anyway, this is the code Arista runs for their key obfuscation, so we need to duplicate it to produce correct data.

Here is a PoC in Python.

With the poc provided, it should be possible to

and that should be sufficient to build an Ansible module for Arista config provisioning. The code uses cryptography or pycryptodome automatically, one of the two is installed. It is not dependent on the legacy cbc_crypt() function that formerly was in libc.

Encrypting and decrypting BGP passwords requires a passphrase. In EOS, this passphrase is not static, but depends on the neighbor where the BGP password is configured.

The passphrase is generated by taking the string after neighbor (in this example mydevices), and appending the string _passwd to it. The string can be the name of a peer group, an IPv4 address or an IPv6 address, and has to be used as shown in the device configuration output. This is particularly important for IPv6 addresses which have multiple forms of representation.