Like I said, I never had much reason to use table compression, and only recently looked into the topic. MySQL Page Compression looks a lot easier at the database end of things, but relies on hole punching support in the file system. Let’s have a look at what that means.

Files, Inodes and Arrays of Blocks 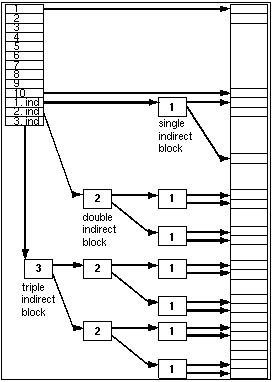 The block list inside an array is folded multiple times, to optimize for the more common case of small files.

While the folded block array of the original file system served us for many decades, more modern file systems try to shrink these block lists by storing extents. An extent is a pair (start, length) that describes a contiguous sequence of blocks. On a mostly empty disk, most files can probably be arranged in such runs of contiguous blocks, so this is a more efficient way to store things. Also, free lists can in many cases be stored more efficiently as extents.

The XFS filesystem is getting a lot of mileage of such extents, and one major a difference between the Linux ext3 and ext4 is the use of extents instead of block lists and bitmaps in many places.

Unix always allowed you to seek past the end of a file and write data. The following example program creates a file named testfile by opening a new file of length 0, seeking to the position 20 GB and writing an integer at that position. The resulting file is 20 GB in length, but only occupies a minuscule amount of disk space. This is called a sparse file, a file with holes in it.

Reading a sparse file, the non-existent blocks are returned as blocks filled with zeroes. On writing, space is allocated for the previously unallocated blocks in the sparse file, but probably not in sequence. So on hard disks, a seek occurs that would probably not have occurred, had the file actually been written properly.

When looking at this on the disk we can see that in fact only 4 KB of disk space (one block on a modern disk) has been allocated.

We compile the C-program with cc -o sparseme sparseme.c, then run it as ./sparseme. We look at the resulting testfile with ls -lsh testfile. The size of the file is shown as 21G, but the allocation (in the leftmost column, we asked for that with the -s flag) is only 4K.

Using the XFS maintenance program xfs_bmap in verbose mode, we get to see the block map (bmap) of the file, as an extent listing. The program operates with sectors of 512 bytes, the unit that was common for many hard disk before we moved to 4K sectors. We see a large hole from offset 0 to 41943039 (times 512 bytes for sector size, this is 20 GB). Then there are 8 sectors (one 4K disk drive hardware block) mapped to 8 contiguous blocks (actually one hardware block) at 104705904 from the start of the partition.

We can do the same thing using a dd command without writing a C-program:

Our of=testfile2 generates the outfile, and we write one byte (bs=1) one time (count=1) after seeking to position 20G (seek=...). Using ls -lsh and the xfs_bmap output, we can confirm that this is indeed a file with a hole.

Sparse files are hard to handle: When you copy them, the non-existent blocks are read as blocks full of 0-bytes, and written. The target file will therefore actually allocate all the space the source file only claims to be large.

This is a problem with core files in many Unix system, because they are being dumped as sparse files, mapping the actual process address space to file offsets, and leaving unallocated space in the address space at least in part as holes in the file. Until you naively copy that file, that is.

The GNU cp program has a --sparse option that tries to handle this, and rsync also has special options that make it sparse file aware.

Some filesystems allow you to punch holes into files, using the fallocate(2) system call. This system call can be used to assign blocks to a file, making sure it is not a sparse file, without actually having to write all those bytes and a few other things. Using the filesystem dependent FALLOC_FL_PUNCH_HOLE flag, extents in the file can be marked as ‘unused’ and be given back to the filesystem.

Let’s look what our tables from the previous article look like on disk, using xfs_bmap.

We get more than 30k extents here, all of them 8 sectors (4K) of data and 24 sectors (12K) of hole in my very compressible test data. This is messy.

Trying to delete these things demonstrates the cost of this:

With longer files, we get more holes, more overhead and even longer times.

While running insert into keks2 select * from keks, I was monitoring the size of the new table at the file system level. This looks funny, because we can see the file’s allocation growing over time, but there are downward spikes in allocation every few seconds.

The size of these downward spikes (several megabytes in some instances) is impressive.

Page Compression was introduced to MySQL in 2015, and Mark Callaghan has been experimenting from early on. He has a series of blog articles on this:

and being Mark, he also has a series of bugs open on this. The links are in the articles.

The “Wanted” article from the list above contains a number of very recent, very relevant comments by Marko Mäkelä, and a link to LWN: Hole-punching races against page-cache filling , from July 29, 2021. This bug is still open in all production Linux kernels.

This seems to make using Page Compression a risky and expensive thing. Mark’s estimate in private communication was approximately “a thing such as RocksDB which never overwrites data has an inherent advantage over anything that does in-place updates when it comes to compression” (my summary of his words), and I think he’s correct.

Seems I accidentally did a few things right when I never even tried to use compressed tables in InnoDB.

Thanks, Mark, for you very useful and insightful comments, and for nudging me to go deeper on this. And thanks for necro’ing Marks articles with your comments, Marko!