Ram V is a writer, sometimes for comics. Together with artist Sumit Kumar he wrote a simple story: English Vampires vs. Indian Rakshasa. 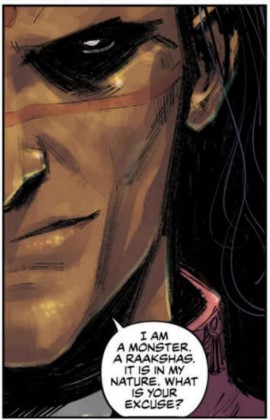 The 1760’ies. An english vampire puts his peers at risk by not having his desires under control, and is exiled to Calicut, India. He soon finds out that even older and fiercer beings rule the night: Rakshasa, the Vampire equivalent of Indian Myth.

Bishan, a Raskshasa, kills the vampire, drawing the english vampires out for revenge. Before the background of a colonization war in India, Bishan and the vampire master Jurre Granno clash, first in India, then in England.

Fantastic illustrations, and a complex story well told, with rich metaphors, showing a clash of cultures and the infighting in pre-colonization India.

As a comic, the kindle edition does not read well on a Kindle, but works fine on Kindle for iPad or similar devices.