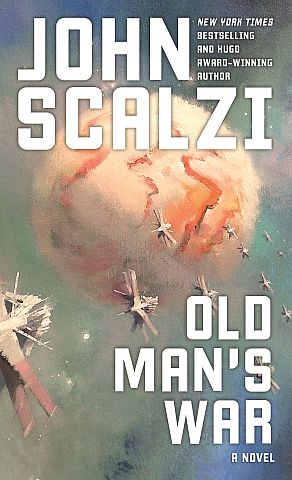 The plot premise is weird, but simple: Humanity has taken to the stars, but with private enterprise. Basically all advanced space technology is controlled by the Colonial Union. Life on earth on the other hand goes on almost as before.

John Perry enlists to serve in the Colonial Defense Force at the age of 75, to protect humanity, but mostly to have the CU fight the effects of him aging with some unspecified Scifi tech. He leaves earth and during his induction to the CDF learns that he will be indeed rejuvenated, by transferring his consciousness into a new, young, genetically engineered body tailored for planetary combat.

Perry’s first tour of duty sees battles on a number of CU planets and fights against various interstellar races. He soon learns that the CU is not actually involved much in galactic politics and has only limited knowledge about the background and motivation of the various space-faring intelligences.

A fight against the man-eating Rraey leaves him wounded and left for dead on the contested planet Coral. He is found by a member of the Ghost Brigades, Jane Sagan, that he thinks looks like a younger version of his deceased wife Kathy, and befriends her. He learns that Ghost Brigades are synthetic humans created from the DNA scans of CDF volunteers that died before they could join the CDF, but without the memory and experience of their human predecessors.

While technically Mil SciFi, and therefore a genre I despise, Scalzi manages to keep the focus the story on the characters and their interactions instead of troop movements and space battles. He is playing with the themes of generic engineering, encounters with alien races and the discovery of their motivation, and with building a connection to an image of a loved one, but without the memory and the shared experiences. An engaging book with characters I can relate to, and a story well told.

Old Man’s War is continued in The Ghost Brigades and in The Last Colony , finishing the John Perry’s viewpoint books.

The story of “The Last Colony” is being retold in Zoe’s Tale from another character’s viewpoint.

The Human Division then continues the original storyline, from another characters point of view, dealing with the aftermath of the revelation of the CU’s scheming with earth politics. Humanity finally joins the emerging galactic society and must find a place in one of the various alliances that the different intelligent species begin to form. The resulting diplomatic complications are further told in The End of All Things in a series of Novellas from different character viewpoints.

All in all a series very worthwhile reading, exactly sufficient for one vacation.