This 2018 book in some aspects is already outdated: Silicon Valley Techbro Kai-Fu Lee describes what AI is and what he thinks it will do to our future, the nature of work and the job market. But since then, the worlds view on what AI can and cannot do, what the problems to solve really are and a lot of other things have changed. 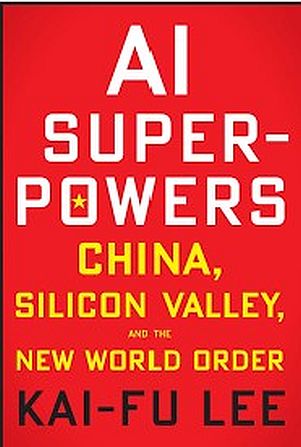 Kai-Fu Lee is a Taiwanese born, American computer scientist, and worked at Apple, SGI, Microsoft and Google before becoming a venture capitalist in China.

He coined the adage “If data is the new oil, then China is the new Saudi Arabia” and in the books proposes that China has several advantages over the US in an arms race over artificial intelligence: Generally training deep learning models seems to be better suited to the Chinese approach of brute forcing a solution than to deep engineering; China has few data protection regulations getting in the way of data collection; Chinese startup culture is even more aggressive than the US one; and the chinese government funds and steers the startup industry in China into the AI of AI.

Lee believes that a number of jobs will be modified or eliminated by a potential AI revolution, including a number of white collar (office) jobs. The examples he gives are jobs that consist mostly of - in his opinion - simple pattern recognition, such as rough translator, bank loan officer or customer care worker. Similarly, the blue collar (worker) jobs at risk are truck driver, cashier or clothing factory worker. In a way, three years later, his estimates look overly optimistic: Self-driving cars are further away than they looked three years ago, and automated customer care with natural language recognition quickly transformed into the voice-mail hell as ten or twenty years ago.

What is true is that AI can support human workers a lot in taking the boring parts of these jobs away, helping to provide rough estimates and marking clear cases as such. Still, AI in 2021 seems to be successful where it augments human workers instead of completely replacing them. In general, Lee’s view of the world is very mechanistic, and way too optimistic in what AI can actually completely solve without having a complete model of the world it acts in.

Important input and still a good overview, but overtaken quickly by the real world.