“Outland ” is the first book by Dennis E. Taylor, preceding the Bobiverse and also “The Singularity Trap”. It is a “Sliders ” storyline, much like Pratchett’s and Baxter’s “Long Earth” , in which our heroes discover a parallel dimension with a seemingly uninhabited earth, and then need to colonize it. 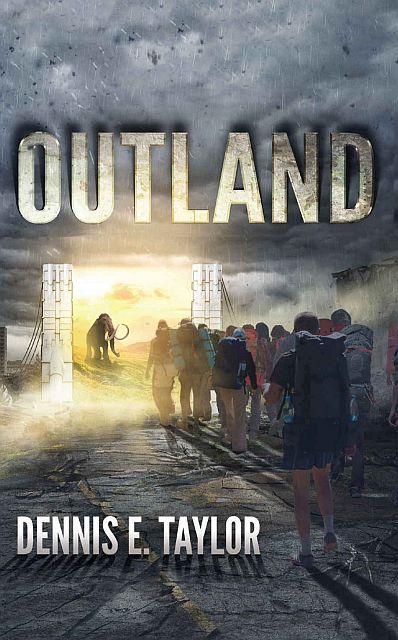 Dennis E. Taylor is a computer programmer writing Scifi, and had problems finding a publisher for his debut novel, “Outland”, in 2015, so he self-published. The story was intended as the introduction to a series of books, “World Lines”. The original novel was withdrawn in 2018, extensively reworked, and re-publshed in 2019 as a standalone book, which is the version linked in this article.

The story follows an ensemble cast of students that through a failed physics experiment manage to open a dimensional portal into a parallel earth, which differs from this earth mostly in that it is seemingly uninhabited. While the students come up with schemes to get rich quick by mining gold in the parallel earth and somehow selling it locally, a global catastrophe strikes: The Yellowstone Supervolcano activates, covering most of the United States in ashfall and changing climate globally.

Our students now use the portal to evacuate a number of people to start a colony in the wilderness of their parallel earth. But bootstrapping human civilization from basically nothing with contemporary humans seems to be harder and more dangerous than anybody thought.

The original book showcased early Dennis E. Taylor, but unpolished. The nerd humor and the the writing style were already somewhat there, but the characters were flat and a lot of things were still raw. The rewrite fixes this, and also makes the book more standalone, while still letting the door open to optional sequels.