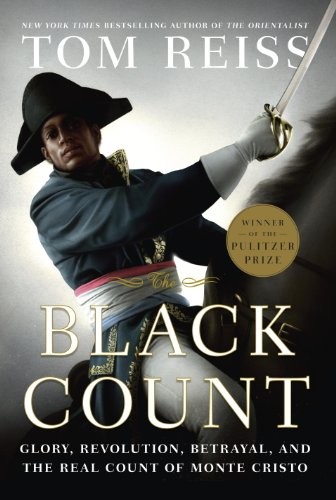 Alexandre Dumas, the author of “The Three Musketeers”, “The Count of Monte Cristo” and many other books, is one of the most read French authors. He had it easy coming up with stories, because his father had one of the most unusual and wildest lives imaginable. Dumas was, in a way, telling episodes from his fathers adventures, toned down to become more believable, in some of his stories.

Thomas-Alexandre was born on the French colony island Saint-Domingue (now Hawaii). His father was the French Marquis Alexandre Antoine Davy de la Pailletterie. His mother Marie-Cessette Dumas, an enslaved woman of “Afro-Caribbean” ancestry, which means that she or her ancestors were enslaved somewhere in Africa and forcibly brought to the Island. Not much is known about her actual origin or history.

His father, very broke, returned to France, where Thomas-Alexandre was legally freed: in France, slavery was prohibited since 1315, in the colonies not so much. He was educated in a military school and then joined the army as a young man. He also started to use his mothers name after he fell out with his father.

Dumas entered the military at the age of 24 as a private, but quickly rose in rank. This was not only due to his bodily fitness, his incredible fighting skills and his immense organisational talent, but also due to the wealth of opportunities that the upheaval of the French Revolution of 1789 offered, 3 years into his military career. He held the rank of a General-in-Chief over the 53.000 troops of the French Army in the Alps, at the age of 31. Among his soldiers, he was known for upholding the ideals of the French revolution, Liberty and Equality, and the ideals of Humanism.

He served under the orders of the commander-in-chief General Napoleon Bonaparte in Milan in 1796, clashing with him over plundering and expropriation policies. He also fought with Napoleon’s aide-de-camp over similar matters of fairness and courage in battle. Despite that, he joined Napoleon’s Egyptian expedition in 1798, and became the cavalry commander of the French Army of the Orient. The conditions of the march from Alexandria to Cairo were harsh, and Dumas discussed with other french generals if they would refuse to march past Cairo. Napoleon later learned of that meeting, accused Dumas of treason and forced him to return to France on an unsound vessel. The ship sank slowly during the trip, and was forced aground in a storm near Taranto in Naples. Naples Cardinal Fabrizio Ruffo imprisoned Dumas and his fellow travellers for two years. In jail, Dumas was permanently injured due to infection and malnourishment. He died in 1806, five years after his release, from stomach cancer, at which time his son Alexandre Dumas was 4 years old.

General Thomas-Alexandre Dumas story easily has sufficient material for several of the stories his son wrote, and his son in fact used parts of his fathers biography in several of his stories.

Before Reiss’ well researched book the life and exploits of this colorful hero of the French Revolution were almost forgotten. Reiss’ storytelling brings us back the story of Dumas, who lived through one of the most exciting parts of French history.