The story of Heaven’s River , stranding in and then exploring an alien megastructure, is one that has been written before: In Niven’s Ringworld , Clarke’s Rama , and Farmer’s Riverworld . John Varley’s take on this, very seventies, is Titan , Wizard , and Demon , the Gaia Trilogy. 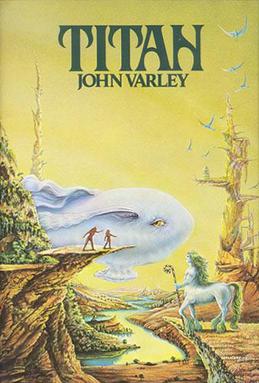 Cirocco Jones is the Commander of the Earth science ship Ringmaster, and is right now approaching the orbit of Saturn, where she and her crew discover a new moon. As they approach the moon, they realize it’s a Stanford Torus like space habitat. Trying to find a way to dock, they come close and are being picked up by a giant tentacle-like arm, and dragged into the station while their ship is being destroyed.

As Cirocco wakes up, literally naked and hairless, without any resources by the metal parts that are the remains of her spacesuit, she realizes that months have elapsed since the collision. She sets out to orient herself in the strange, but extremely habitable world inside the torus, trying to find her crewmates. She manages to find them, and realizes they, like herself, have been changed in the months that they have spend somewhere in the interior of the space station.

They learn that the station is indeed a living being, older than time itself, and it is falling apart as the central intelligence is dying and the twelve subintelligences in the torus are fighting amongst themselves for control. Exploring the Flora and Fauna, it becomes obvious that all life in Gaia is constructed and preprogrammed, and at least sometimes under control of the central intelligence.

Cirocco, and her surviving shipmates, are trying to reach the centre, climbing up one of the giant, kilometres thick cables that hold the torus together. On their way they learn that some of them have been changed beyond the point of sanity, and fighting starts. Cirocco manages to get to the center, and is offered to be Gaia’s “Wizard”, her repair agent in torus world.

In the further books, this is expanded - Gaia establishes herself as a nation in the Solar system, opening a Consulate and offering medical miracle cures to humans that make the trip to Saturn and Gaia. It becomes clear that Gaia is terminally old, going slowly insane by age and boredom. Cirocco and Gaia fall out, and go to war with each other, Cirocco no longer being the “Wizard”, but the “Daemon”. During these events, Gaby, Ciroccos shipmate and later partner, is being killed.

The story then turns into more of a Zombie movie, in which a completely crazed Gaia goes to war on the humans, and the creatures of her that managed to emancipate themselves from her waning control. It comes to light that Gaia recorded the personalities of the captured Ringmaster crew, and that Gaby’s mentral recording has become some kind of agent in the hardware that represents the actual Gaia in the center of the Titan ring.

In a final confrontation, Cirocco raises an army from the ring inhabitants loyal to her, conquers Gaia’s forces, and manages to distract her sufficiently so that Gaby can take over the rings central hardware and bring the rebellious subsystems under her control. Gaby offers Cirocco to become a Wizard again, but Cirocco chooses adventure instead…

The story has the classic shape of this particular Sci-Fi trope, and is being echo’ed in part in multiple ways in Heaven’s River, but is also very typical in its 70-ies sex-and-drugs laden storytelling. It has aged well enough to be enjoyable to read again, but it is too long to read in one uninterrupted go, and also has lengths in the later parts.