Needle and Through the Eye of a Needle are books by Hal Clement. Hal Clement was a Hard Sci-Fi author born in 1922, and “Needle” was written in 1950 as his first book, for Campbell, no less, and sold to Doubleday. The followup was produced almost 30 years later, in 1978. 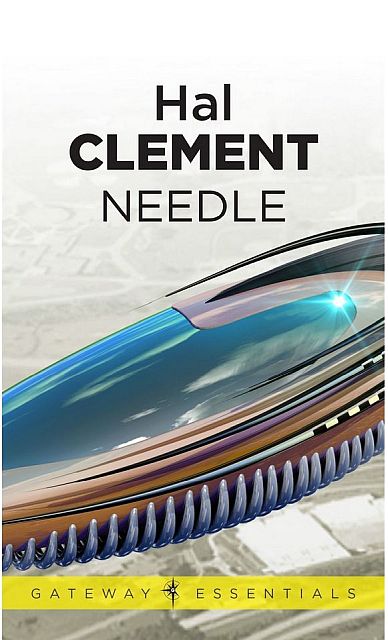 The story begins with two spaceships crashing into planet earth, some time in the 1950’s idea of a future, close to an island in the Pacific ocean. Both ships are mostly destroyed in the crash, but the inhabitants survive: A criminal, and a kind of headhunter/policeman. They are part of formless species that has much smaller cells than humans and that need a host from normal sized cells with which they live in symbiosis - at least those of the species that are not criminals.

The Hunter enters the body of Bob Kincaid, a post-puberty schoolboy that parties at the beach because it’s the end of the summer vacation. The Hunter needs time to orient himself in Bob, establish communication, and find of his current situation, at which point Bob is already firmly abroad on the American continent, in School. He now needs to find a way to get Bob back to the island, and then find the Criminal who may hide in anybody on that island.

We follow Bob and his symbiont through the case, exploring the life on the island, in a weird mix of Sci-Fi, Whodunnit and YA island life.

In the second part, Through the Eye of a Needle , Hal Clement returns to his characters. Bob has fallen ill, which should be impossible with the Hunter symbiont living in him, and it appears that he’s showing some kind of reaction to the presence of the Hunter himself. Help is needed from specialists of the Hunters people, but because the Hunter’s ship was destroyed in the crash that seems to be impossible.

Two old school hard Sci-Fi books, that, looking past the outdated role-models, are still interesting YA reads and have aged quite okay.