The Vanishing Middle Class: Prejudice and Power in a Dual Economy by Peter Temin analyzes the economical and political structure of the USA. Temin does this through the lens of the “Dual Economy ” Model. 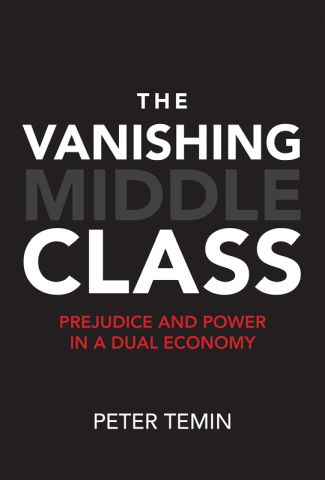 Dual Economies are normally prevalent in colonial societies of “less developed” countries. These countries usually have local production and production for a global export market, and besides economical and income structures around this separation, there are also social segration and a certain degree of isolation of the social groups from each other - in politics as well as attempts to prevent social migration into the higher ranked group.

Temin applies this thinking to the increasingly partisan politics and the underlying social development in the US. He is looking at what he calls the FTE sector (finance, tech and electronics), which makes up around 20% of the population and the rest. Middle class is also defined, in his case as 2/3 to 2x the median income ($40k to 120k p.a. in 2014). He shows how “membership” in the FTE sector is also happening along racial boundaries, but is not limited to this - “black” stereotypes are also tied to lower class “white” people. Temin also shows how the size of the middle class is shrinking, looking at the most recent 50 years of history. He then goes on to analyze politics and institutions, and how they align to cement and foster this process.

This is an exhausting read in more than one way: This is a science book and written to build a case, not to be easily readable. On the other hand, lots of sources and additional material are supplied. The kind of book you read at the desk with a browser open and not in bed. Also emotionally exhausting, because it shows the machinery of injustice at work, and in harsh detail.