Heaven’s River is the fourth part of the Bobiverse Trilogy, in which the original Bob finds a decaying alien megastructure, and investigates. 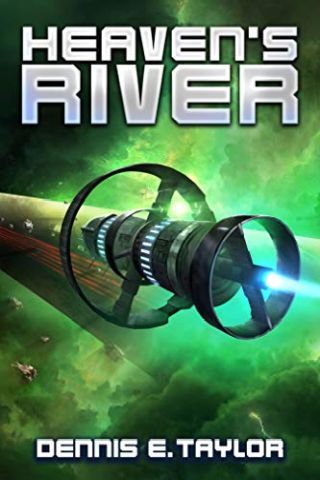 Previously in the Bobiverse:

Bob Johannson is a successful software developer, and cashes out. Then he dies, becomes a sentient spaceship and von Neumann probe, and then earth is almost destroyed in a war. Bob moves on, doing the von Neumann thing, and plundering the resources of foreign star systems makes more Bobs.

In this fourth part of a trilogy, Bob finds that the 20th+ generations of Bobs are very different from him, and have interests and ways of thinking he cannot or does not want to follow. Factions arise inside the Bobhood, and civil war breaks out. Because Bobs are von Neumann probes in a resource rich universe, the conflict is not over resources, but over first contacts and the relationship to the remnants of humanity and “other bios” that hold Bobhood back from becoming a truly starfaring race.

Meanwhile, Bob meets yet another race, and this one actually managed to build a ringworld-sized megastructure around their star, while at the same time being highly aggressive (and like humanity, destroying their homeworld). Bob controlled Androids infiltrate the megastructure and try to find the controlling intelligence as part of a rescue operation.

Entertaining, and still novel ideas after the original trilogy kind of came to an end. Some parallels to John Varley’s much earlier Gaea .