Children of Ruin is the second part of Children of Time by english Sci-Fi author Adrian Tchaikovsky. 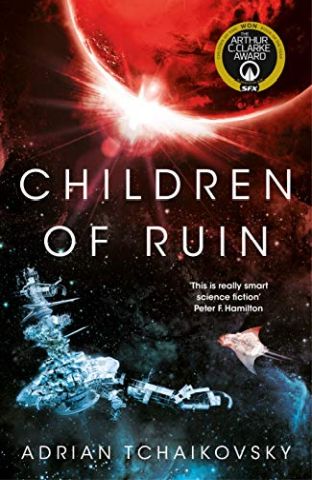 In “Children of Time”, mankind reached for the stars, almost succeeded and also almost died out. They did manage to create a digital lifeform, though, and also to seed and uplift life from earth on another world - just not the intended one. And so we ended up with a race of intelligent giant jumping spiders that manage to befriend the broken artificial intelligence orbiting their world and to rescue the remnants of humankind from themselves. Oh, and ant based computers.

This almost Peter-Watts-like eclectic and unlikely cast of characters is amended in “Children of Ruin”, in which a spider-human ship travels a radio source that suggests intelligent life, to find a civilisation of similarly uplifted octopodes at war with itself, and a planet with truly alien, non-terran life which at some point becomes aware of the various terran research groups.

Tchaikovsky again manages to pull off nonhuman characters in a way that reads interesting and relatable, while at the same time completely alien.