There was a question at work about MySQL backups and restore. I needed to explain more.

We use databases to make state persistent. That is: As a developer you can think of your database as a single giant, structured global variable with a weird access method, and to make things worse, concurrent access.

A database is just a global variable to your code

We can log statements that change the state of our database in a log. In MySQL, we call this The Binlog. 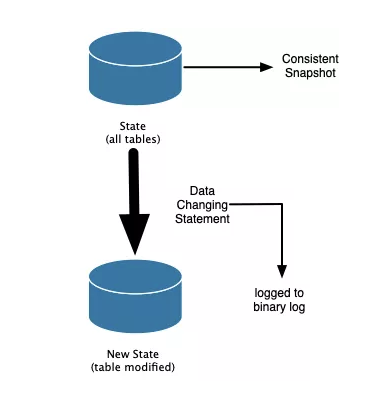 Making a change to the database, and logging the data changing statement to the binlog.

When we make a full backup of the database, we just copy away all tables in the data directory while the database does not change. This can be achieved by simply taking the server offline during the copy, or using more elegant methods that do not interrupt production, yet still look the same when done.

If the database does not change while we make the backup, the backup is internally referentially consistent, and it is associated with exactly one binlog position. And to keep things simple, the binlog position is just the pair (newest binlog filename, file length). So a binlog position looks like (binlog.000004, 7625) or similar.

The server will periodically start new binlogs: When it becomes too large, when the server restarts, or when we ask it to do so using a FLUSH BINARY LOGS command.

Each data changing transaction is being assigned a unique binlog position, and this way we also get a total order of all transactions (and that is becoming a problem later in the game). 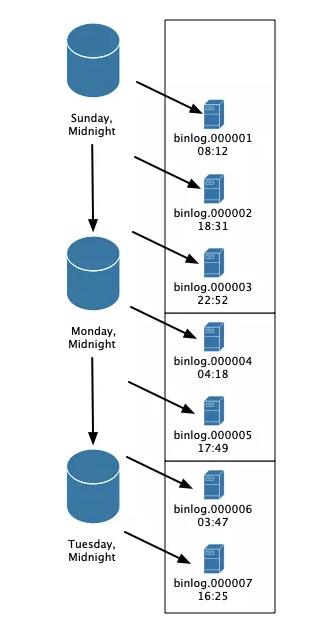 We can use the binlog to replay history

In complicated cases (We might have changed a table definition wrongly) we might need to replace the content of the binlog with alternate, edited statements. In any case we create a new, different and edited timeline that does not contain the mistake we made.

Replication is an ongoing live Restore

This is exactly the same process as with a restore and then applying the binlog that has been created since the backup was made. But with replication, it is live and ongoing as new binlog is being created. As a result, we get a cloned server that executes the same statements as its upstream parent, keeping its internal state a mirror copy of the parent.

We called the parent server a master back then, and a primary or source server these days. The cloned server was a slave back then and is now a replica.

Of course this simplistic approach has all kinds of problems, which then got corrected over time, making replication better, but also more complicated.

Early replication had a single thread downloading statements, and then applying them. Of course, some statements take longer than others to execute: a large ALTER TABLE can take hours to run, depending on the size of the table being altered. During that time replication stops and the binlog does not even leave the source server. This is a bit unfortunate should the source fail during that time.

So the very first thing that got changed is splitting the replication thread in two: The IO_THREAD downloads data from the source as quickly as possible, and writes it to the replica as the relay log. Even when the source goes down we still have our local copy.

The SQL_THREAD then reads the relay log and executes it in sequence, strictly maintaining transaction order. Whenever it finishes a relay log, it can delete that file and turn to the next one.

This logic, at the core, is unchanged even today: 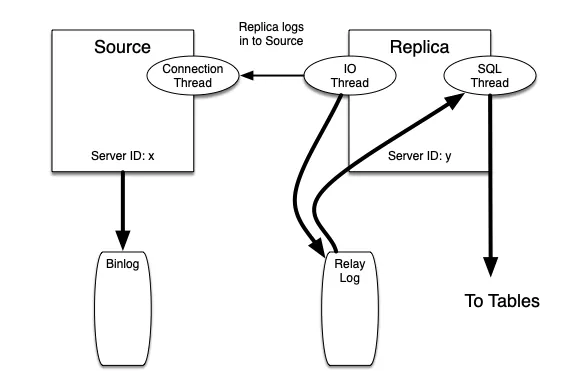 We call this kind of replication asynchronous: There is no feedback channel from the replica to the source, and consequently no way for the source to delay the commit and have the application wait until the data has left the machine.

Asynchronous replication scales well, even across long distance links: Applications write to the primary, and don’t wait. The replicas log into the source, download the binlogs and will eventually execute it locally on the replica. Applications reading from the replicas will read outdated state until the replica comes around and catches up.

The main risk is the source going down due to a fault before the binlog has been copied off. So one innovation is to make the source delay the commit until at least one copy exists on a replica.

This is Semi-Synchronous Replication, SSR, in MySQL, and it comes with a number of caveats:

Statement and Row Based Replication

MySQL replication logs statements in the binlog. Unfortunately, not all statements are actually replay-able, because they may not be deterministic.

MySQL knows this, and for the obvious cases logs additional code that makes them deterministic.

In the binlog, we find (editing out the cruft):

Despite the warning, this replicates well, and has done so for the last 20 years. What does not replicate well at all, ever, is stuff like UPDATE t SET x = x+1 LIMIT 10. As this lacks an ORDER BY clause, the server is free to order the row updates as it wishes, and can (and in NDB cluster actually will!) update 10 random rows, different ones on each instance of replication. It is the LIMIT clause that makes this non-deterministic.

Now that limitations of this approach are clear, we can see: We would be better off with logging the rows changed, instead of logging the statements that change them.

Counterintuitively, for the workloads we have at work, this is also 50% to 66% smaller than the statement itself, even before optimisation and compression.

(You would need to run mysqlbinlog -vvv to have the mysqlbinlog command decode the BASE64 for you).

Row Based Replication wraps the logged row in a special BINLOG statement, because the binlog can hold only statements.

This is interesting, because it tells us: There is no such thing as a Row Based Binary Log at all, the binlog can hold only statements. MySQL worked around this by implementing a BINLOG statement, which takes a single parameter. The parameter is a BASE64 encoded pre- and post-image of the row, a kind of binary patch to the data in the table.

Seeing this, I should be able to take this BINLOG statement and run it on the command line of my client:

To make a long story short: If you go back and pick up the preceding BINLOG command earlier in the binlog, and then this one, it actually works.

Also interesting: In the earliest versions of MySQL with Row Based logs, the BINLOG command lacked all access controls, so by handcrafting the appropriate patches, anybody could change all data anywhere with any permissions - MySQL did not anticipate that somebody would take replication-only special commands and run them on a regular command line. This bug is now a long time fixed.

Row Based Replication and Filters

Filtering the binlog is never a good idea: It will break your ability to perform point-in-time restores. Filtering the relay log can be done, but most of the config directives that do this are broken:

With group replication, which we do not discuss here, any filtering will break consistency in the group, so any filters are forbidden.

Row Based Replication and BLOB columns

Row Based Replication also fails in other interesting ways: Consider a table with a BLOB and a counter.

When you increment the counter, the entire row is logged, twice: Once as a pre-image, and once again as a post-image. You end up with 4 bytes integer changing, but two full copies of the BLOB, which can be very large.

We can use RBR in FULL mode, not only for replication, but also for Change Data Capture, to feed Hadoop and Kafka with it. On the other hand, with replication chains that are blobbyrequire NOBLOB or MINIMAL mode to not die on us.

Row Based Replication and Primary Keys

On the replica, the RBR image needs to be applied. For this, the replica needs to find the row. It uses the pre-image to do this, and when the table has no primary key defined, this can be slow - it ends up being a full table scan.

This is another fun cause of replication delay: Having a table of even moderate size without a primary key in a replication chain that uses RBR will delay the replica, and it will look very busy. The replica will eat a lot of CPU doing in-memory scans to find rows to change, in the most inefficient way possible.

Arriving at this stage took MySQL around 10 years:

It has taken MySQL another 10 years of changes to improve on this, with Global Transaction IDs, Parallel Replication and Group Replication, but that is for another article.