Sven Geggus trolled me . A bunch of nerds were speaking about what’s wrong with biking in Germany, and he wrote:

Tweet : Der @isotopp wohnt doch in Holland. Wo sind denn bei euch die Vorfahrtsregeln anders und könnte man da was sinnvoll für .de übernehmen? – @isotopp is living in the Netherlands. So how is the right of way different and how could .de learn from this?

Biking in the Netherlands does not suck, and that is not because of any specific traffic rules being any different, but because traffic is fundamentally different, and that somehow escalated. 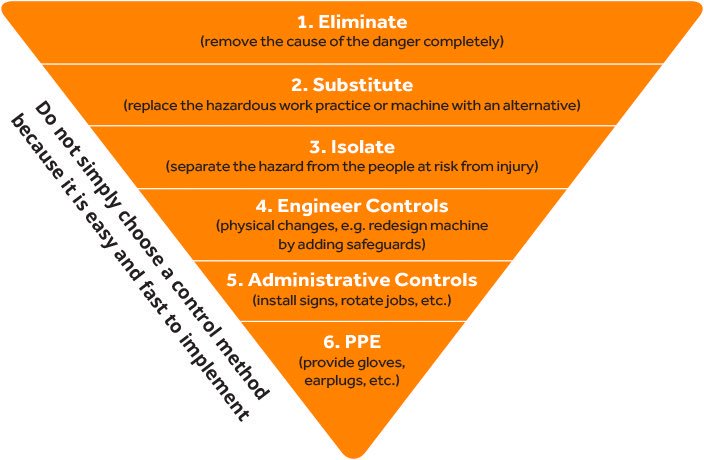 The OSHA hierarchy of mitigations.

The OSHA hierarchy of mitigations for safety risks, as shown here and approximately everywhere else where workplace safety and risks are discussed also applies to traffic risks. Of course.

How it came to be

There is the famous Guardian article that explains the history of Stop De Kindermoord and there is the video Namens De Kinderen Van De Pijp, 1972 that tries to explain and to capture the amount of outrage in the Netherlands in the early 70’ies regarding the destruction of the urban environment created by a car culture.

There is the infamous Plan Jokinen , which would have completely destroyed the old town of Amsterdam (which is now a Unesco World Heritage Site) and replaced it with a giant tumor of highway intersection, killing the city completely. Its realization was averted, thankfully.

Other cities were less lucky, and took heavy damage. 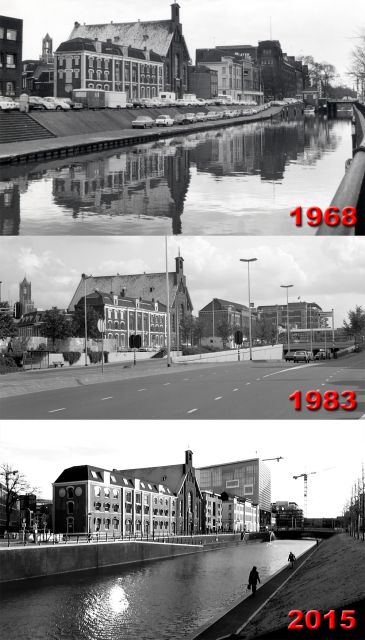 Utrecht Catharijnesingel was destroyed and turned into an Autobahn. It took more than 40 years to restore this part of the city to something not insane. Article at Bicycledutch .

In Amsterdam, the same story is told, slightly differently. We have Vijzelbuurt is changing here in this blog, explaining the construction of De Rode Loper as an extension of the Metro 52 construction. At station Vijzelstraat, the room between the street and the very deeply located metro station is now turned into a parking garage. On street parking will be dialled back or completely removed, and people that still want a car can rent space down there - but it will of course cost substantially.

The city of Amsterdam is about to remove 10.000 parking spaces inside the inner city. Video

What we currently are seeing in the Netherlands is the result of a fight. It took more than 10 years from the 1972 De Pijp video and the Stop De Kindermoord Die-Ins to visible, rideable biking improvements. That was 40 years ago, and when you ride through the Netherlands you can roughly see the decade the bike infrastructure was built when riding it. There have been learnings and improvements all the way.

Germany, right now, is building 1980’ies bike lanes, on a NL scale, using paint on streets. There is no physical separation, there are zero improvements in intersections. And that is the core of the problem: The critical parts are the intersections, see the OSHA hierarchy above, this is where people die.

And you cannot improve intersections with paint. You need an excavator.

Let’s bike from Hoofddorp Floriande to Vijfhuizen, and have a look at the scenery. Here is the video: 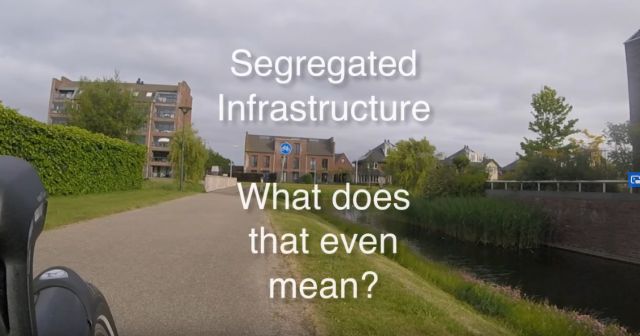 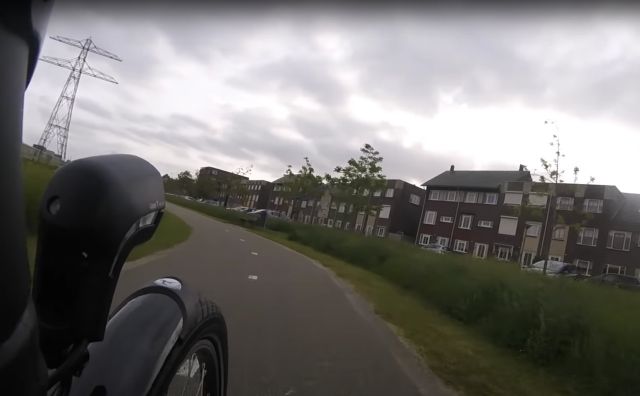 Typical bike lane in Hoofddorp. The bike path is segregated from any car lane, and is bi-directional. Cyclists can ride two-up side by side, and talk. 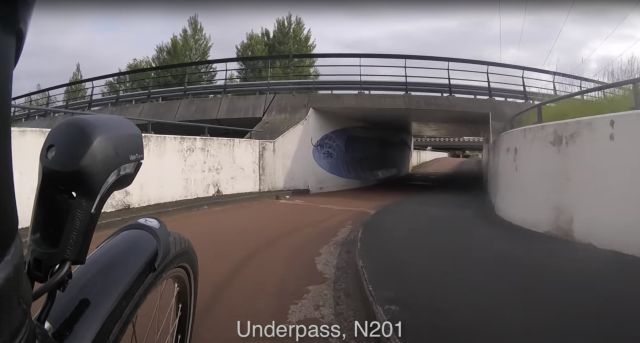 Underpass under the N201. The N201 is a multilane national road. It could have been a crossing with a traffic light, but building an underpass removes all risk to cyclists from cars. 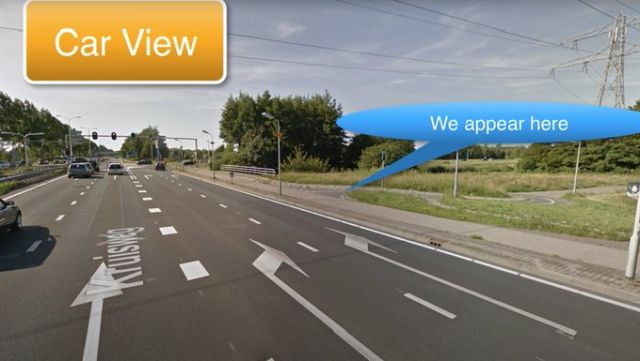 The same spot, as seen by a car driver. The bubble indicates where we emerge from under the road, passing the underpass. 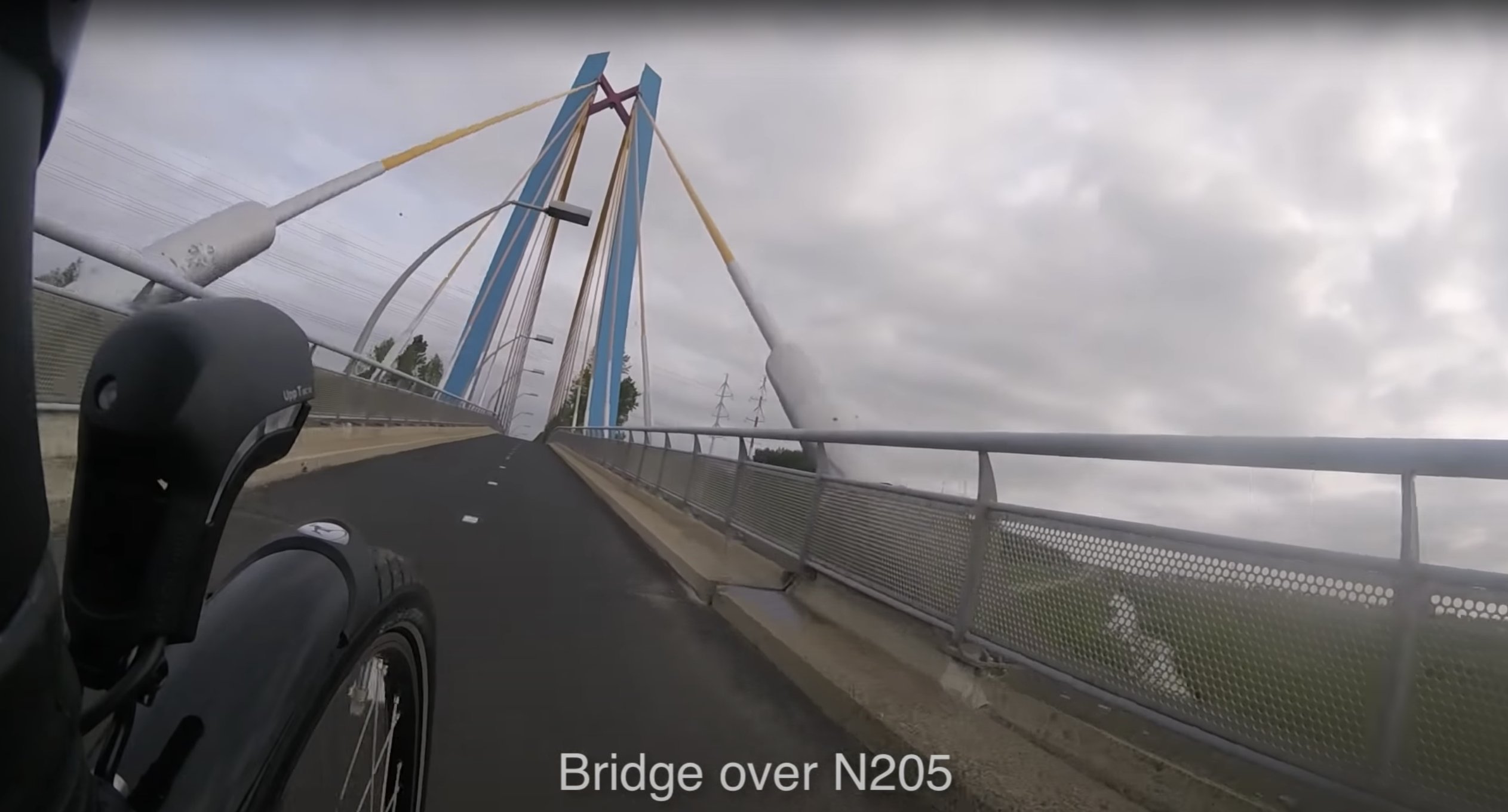 Later we pass over the N205, across the bike bridge. Underneath are 2x2 lanes of the N205 and the 2x1 lane of the reserved bus lane.

This is not an unusual trip in the Netherlands. In another article in this blog, we cycle shopping , and the experience is much the same. We never interact with cars.

But these bike paths are empty! 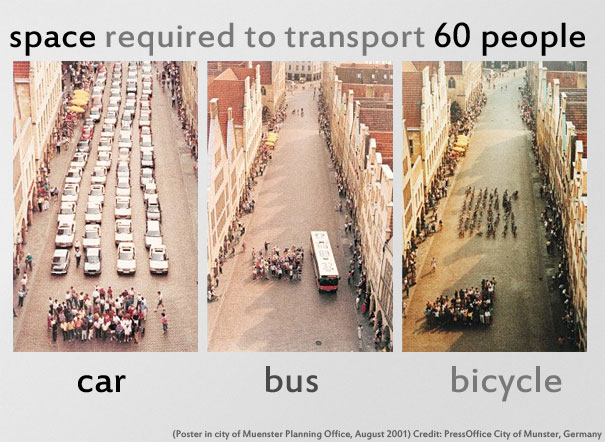 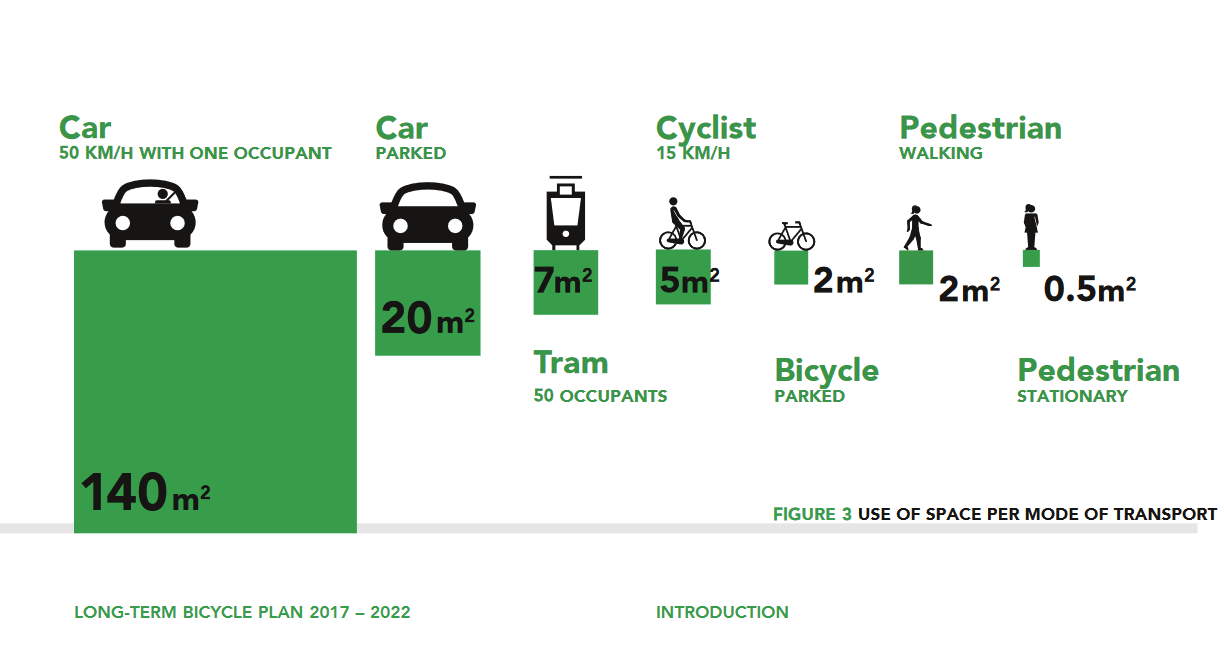 “But, Kris! Can you prove that bikes are used in the Netherlands?” Sure, let’s go places. 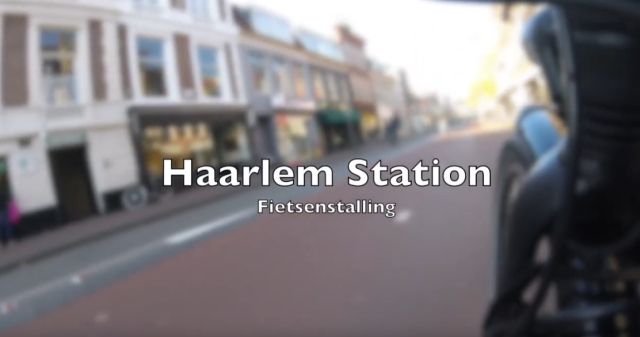 Video - a look at Haarlem Station and the bike parking underneath.

This bike parking is only a fraction of the bike parking. There is more inside the train station building and there is a multilevel bike parking at the back of the station. All of them are as full as this underground bike parking.

This is not the exception, this is the rule. Rush Hour in Amsterdam is horribly busy. It looks like this: 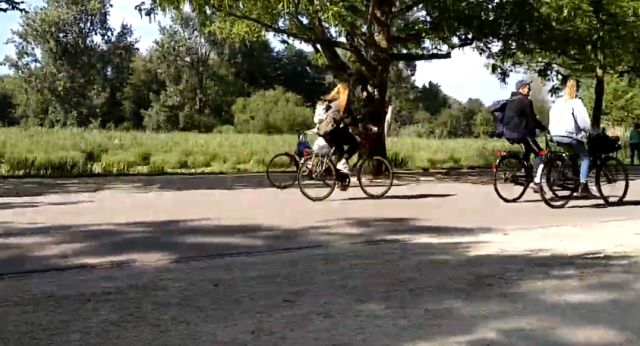 But there is no room in our city

“But, Kris! This may work where you live, with wide streets and much room and many trees, but not in our crowded and narrow city. We have no room to segregate traffic!” 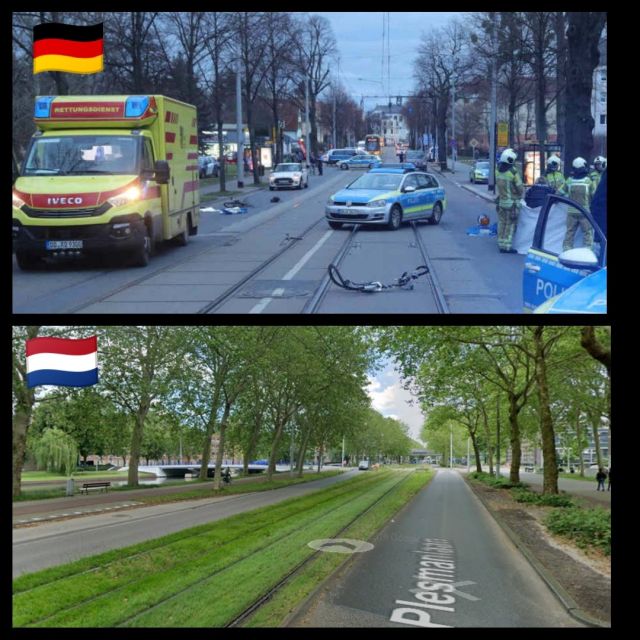 Tweet - Marco Groenewege contrasting a major city artery in Germany and the S107, a major Amsterdam artery, and of comparable size. The dutch street separates traffic types, makes impossible for cars to leave the lane and overtake, or abuse or block the tram. Area use of both constructs is comparable, one is much safer.

There is room in every city.

You get it by taking away space from cars.

Then people do no longer die.

This is the whole secret. 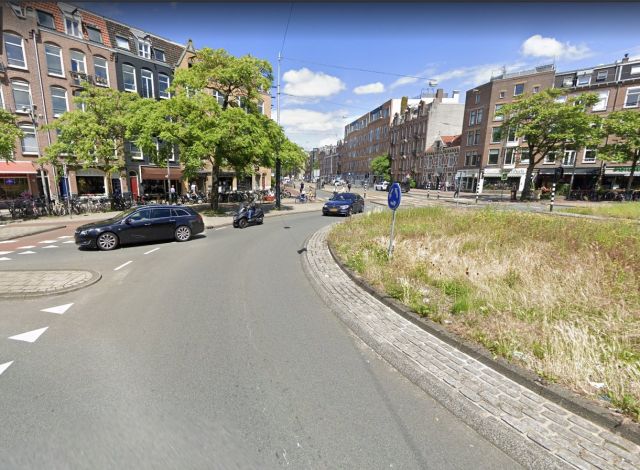 Amsterdam, Hugo De Grootplein - click for Streetview. The S105 artery crosses right to left. A roundabout is cut in two by tram tracks, and cycle traffic has to be routed through, safely. 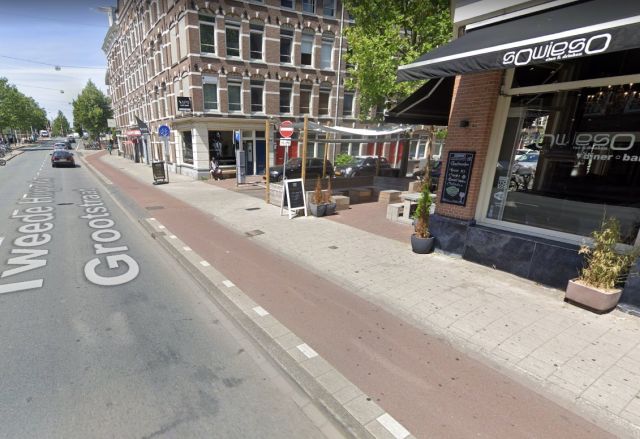 Amsterdam, on S105 - click for Streetview. The residential streets around Hugo De Grootplein are narrow. Many of them are one-way, like this one on the right (exit only). Construction of the street makes it very clear what the situation is and who has priority. 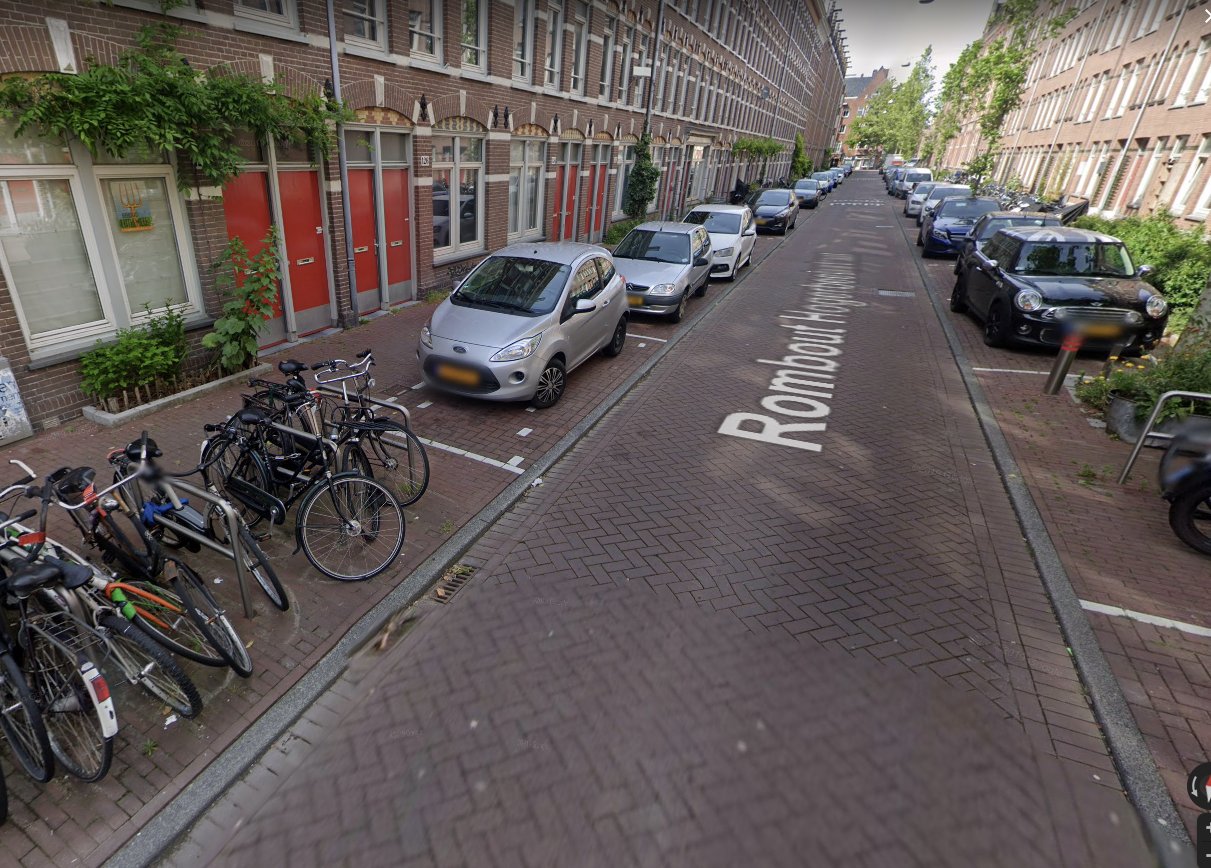 Amsterdam, inside the one-way street - click for Streetview. The pavement signals that this is a bike-priority lane, in which cars are guests. The direction of car parking indicates that this is a one way street. Parked cars clog the street.

It is also clear that the cars do not belong here. Elsewhere they have been removed . 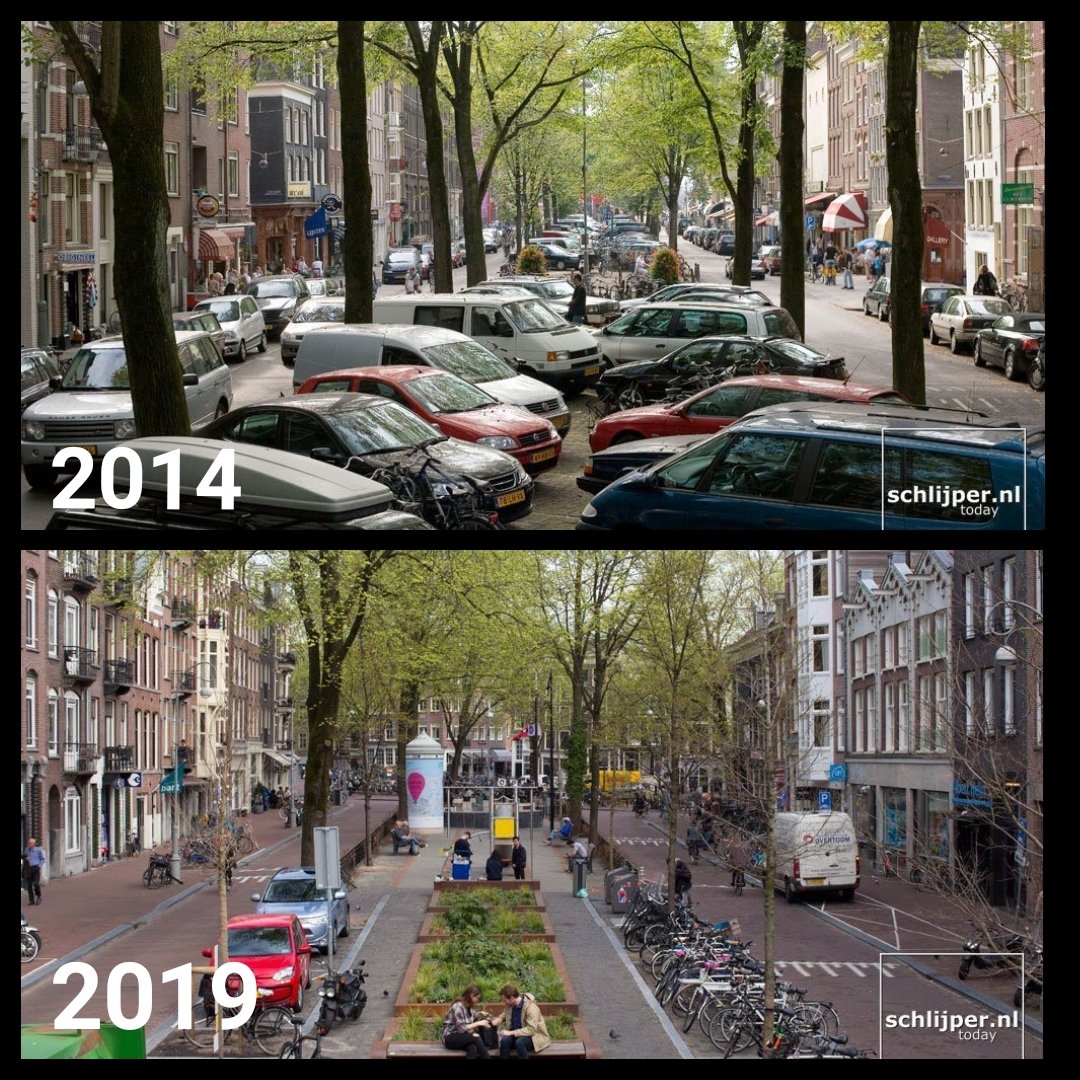 Again, we look to Thomas Schlijper’s excellent chronicles to see what happens when you remove cars from the urban environment: You get the city back. People can live.

The Bike is Part of a System

It is very important to have a second, closer look at these bike parks at Train Stations and Bus Stops. They are crucial.

I am 50+, fit, and have a Pedelec. I have few problems riding 22km from a village near Schiphol to central Amsterdam and back. It takes me around 2h to do that, one hour in each direction. The same amount of time as spent in public transport.

But the Netherlands build this AAA - All Ages and Abilities. Not everyone can do what I do. So multimodal transport is the rule. You can bike to a train station or bus stop. The design speed is 15 km/h, the design distance is 20min or less - so within 5 km radius you are supposed to be able to jump onto public transport.

At the OV point, you will find bike parking. Covered at Bus Stops, covered, guarded and often with a bike repair shop in Train Stations. You jump on the Openbaare Vervoer (OV, Public Transport) using the chipcard : All transport in the Netherlands can make their own tariff and zones, but the collection is unified with the Chipcard. That means: One ticket for the entire country, one method of billing.

At your destination, OV fiets is likely to be available - there are more than 300 stations all across the country where you can have this. This is a public transport bike that can be rented using the same train ticket.

It is not expensive at all.

The public transport in the Netherlands is purposefully designed to enable this.

And it is well tracked: Where is my OV? - live tracking for public transport in the Netherlands.

So how popular is this? 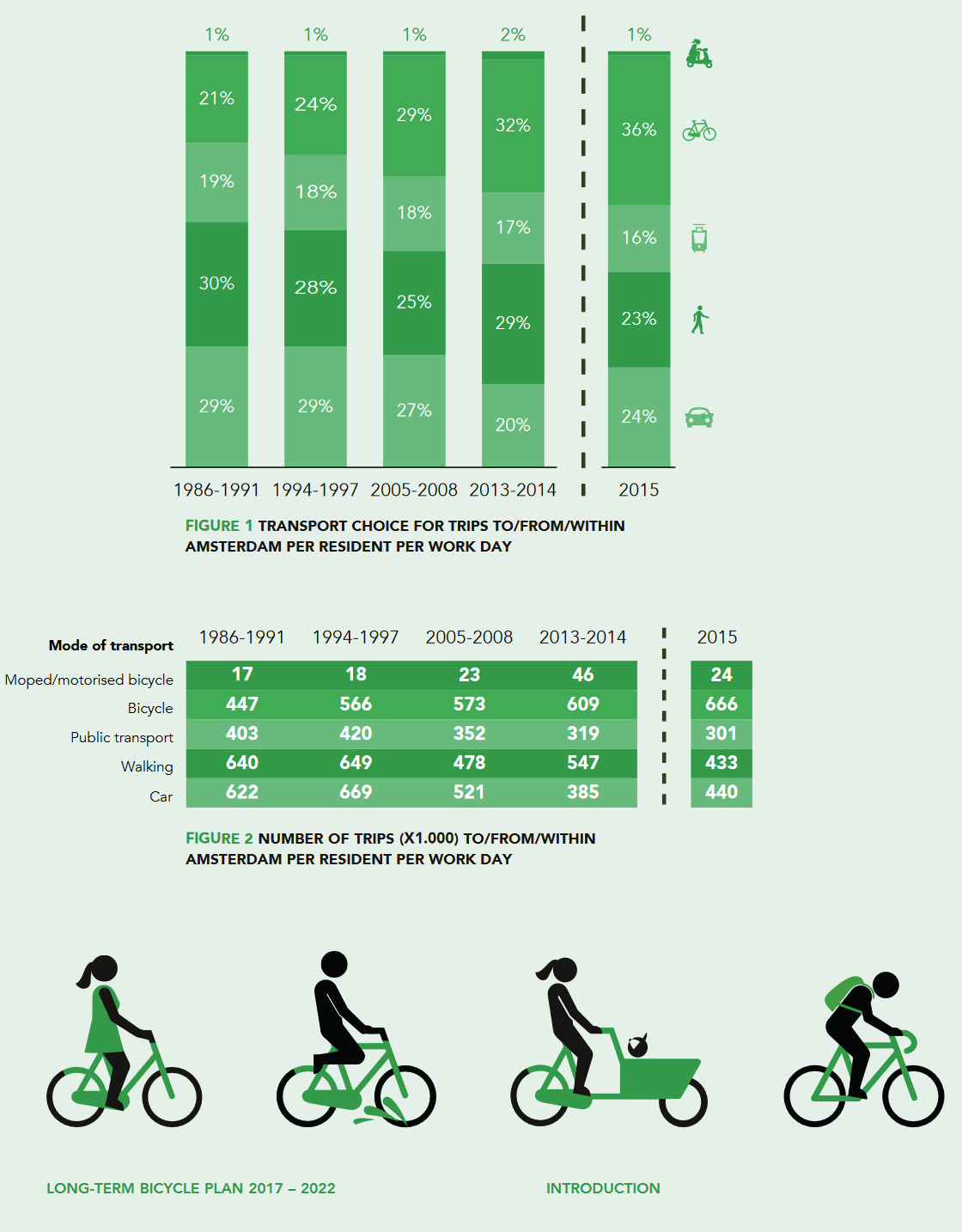 PDF of the Cycling Facts and Figures 2018. The Amsterdam City Cycling Policy has links to the Mobility Plan for 2030 and the Long Term Cycle Plan for the City. All of this illustrates

There is a pretty nifty video Invisible Bike Infrastructure of the Netherlands by “Not Just Bikes”, which explains how this came to be and how this is not an accident.

And the best thing is: This is engineering. That means, it can be reproduced, taught, adjusted and ported into your urban environment. There is CROW , which is the private engineering partner organisation for Dutch city planners. They have documentation in German, English, Dutch and other languages, they have classes and they have people that you can pay to do the work for you - depending on your cities needs and preferences.

BicycleDutch has a german video explaining how things work in the Netherlands.