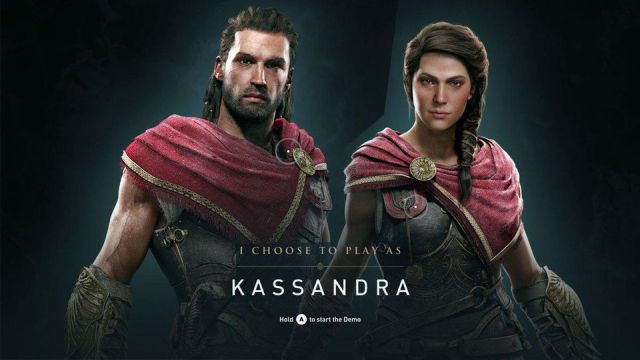 You can play “Assassins Creed: Odyssey” as Alexios or Kassandra, and the change is permanent for the playthrough for storytelling reasons. My recommendation is that you play as Kassandra, see below.

The Assassins Creed series of video games are like “Prince of Persia”, from which they descended after Ubisoft lost the license to the backstory, but with plenty of conspiracy theory added.

For those who never played: Two secret opposing forces battle throughout the history of humankind: A faction that represents order and collective control, under changing names (“Cult of Cosmus”, “Abstergo Industries”, “The Order of the Snake” and many other names), and one representing self-determination and individualism, the Assassins. The battle is usually over some magical science artifact which has been manufactured in the deep past by the creators of humankind, the Isu .

Gameplay revolves around a number of main and side quests, which can be solved by going somewhere, climbing something, and stealthily mudering everone between the character and the objective. The game is bloody, but has an option to turn off gore. With gore off and in easy mode, it is a lot like playing an dumb action movie, only around 20 times longer in runtime. There is a lot of very nicely done storytelling which allows for casual exploration of the time period depicted and the historical background.

Compared to “Origin”, “Odyssey” feels weirdly paced, and somewhat off. This is in part because of the map: 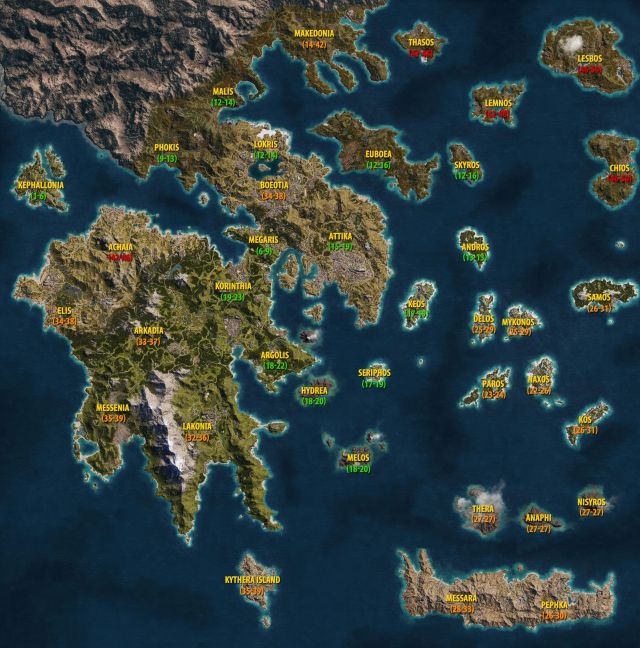 Assassins Creed maps are like dioramas in a museum, vastly shrinking the real world distances. The map in Odyssey is around 16 x 16 km in size, giving you a minified Aegean to play around in.

Because the game is set in ancient greece, the map is a part of the Aegean sea, and there are plenty of islands and sea surface. Travel between islands is by ship, and ship gameplay has a very different rhythm than island gameplay. Also, especially in the early game (on Kephalonia and in Phokis), the usual strategy of doing sidequests to always be 2-3 levels above opponents hardly seems to work, if you are used to how Origins works. Only after you learn to find timed quests and the message board, you will find XP sources. Similarly, you need to find out that “?” locations do not automatically show up on the map, and you have to explore for them to become visible.

Also, Odyssey uselessly scales up: If you are more than a few levels ahead of a region, the game will increase opponent levels “to keep up the challenge”. Fuck that, if I wanted that challenge, game, I would have been there earlier.

But anyway, once you are out of Phokis, and past the Thermopylae, things get more structure and yet, still, the game feels weird. And what is off is… the story. In a good way, though. 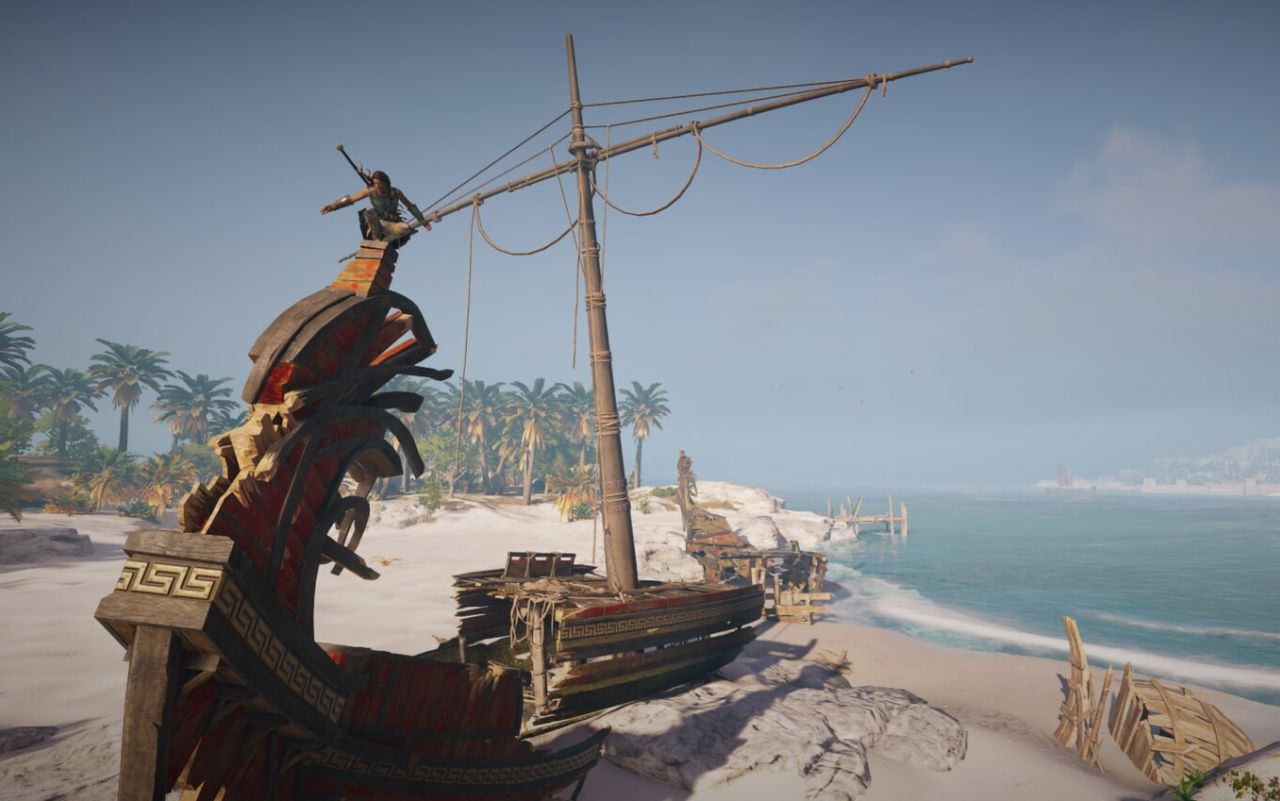 Kassandra, in her natural environment.

So how is the storytelling off? And why is this good?

The Heroes in Assassins Creed usually do not choose to be heroes, they are not Heroes in the sense of The Hero’s Journey . Their journey does not “begin in a situation of normality from which some information is received that acts as a call to head off into the unknown”, they do not choose to go off on adventure. Instead they experience loss, and then are forced to act.

Also, the other stages of the Hero’s Journey are not actually realized in the storytelling. For example, in “Origins”, Aya is not “The Woman as the Temptress” which must be resisted or is killed in order to motivate the Hero. Instead, Aya is Bayek’s partner, and in fact the actual organising force behind the funding of the Assassins Organisation.

Also, “Origins” Bayek does not fit the template of the lone hero who is fighting his way through ever more powerful obstacles until he is completely alone and unfit for civilisation. Instead, he becomes funding member and part of an organisation that tries to represent one human virtue and ideal, and not even the leader of this - Aya-Amunet is filling that role. There is no Apotheosis, no Ultimate Boon.

But there is another matching monomyth that fits better: The (VLS version of the) Heroine’s Journey , and both “Origins” and “Odyssey” match it much better than the “Hero’s Journey”. Together with the superior acting of Kassandra’s Voice Melissanti Mahut it is the reason why Odyssey is so much better when you play is as Kassandra.

In “Odyssey”, the hero(ine) is forced out of their “perfect world” through the sacrifical murder of their sibling - the “Betrayal” ultimately motivates them to go on the Quest, and this is involuntary. Along the journey, they heroine has to make friends, rebuild connections and redefine her own identity through it.

In “Odyssey” this is realized in two ways:

There are skills we aquire in game that allow us to call friends as assists in battles, and there are other game elements that fit the Heroine’s Journey much better than the Hero’s Journey. So a lot of the gameplay in “Odyssey” is not about going it alone as a lone hero, but about re-unifying the family, and about building a new group, the ships crew, by making friends along the way. Both are Heroine’s activities, not Hero’s activities according to their respectice monomyths.

While you can play “Odyssey” as a Hero’s Journey, you can also play it as the “Heroine’s Journey”, and many of its part make a lot more sense and are more fun, if you do. Also, this is quite ironic, given that you play essentially a Ninja , which according to Robin Laws is a guarantee to be boring to any RPG party, because you play alone and separate from everybody else - except that in “Odyssey”, this particular Ninja’s story is all about (re-)building groups and becoming part of something.