At work, replication chains have a single primary database node, to which you write, and then multiple replicas, in multiple AZs.

Here is what the one sample chain looks like in Orchestrator: 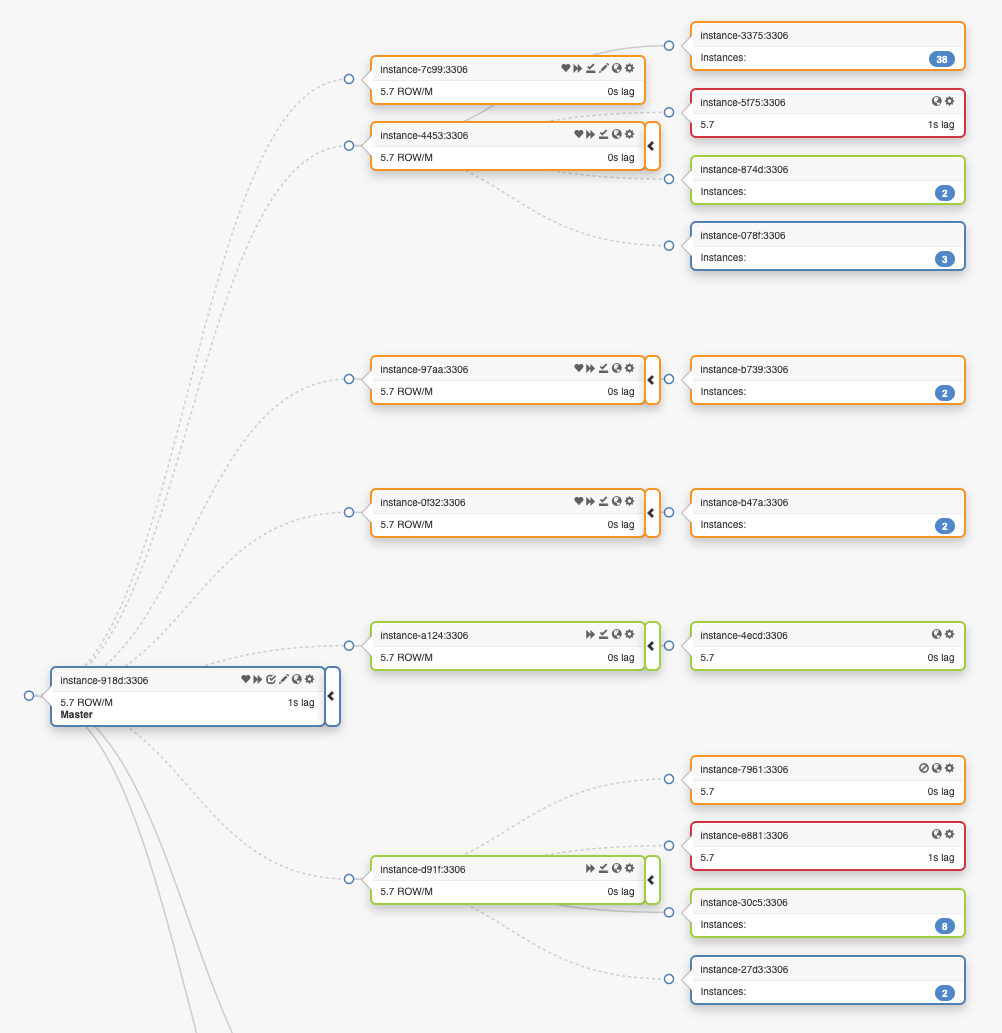 instance-918d is the current primary, in the blue AZ. Replicas in orange and green are in other AZs. Blue badges indicate multiple replicas, eg (38) means 38 machines.

When you talk to a database, you get two database handles:

The read-handle should be in the same AZ as your client application, and should be selected randomly from the available replicas for reading.

We also have other replicas, for cloning, to make more replicas, and for example time delayed replicas to correct accidental data deletions and other Oopses quickly.

Machines that are available for reading are organised in “Pools” per AZ. Many replication chains have only one Pool, “<name>-misc”, but some replication chains also have additional pools for workload isolation. For example, some chains have “<name>-slow” pools, and you get a third handle, to which you are supposed to send slow queries that cannot be optimised.

Other chains are shared between different applications, and in order to prevent crosstalk we have different pools, so that your “application-xml” queries do not mess with the regular “application-misc” queries. You are still using a “application-ro” handle, but it is non-overlapping between XML and normal application clients.

In any case, we run automated capacity tests on each pool, and then adjust pool sizes as needed. We also report to ourselves on that. Sometimes that report is interesting:

The minimum pool size is three, for redundancy reasons. The example chain is not busy, ever, and the pool size should never exceed three.

DBA Operations talk to the customer: “I am reaching out to you because you are currently designated as owners of one or more of the database schemata in the example database chain. The schemata in question are <list>.

Starting yesterday, the example chain (and, specifically, its example-misc pool) has seen a significant increase in load, mostly in the blue AZ, as shown here:” 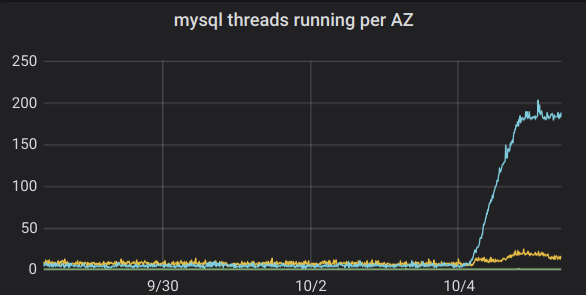 MySQL “Threads Running” going through the roof, load testing reports diminished capacity, and we ready more instances. The world is safe again! Or, is it?

So we detected an increased number of threads running, and that led to a general reduction in the capacity, and that requires MOAR MACHINES! Yay! So our bots threw more machinery to ride the load wave and that kept us afloat for the moment.

Is that the story? It is not.

Humans descend on the problem and look. What are the machines in the pool, currently? Well, if you have the privileges, you can check with our roster tool:

This box is terribly idle. For 18 hours, it was slightly less idle.

This box is terribly idle. It has 16 cores, 32 threads, it can do 32 things concurrently on a good day. Running MySQL, it usually becomes flaky at a 1m load average of 24, because we have web loads that are having very many short term variations, so “1m average of 24” really means “anything between 12 and 40”, if you look at things in 0.1s intervals.

With a target load of 24, and headroom for failover, the limit is 12 - but it will be flaky in degraded state then. We usually aim for a load of 8-10 on our boxes. For this database pool, we could do with one box instead of three in normal times, but three is the administrative lower limit for redundancy and resilience.

Nothing is busy, but we don’t have capacity

During the incident it was higher, but not much. Yet, the capacity test returned a much diminished capacity and grew the chain by a factor of more than 4. Clearly, this is not load, but something else.

Let’s look at a few metrics for the time between 04-Oct, noon and 05-Oct, 6am. We want to know if we can see more action than the CPU thing. Let’s check the network:

Nope. No action on the network. 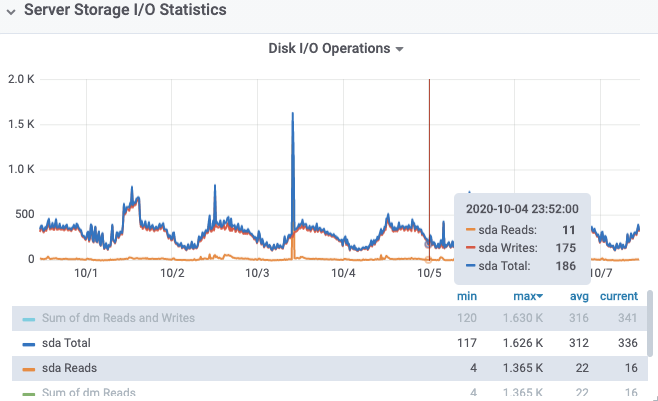 We see few writes, and almost no reads. This is a memory-saturated database.

We see very few disk writes (a few hundred writes per minute), and almost no disk reads. This is a database with the working set residing in memory, and queries are resolved without disk reads.

So whatever is happening and limiting us is a kind of CPU problem. Likely not a CPU saturation problem: We would see load > 20 for this, and we are very far from that. That means it is likely to be a per-thread CPU problem.

What could cause CPU saturation?

CPU saturation on a database can in my experience have very few and easily detectable causes:

All of these cases would create a lot more load than we see, so it is none of that.

What else stands out? 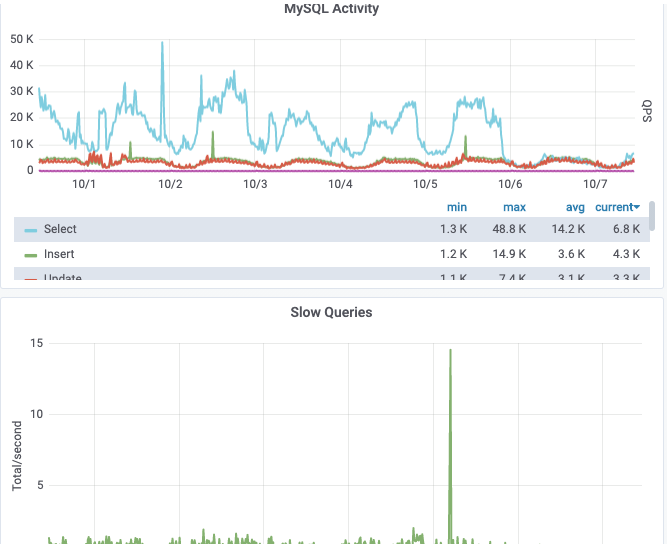 The query load did not change, the capacity did. This is getting more mysterious by the second, but I think I know the smell. See that slow query “non-spike”? We have had slow queries, but it could not have been many.

What we know by now

We have seen this before , and we have seen it a long time before that as well. Let’s check the undo-log size:

We observe a shark fin in the Undo-Log size that perfectly matches the time span of the incident and the increased CPU time.

We knew this is bad

We know from MySQL Transactions - the physical side what the Undo-Log is and what it is being used for: It’s keeping old versions of a row so that a transaction can have a stable read view preventing phantom reads.

We learned in MySQL Transactions - the logical side how the Undo-Log is consulted, depending on the transaction isolation level setting of the reading connection. Go to that article now, and read the section on “Repeatable Read and Long Running Transactions”, now.

The part where it says:

Starting a transaction at the default isolation level will force the Undo-Log Purge Thread to stop at the position of our read view. Undo-Log entries will no longer be purged, filling up and growing the Undo-Log. Reads and Index Lookups become more complicated and slower, slowing down the overall performance of the database.

So it may be long-running transactions.

How can we prove that?

And this is where metrics end, and observability starts. We would need a flight recorder that takes a snapshot of the database activities in regular intervals and keeps the data for some time so that we can look at non-numeric, non-aggregated detailed system stats from the past.

This is such an obvious pressing need that Simon Mudd wrote a script to do that in the deep, dark past long before the term “observability” even existed.

It runs every minute, and collects system hardware stats, MySQL processlist and other data, and stashes them compressed in a ring buffer in /var/log/mysql_pl/<weekday name>.

In an age of bare-metal machines and all devs having production access you log into a database, cd into that directory and grab a random snapshot from the incident interval:

With a text editor we isolate the processlist recording from 23:48 on 04-Oct. We then use Unix Tooling to look at all non-sleeping connections that are also not idle replication connections.

There are indeed two long-running queries, coinciding perfectly with a load increase of 2, and they are easily identifiable cron queries. They run from two different hosts, with the same cron banner.

I have no idea what that job does, but we are looking at a SELECT statement in REPEATABLE READ isolation that has a run time of multiple hours, and unsurprisingly an Undo-Log escalation. That leads to slow query performance and reduced capacity for all things, including the capacity test, and a changed target size for the pool.

What we can learn from this

Besides the obvious, that is, fixing that cron?

Well, there is a moment in time in incident analysis where you need to pivot from identifying timeframes in which the incident happened and machines that are affected to actual instances of the incident in question.

This is also where you move from numeric aggregates in a dashboard to textual, structured logging information that actually has to be recorded before.

This is what observability is about: The ability to do this pivot easily, within one system, without special privileges, with proper tooling, in distributed systems, at will, without access to the actual box.

We don’t have observability. We need to get better at this. Go, follow Charity Majors on Twitter .

With such tooling, we need to connect what we teach with actual incidents that show how the teachings connect to real world cases.

Which is why I am typing up this thing, right now and link to the actual write-ups that enabled me to show you this. Go, read these things again, please, in the light of this particular episode.

We have all the tooling, but it is from a different age. An age where people either routinely had access to production or sat next to a DBA in an office and could easily get at all the metrics. Observability by shell script on a root shell is a thing we have in abundance, because that was enough in that time and age.

We do no longer have access to root shells in production, and in the age of anything as a service not even to shells.

Observability as taught by Charity Majors is your trusted printf(“Checkpoint: I am here.\n”); or your Fred Fish Dbug Macros brought into the 21st century age of distributed services , and the tooling to create metrics from events, and then slice and dice that in any dimension without having a privileged shell on the broken system.