Melissa and Chris Bruntlett have been living in Vancouver close to the station, and decided to do as many daily runs as possible without a car, using public transport or bikes. In late 2015, early 2016 they did an extended visit to the Netherlands which resulted in a changed world view about what proper Urban Infrastructure can look like. Meanwhile they are living with two kids near Delft, in the Netherlands.

The book documents their experience, comparing structures in various North American cities to the Dutch learnings about traffic, density, and liveable cities at a human scale. 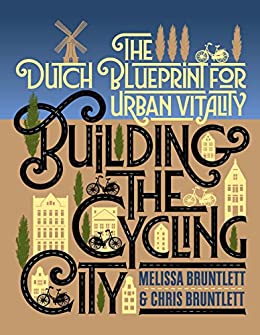 The books chapters go through various cities in the Netherlands and elsewhere to discuss why you would want to build a cycling city, how to do this, how it came to be in the Netherlands, and how solutions elsewhere have to be slightly different to accomplish their goal locally.

Interesting read, and a good complement to Streetfight , which covers the New York story on the same problem.