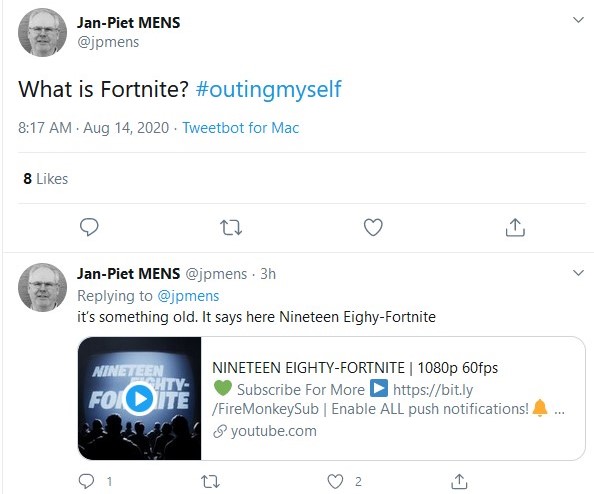 Fortnite is a game made by Epic Games. They also make the Unreal Engine, which powers many modern computer games. Fortnite together with Roblox and Minecraft it is the set of games played most by people under 20.

Fortnite is a Battle Royal game, a 1st person shooter, in which a matchmaker puts you together with a set of other people of similar skill, drops you into an arena of ever shrinking size. You got to collect ammo and weapons, build fortifications and kill the others.

Chat, Fun Gizmos and Non-Battle areas exist, and people also use it as a chat and Second Life type of tool to interact with each other (“Chat with Avatars”). Some of the Gizmos allow you to compose music, emote dances and similar joke things.

All of these games are “Free to Play” (Minecraft: You have to buy the game, Fortnite and Roblox: Download and Gameplay is free - you can buy ingame coins and buy Skins or other extras) and not “Pay to Win”. This makes them popular with the 10-20yo crowd.

All of these games have very moderate system requirements (Fortnite: Intel Iris Graphics on Mac, GTX 660 on Windows). Minecraft: Any Abacus that runs Java. This again makes them popular with the 10-20yo crowd that often uses pre-owned legacy hardware.

All of these games have heavy creative options (Minecraft: Modding to Greenland and back, Roblox is a platform for making Minigames, Fortnite has a Creative mode for Socializing and Building) and strong interaction modes.

This makes it possible for 10-20yo’s to interact with people of their age group on their own terms w/o parental supervision, during unstructured play time. This is important to them as part of their social growth process .

Sidenote: While Epic does make games, IMHO their biggest asset is Unreal Engine and the tooling that comes with it, which has bascially revolutionized game making.

Apple allows some types of businesses to sell things in-app without charging their legendary 30% premium (eg Supermarkets, Amazon and so on).

Other businesses (all things software) are banned from direct sales in Apple Apps and are required to handle payments though App Store.

Apple then takes their 30% cut.

That is what Epic wanted . They are now taking this to court and are also making fun of Apple for doing this in a big way, typical for Epic and Tim Sweeney.

Epic Games is not exactly an underdog, even if they position themselves as this in this corporate conflict - they are valued a 17.3 bn USD company, 50% held by Sweeney. But it takes an underdog this size to have a chance to take a bite of out Apple’s Lawyers.

Them winning this is an important step in cracking the App Store monopoly and turning Apple into a better platform. Other companies have taken notice and positioned themselves. Notably all of Match Group , the owner and maker of Tinder, have sided themselves with Epic in this case.

It is noteworthy that Epic also has the same conflict going on with Google - they did exactly the same thing on the Google Play store, were also delisted yesterday, and are also suing Google just as they are suing Apple . This is interesting, because OnePlus and LG have been in talks with Epic about preloading Fortnite on the Phone (Ugh, ultimate bloatware!), which is now impossible, because Google prevents this from happening.