When writing data to disk, for small transactions the cost of writing the commit out do disk dominates the execution time of the script. In order to show that, I wrote a little bit of Python.

There is a small driver script to run the test. The driver creates the table, truncates it and will then run the fill command of the script over and over again, with growing commit-sizes. All powers of 2 from 0 to 10 are being tried with 10.000 rows of test data.

The test system has a very old SSD (Crucial M4-CT512M4SSD2) as a data directory. 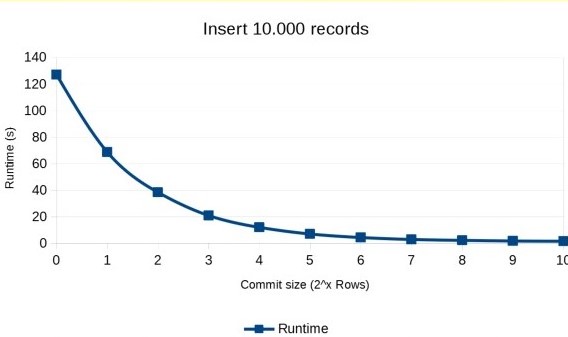 We observe: Going from single row commits to 16 row commits, we get a 10-fold speed increase, and going to 1024 row commits, we are seeing another factor of 10. After that, there is hardly any improvement for our chosen record size and hardware.

A transaction size of 1000 rows or larger does not seem to improve write speed (ie in a data load).

MySQL Transactions - the physical side