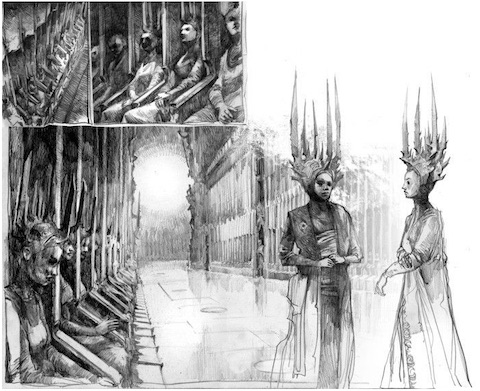 Where part 1 spent a lot of time with world building and tourism, showing of the wonder and the atmosphere of the universe, part 2 is approaching from a different angle - we get a lot more action, and a lot less background.

We are still with Iniza and Glanis, who are now living on the pirate-planet Noa and raising a daughter. Or are trying to, because the galactic poltics with its intrigues, treason and assassination are coming to Noa, too. And the mysterious history of their world, some machnines that survived this universes Butlerian Jihad, are already there, hidden and deactivated waiting for action.

Second parts of trilogies are always hard and often lacking. This one is good, but the change of pace and the slow development of the backstory are making this a weaker book than the first part.

The third and (so far) final part of the series leaves us with the muses, the ambassadors of the machine empire, awakened on Noa and other world, Iniza and friends fleeing, and the Hexen having to fight an entirely different enemy than expected, because amist the Hexen Empire the machines are rising again. We get some amount of closure, information about the god empress and her world Tiamande, the machine lord and the machines, but a lot of background is unresolved and remains mysterious.

All in all a nice, but dark and depressing read, and a lot of unresolved things.