In the foreword to his short story “With Friends Like These” , Alan Dean Foster writes

My favorite writer of science fiction was, and still is, the inimitable Eric Frank Russell. When I was turning in short stories to the magazines instead of papers to my college professors and collecting rejection slips instead of credits and grades, I often wondered why Russell had stopped writing. I miss him.

At the 1968 World Science-Fiction Convention in Oakland, John Campbell told me that Russell was his favorite writer, and that he too sorely bemoaned the lack of yarns Russellian. So I decided to try a Russell-flavored Terra-über-alles story. Campbell liked it. He never sent acceptance letters—just checks.

Sure enough, the story is Terra-über-alles: Aliens come to Earth, which has been sealed off in an impenetrable force-field in a kind of last stand eons ago by some Alien race that feared Terra would take over the Galaxy. The aliens that did that died off, and their successors come to Earth to set Terra free because they are in a fight to death with some kind of sentient-eater swarm horde and need all the allies they can get.

They find a planet that looks like a pastoral paradise, and fear that humanity would be nothing but cannon fodder. But they do come to an agreement with some random farmer who claims to be able to speak for all of Terra: The aliens would set Terra free and Terra would help in the war. Sure enough, once the planetary shield is down,

In the middle of the planet’s second ocean, great, impossible masses of thick columnar crystals began to leap upward from the waters. Translucent at first, the chalcedony towers began to pulse with deep inner fires: blue, purple, gold, carmine, and finally a strange, yet familiar silver-gray. The ionosphere, tickled, began to surround the flashing needles with auroras, clothing them in blankets of coruscating radiance.

Following, the planet began to move after the [Cruiser] Tpin.

On board the cruiser it was very quiet.

“I see,” whispered Rappan idly, “that they are bringing their moon along also.” 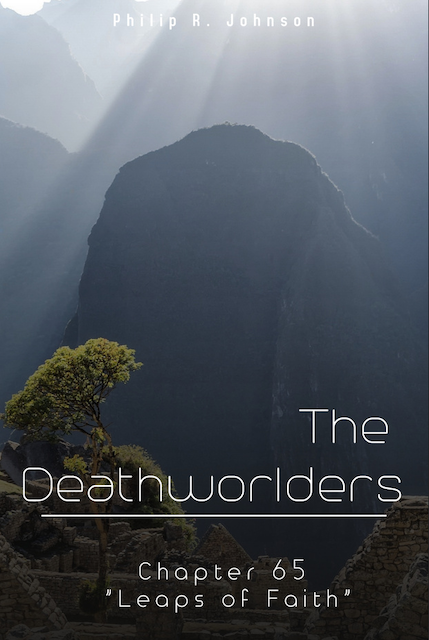 As a genre, Terra-über-alles is alive and kicking in Reddit’s /r/HFY (“Humanity, Fuck Yeah!”), which collects writing prompts and publications from many people interested into this kind of story. One of the more popular serial publications in there is The Deathworlders by Philip R. Johnson, now the foundation of a whole system of stories playing in the so called Jenkinsverse. The HFY Wiki gives a good introduction.

The basic premise is that in the Interspecies Dominion it is well known that intelligent cannot develop on Deathworlds , worlds with a danger rating of 10 or more on the Dominion scale. Except that somehow on Earth, which has a rating of 12, it did.

And didn’t: Humans have been abducted from Earth by the Corti (basically the typical “Grey”) and some ended up roaming around the Dominion as part of the Fauna, because Humanity still has not developed an Interstellar Drive and hence under Dominion law does not qualify as sentient.

Deathworlders started off in 2014 with abductee Kevin Jenkins on some random Dominion station, going through immigration. He has the usual problem of not being legally a sentient being, and while talking his way past the Immigration Officer the station is ambushed by Hunters - sentient eaters. Jenkins deploys his deathworlder heritage and is apparently not only mostly impervious to the Hunters’ Kinetic Pulse Weapons, but with his superior density, his high-grav world musculature and fast reflexes is able to singlehandedly smash the attackers, saving the station. Which puts Humanity onto the interstellar political playing field.

Originally a short story, Johnson has managed to turn this implausible premise into a believable backstory, in which the Dominion races have been manipulated and genetically engineered as malleable and relatively physically weak by some hidden force older than time itself. The story unfolds with an ensemble cast of characters human and alien, some of which have been integrated from popular sidestories other authors of /r/HFY have contributed. It follows their development and interactions, while at the same time the story arc of this hidden enemy and its machinations is being uncovered.

The writing is actually good, and in many cases right in the feels with relateable personalities. The character writing is often heavy on the bro-culture side, though, even if Johnson manages to stay firmly on the healthy and non-toxic side of this particular subculture. Similarly, the author dances with the genre of Military Scifi without actually descending into lengthy descriptions of space battle tactics or paragraphs of gun prose - he is not always successful in this when it comes to descriptions of strength training and personal improvement, and somewhere in the Warhorse chapters this can become a bit tiring. Arc and plot development are actually going quite well, and the story manages to portrait intelligent and evolving adversaries that actually pose a threat. All in all I have been coming out of this with the feeling of time well spent.

Over time, the core series “The Deathworlders” has grown into a tome of (at this time) 65 almost book-sized chapters. Side series from other authros complement it.

The core story is written in monthly installments, and is available for free on https://deathworlders.com/ . The author maintains a Patreon as Hambone and bills by (almost book-length) chapter.