Fashion and Its Social Agendas: Class, Gender, and Identity in Clothing by Diane Crane is an analysis of the changes in society during the various phases of the industrial revolution through the lens of clothing in various societal strata. 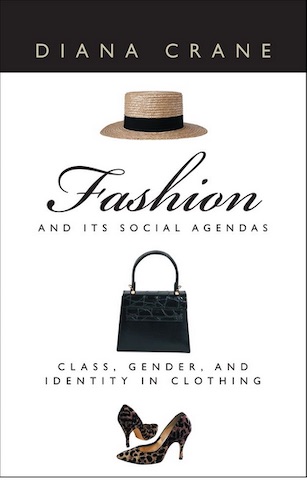 The book studies fashion and clothing choices in three countries - France, the United States, and England - over a period of 150 years. France and England are examples of class societies in the nineteenth century. It has available four sets of data: Interviews and inventories of clothing in a large number of households the above countries, spaced out over an extended period of time. The long timescale and the temporal distance between the various studies allow comparison across major events (such as the Franco-Prussian war) and as industrialisation plays out.

This is not a book for reading, it is a study, full of footnotes, tables, cross references and sections that demand note-taking. It is also interesting, because it shows how materials, production cost, societal change and changing gender roles change the role of fashion and how it is being used in society. Hard work, bit damn interesting.