The Wiz Biz by Rick Cook is a book in the genre of ‘magical realism’. Some real-world person is being transported into a universe with predictable magic in a classical fantasy setting and is applying scientic method and industrial production methods to the setting. 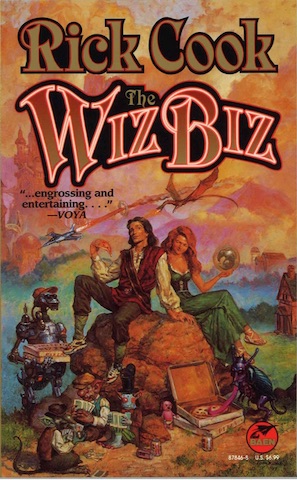 In this book, the real-world person is Walter Zumwalt, a stereotypical hacker, which as part of a hail-mary summoning rital is being transported into a magical war between the good guys and the bad guys. Walter does not know a thing about magic at all, but apparently that can be learned and then turns out to be a lot like computer programming, if you make it so.

This book is over 20 years old, and it shows. Not so much in the computer programming aspects, but in the story telling, the world views, and the usage of cliches, most of which did not age well at all. The coding aspect is being introduced late to the story, and is not well constructed. The storytelling is flat and the characters are, well, cliche.

All in all a nice idea, but meh execution.