I fell into the Twitters again. @CarrickDB joked about Unix, Files and Directories: 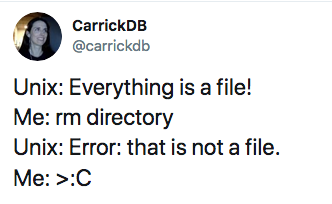 And that is a case of “Haha, only serious”. Because directories used to be files, and that was a bad time. Check out the V7 Unix mkdir command. At this point in history we do not have a mkdir(2) syscall, yet, so we need to construct the entire directory in multiple steps.

This fragile and broken: mkdir could be interrupted while doing that or another program could try to race mkdir while it is doing that. In both cases we get directories that are invalid and dangerous to traverse, because they break crucial assumptions users make about directories.

This is also before readdir(2) and friends, so programs like ls open directories like files and then make assumptions about the format of dentries on disk. Specifically, they assume a 16 bit inode number and then a filename of 14 characters or less and a directory that is an array of these entries. Unfortunately, time has not been kind to the assumption of 65535 files or less per partition, and also we require filenames that are longer than 14 bytes these days.

Finally have a look at the hot mess that the rmdir command is. What could probably go wrong?

Well, Jan Kraetzschmar reminds us that this kind of non-atomic rmdir can also produce structures in the filesystem that are disconnected from the main tree starting at /. In that case you end up with orphaned, unreachable inodes that still have a non-zero link count. fsck should be able to find them and free them, but of course that would be a disruptive operation. Making mkdir and rmdir system call avoids all of these problems.

That’s why all of this was fixed in 1984 or so, when BSD FFS came around and we got long filenames, wider inodes, mkdir, rmdir and readdir as syscalls and many other improvements.

What if really everything was a file?

Another decade later, around 1995 or so, we got Plan 9, not from outer space, but from Bell Labs.

It not only brought us Unicode everywhere, but also an exploration of ‘What if really everything was a file?’, including other machines on the network and processes on our machine. From that we get todays procfs in Linux (and in many other modern Unices).

Except that you can’t rm -rf /proc/1 to shut down the box.

Things that still are not a file, and should be dead

I am not going to mention System V IPC here at all. Not shm, not sem, and not msq. They are abominations that should never have escaped the lab cages they have been conceived in.

There is mmap, and mmap is good. Or can be, as long as you do not conflate in memory and on disk representations of data, and understand the value of MVCC. But that is another story and should be told another day.