Let’s have a look.

It’s 2019. End user devices are using Wi-Fi, and are running on Batteries. They are Cellphones, Tablets or Laptops.

Devices that are not connected to grid are more usable if they are trying to save energy, and so all modern devices are full of special purpose hardware that allows them to fulfill their main functions more energy efficient. In particular for the use-case of watching video modern hardware, even cellphones, have special ASICs that can do video and audio decompression and compression on the fly faster and with much less energy usage than a CPU could do.

Also, devices without a fan are limited to a sustained power usage of 5W or less, because that is typically the heat that a device can dissipate without a fan and without looking strange.

All of this is an enormous improvement: An old-style desktop computer has a TDP (Thermal Design Power) of 150W and actually uses a large two digit number of Watts to run, and an old-school 17" monitor instead of a modern LCD uses as much energy. A modern tablet or cellphone does both, loading an email and displaying it, within a power budget of 1.5W to 5.0W, so easily 20-40x more energy efficient.

»“A smaller resolution saves data and power. A smartphone for example cannot show HD resolution”. Also, the larger the screen, the more power use. In total: Watching HD movies on a smartphone is the most energy intense and most climate endangering use.«

That’s an amazing mix of truth and nonsense:

Google specifically is using 100% renewable energy for their data centers, since 2017 , for a total of 2600 Megawatt. They are doing this by financing solar and wind facilities directly, and not through greenwashing certificates (PDF ).

Azure claims to have reached CO2 neutrality in 2014, and also talks about Power Usage Effectiveness (We’ll be touching that subject in more depth below). In their Dutch page they claim

“We have reached CO2 neutrality in 2014 and reached our targets for power usage effectiveness of 1.125 for all new data centers. With this, we are 30% better than industry average.”

Amazons energy page is AWS & Sustainability and they claim more than 50% power from renewables, and commit to a 100% renewable goal for their global infrastructure.

Like all the other cloud providers, they also highlight the way lower PUE and much higher utilitzation of their servers compared to on-premises IT (65% vs. 15% average utilization, and 29% better power effectiveness, adding up to a 84% better overall power bilancing in their math).

They also list their ongoing solar and wind farm builds. For the amount of power usage they can’t yet cover from direct renewable sources, the page states ‘AWS purchases and retires environmental attributes, like Renewable Energy Credits and Guarantees of Origin, to cover the non-renewable energy we use in these regions’, making them overall CO2 neutral.

Finally, computer power usage is not linear: Power management on a data center CPU turns cores on and off as needed, and thus, a CPU uses already circa 50% power at 10% utilisation. From a cost and from an environmental perspective it is best to utilise any CPU to the fullest. Some older measurements of mine on this.

The article from Deutsche Welle states correctly that the Last Mile is what counts. That is, because everything before the Last Mile is already fiber, and fiber lines allow extremely fast networking at relatively low energy.

Germany, specifically, is wasting a lot of energy on the last mile, because in order to make Germanys aging copper infrastructure capable of handling modern data rates, a stunning amount of signal processing is required. 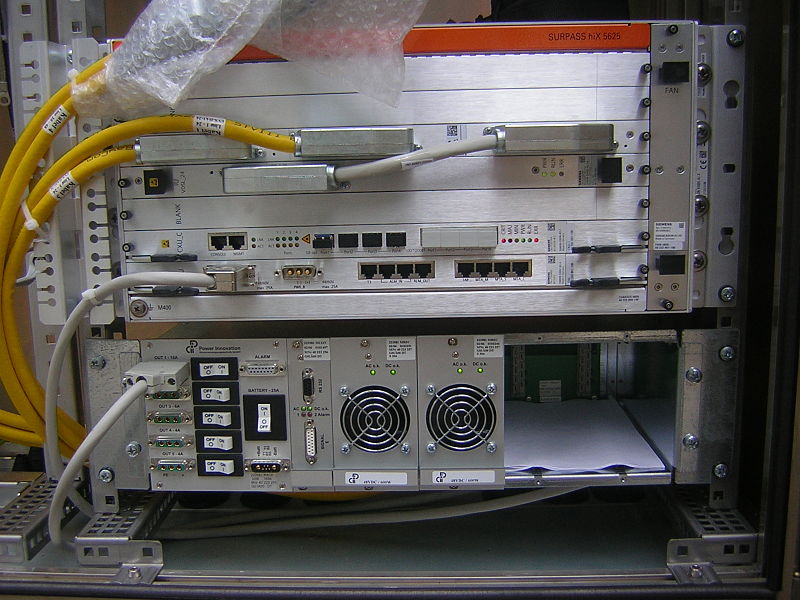 Siemens DSL DSLAM (not VDSL) as can be found in typical outdoor cabinets all over the city. VDSL requires even more compute to send Megabits/s over what is hardly better than a wet cow wire (Image via Wikipedia )

Copper infrastructure maintenance is typically the most costly of all network types. By comparison, GPON is significantly cheaper — upwards of 45% less to operate than VDSL2.

That’s why replacing aging copper plant with fiber has significant operational benefits. New fiber is more reliable than old copper while, at the same time, consumes much less energy. Also, with GPON operational costs are further reduced with the elimination of the digital subscriber line access multiplexer (DSLAM) from the access architecture.

Clearfield specifices the total installable power in their typical grey ‘outdoor VDSL cabinets’ as up to 3000W, but most cabinets will not be fully powered to the max. German Telekom DSLAMs are being fed 48V/25A, around 1000W for the street level devices with four cards.

Moving this to fiber will dramatically save energy, and in fact, everywhere in the world outside of Germany this is happening right now.

Mobile data networks are indeed great power sinks . If you can use cabled networking, do so.

John Laban is an ambassador for the Open Compute Project . Funded originally by Facebook, OCP is a project that tries to build more power efficient cloud data centers. In his presentations , John explains how OCP achieves this by getting rid of old technology in the data center and making the room and the rack a system: 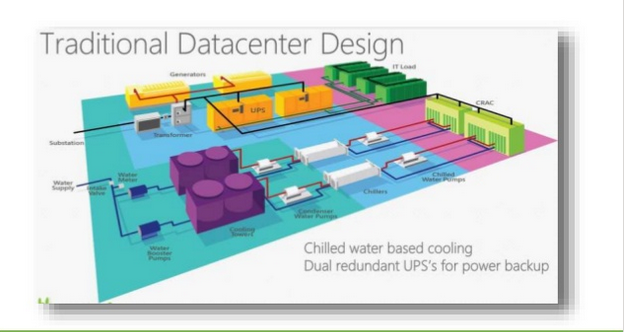 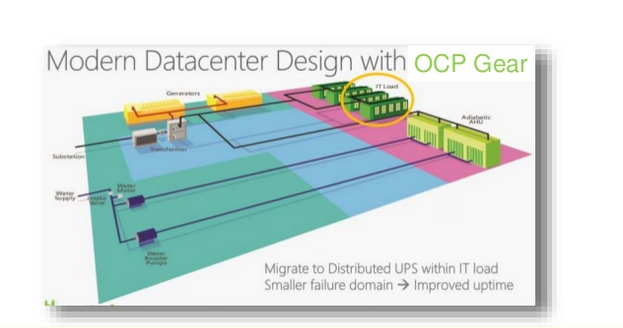 OCP Data Centers: Dark Green - Payload. Still around: Generator, Airco is now adiabatic instead of CRAC. Everything else: gone.

Traditionally data centers have a raised floor, which transports cold air to the racks, goes through the racks and is then cooled again. Air-in temperatures are often as low as 17-25C, and humidity is tightly controlled. OCP data centers allow non-condensing air of up to 35-45C to go into the servers, which does basically away with heat pumps and air condition and allows ambient temperature air to go into the DC.

Traditional servers have often a relatively low height (“1U”, one rack unit), which forces the designers to use relatively small fans, small heat sinks (== higher air flow speed necessary for cooling) and produces a lot of friction for the air in the devices. In a 350W server, the worst case I have personally observed is 50W for air movement.

OCP uses higher rack units (“OU”, Open Compute Units) and usually makes devices no flatter than 2 OU. Instead, horizontal partitions are used (3 devices in 2 OU) for a more square device front, minimising friction and allowing larger heat sinks. It also allows larger fans, with in turn allows moving the same volume of air with less RPM and a lot less power. Best cases I have personally observed were as low as 5-10W for a 350W server. 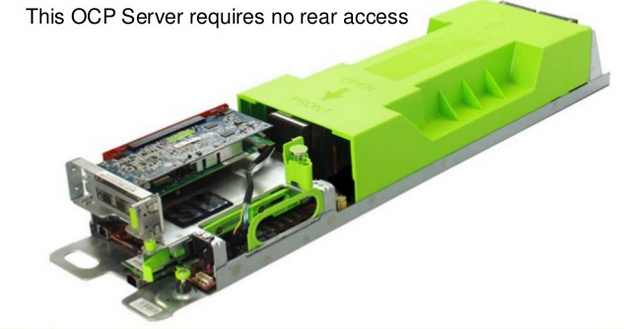 Total OCP power savings vary by use-case and climate zone, but are usually 20-50%. South Korean Telekom tested OCP servers in a climate chamber with various settings (Testbed , Findings ) and what really shows is how the OCP power consumption stays the same at all possible air-in temperatures while legacy equipment consumes a lot more power because it has to turn up the fans.

The Power Usage Efficiency, PUE, is the ratio of total power consumption of a data center compared to power intake of the compute equipment. The overhead typically contains cooling, air movement, and power transformation losses.

The data center built by web.de in Amalienbadstraße, Durlach (Karlsruhe), had a PUE of 2.0 - for each Megawatt used for compute, another Megawatt was required for cooling and air movement. The reasons for that are manifold: The building itself, an old factory building built by Pfaff, had low ceilings forcing warm air back into the machines and forcing bad airflows. The hardware used had a lot of loss due to badly designed airflows. And the location of the data center, down in the valley of the river rhine instead of high up in the Black Forest, combined high ambient air temperatures with high air humidity, making evaporative or adiabatic cooling an inefficient option - compressive cooling with heat pumps was necessary.

More modern data traditional centers can achieve a design PUE as low as 1.2 and an effective operational PUE of 1.6. Rigidly optimized OCP data centers can go below 1.1 effective PUE (sic!) in good conditions. Google published their numbers in their PUE dashboard .

All current cloud vendors deploy OCP equipment or (in the case of Microsoft) self-developed equipment that is comparable in efficiency. They also add additional special purpose hardware to their cloud offerings that allows offloading of common functionality from the sellable cores of their machines, in order to maximise sellable inventory, save power and, of course, increase utilisation.

All aspects of improved efficiency and utilisation included, cloud hardware often is 3x (or more) efficient than a traditional data center.

EDIT: A longer article by Jessie Frazelle on Data Center Energy use: Power to the People .

EDIT: I have been sent a link to a writeup on data center planning considerations . While this was part of a SEO effort, the source (Schneider Electric) is competent - Scheider specializes in Data Center Design and Planning and Energy Systems - and the writeup is actually useful. The text gives a bit of insight into the process and the factors that go into site planning and choices. A lot depends on intended purpose, local climate, available space and power and ultimately also site size and building increments.

Compared to technology from 10 years ago, in the data center we are now using a lot less energy and with cloud technology also have dramatically improved utilisation (ie use less hardware to achieve the same outcome). Also, all of this is green energy, mostly from actual green production and not grey-green with certificates. Cloud operators are some of the largest investors in Wind and Solar all over the world.

At home, savings are even larger, because we went from Desktop machines with abysmal power profiles to modern low power hardware which uses single digit wattages to produce results.