So I have been playing this Internet Spaceships Game. No, the other one . It also has NPC Backstory, and on 13-Sep-3305 , a multiplanetary food crisis was predicted, as a prep for the introduction of a new tradeable good on 18-Sep-3005 .

Distribution of the fertiliser has started at Marshall Dock in the Riedquat system. We encourage traders to take advantage of our introductory prices.”

So some people flew to Marshall Dock and looked at the prices for Rockforth Fertilizer . What they found was a single station buying and selling the good at the same time, and buying it at about 9000 CR higher than they sold it.

So here is what we have:

Of course, that news made the rounds rather quickly, and soon a lot of people were docking large freighters at Marshall and bought and sold fertilizer as quickly as the game GUI would fill and empty their cargo bays. That is easily several million CR every five seconds, and I know of some people who ran this for 11 billion CR (11e09 CR).

That is what Frontier did to “fix”.

Frontier Developments became aware of the misconfigured station only after several hours, and the sale was available for the larger part of a day, from around shortly before noon CEST to shortly before 7pm in the evening of the same day, when they fixed the trade tables.

I do not know if Fdev have in-game trade dashboards that alert them to abnormally fast or high volume transaction volumes or cash flows. Or to abnormally quickly growing player budgets. But the slowness of detection lets me suspect that their in-game monitoring maybe has potential for improvement.

As a result of the situation, Fdev decided to correct CR volumes on a number of accounts on the grounds of players ‘abusing game mechanics’. Well, playing the game is literally this, so that’s weird, but they what they decided to do is to book back the CR earned, and/or also delete any goods purchased with the CR earned (mostly, ships). 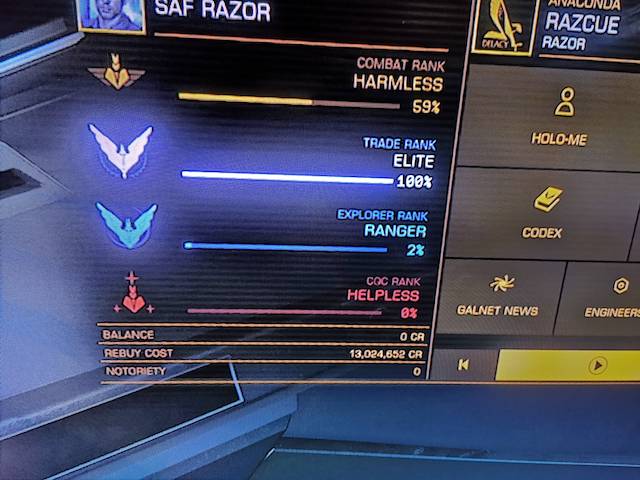 An Alternative Account of a player, after the deduction. Went from 51m CR to 1.3b CR, then purchased an Anaconda. After the correction 0CR, in an Anaconda, and with Elite Trade Rank plus Arx earned.

Now, that’s not how any of this works.

In terms of game mechanics, what happened is a trade. A trade does much more than earn you money.

Fdev deciced to “fix” the situation by taking away money earned in the Trade, but due to whatever reasons mis-calculated the values of the earnings, in some cases by several hundred million CR. They also took away goods purchased with this money (deleted ships, mostly).

They did not revise any wing trade dividends.

They did not revise any rank gained.

They did not revise any Arx earned.

They did not take crew member mechanics into account.

EDIT: The miscalculation is probably because FDev based the money deducted on trade value, not taking into account Crew Member mechanics.

So this entire thing reeks of unprofessional execution, “as if an intern ran the entire thing from setting up the tradeable to misconfiguring the station to mishandling the aftermath”. It hints at badly executed ad-hoc non-process, and generally bad policy at handling in-game incidents - whoever did this did not just set it up wrongly, but also did not understand the consequences of the proceedings when trying to mop up the aftermath. And the math was wrong.

Elite (1984) was one of the first games that had savegames, and progression, and since then the game has always been about ‘state’ and moving forward. The incident handling here basically mishandled game state at a large scale, at every stage of the entire proceedings.

The Other Internet Spaceships Game has the Council of Stellar Management . The story of its inception is rather famous and a much larger incident than here, but the logic behind it is similar: The company has been handling an in-game incident badly, and a structure needed to be put into place that can evaluate, judge and define process properly to handle situations like these.

E:D has no such structure, and it seems that this might need to be addressed somehow, too.

EDIT: Chris_W noted that there is also crew member mechanics. This post has been amended to reflect this.