The young and incredibly pretty (except for the scars that document her suffering in the salt mines) Mary Sue was about eight when she was found half frozen at the shore of a winterly river by the King of Assassins, who took her in and forged her into the deadliest of his assassins through harsh and cruel training. Too bad that, eighteen years old, she was caught, punished and was sent to the salt mines of Endovier, by the king who conquered her homeland and slaughtered her parents. 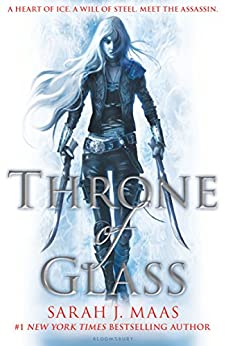 Nonetheless she is easily convinced to be freed from the salt mines and work for the cruel king as his champion and master assassin, provided that she wins a pointless competition between a bunch of shady characters and her in the palace, a glass castle sitting atop an older castle in the city of Rifthold. She wins, makes friend with another woman from another conquered country and also meets mysterious ghosts from the mythological past, finds secrets passages and learns mysterious magical runes that work despite the fact that magic in her world stopped working ten years ago.

It gets better after than, but the Mary Sue’ing intensifies - we learn that Mary is not only a master assassin, but also a half-fae, has magical powers that control fire and is the heir of a kingdom in the north, who after the assassination of her parents was left to die on a frozen riverbank, where.. see above.

Mary Sue learns the runes that allow her interdimensional travel, and that she is destined to fight the interdimensional demon lords, the Valg, that invaded her world a thousand years ago. So she and her friends (the mightiest fae warrior of all time, her half-fae cousin and a shapeshifter) are doing that…

Interesting world building, really bad character motivation, slightly better development. YA stuff, starts like a cheap romance novel. Heavy Mary Sue’ing. Read for the tourism and the worldbuilding, the literary equivalent of Currywurst (it’s not healthy, but sometimes you have cravings).