Reflex, Impulse and Exo are the continuation of Jumper . Jumper was dealing with a young man, living with an alcohol dependent father and dealing with abuse. The young man leaves, builds a new existence and in this conflicts with secret services and terrorists. In the course of the story he makes peace with his father and his past, manages to build a meaningful relationship and build a stable life and income. 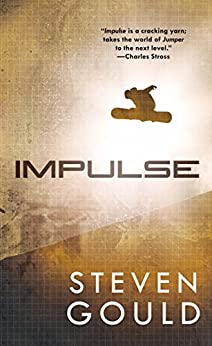 The fact that he is a teleporter is a nice addon to the main character development. Turns out the book is much better than the film.

In Reflex, David is abducted by an evil syndicate, trying to condition him (hence the title) and chain him in a way so that he can perform jobs for the syndicate, while his family deals with his vanishing. His wife Millie develops teleportation capabilities too, establishing that his capabilities are “infectious”. It is also established that by very quickly jumping back and forth between two places he can open a kind of gate between two places, channeling water, air or other substances across a pressure differential. The story deals with Millie coping with her newly gained abilities, and David coping with the continued abuse and trying to resist the conditioning and corruption from his abusers.

In Impulse, the story arc is continued, but the focus switches to David and Millies daughter Cent (also Millicent, like her mother). Cent is also infected with teleportation abilities and uses her natural sciences education and experimentation to establish that she cannot just teleport, but also add Impule (v0, speed) to herself when jumping to a target location, which may be identical to her starting location. In short, she is able to shoot herself through space and up into the air. Which comes in handy when the big bad from Reflex tries to capture her.

Finally, in Exo, Cent uses her Impulse-generation abilities and her fathers money to get spacesuit and shoot herself into space. In the turn of the story she not only manages to save an astronauts life on the international space station, but also builds herself her own space station, scares the US space command and the Iridium operators.

This concludes the Dave/Millie/Cent story arc.

Gould is a school teacher and these are YA novels, so there is a lot of science background. The characters are well written and believable, they have an interesting development during the story. This is a fun read, and if you have seen the film (which is awful) you should try the books anyway. They are much better.

There is another story in Gould’s Jumper universe, Griffin, which is unrelated to the David/Millie/Cent arc. Griffin is a child who can jump. His parents understand that people exist who can sense jumpers and who kill them and try to protect him - but when Griffin jumps without care, they get killed and Griffin has to learn to survive alone. He does, makes friends, but the killers find him and his friends again and again, and he continues to lose everybody he loves, until he turns around and starts to hunt his hunters.

There also is a Youtube Premium Series named Impulse, which is based in Gould’s universe, but has different content and characters.