beep is a program that is part of Debian (and Ubuntu) to have the PC speaker multiple times, at different frequencies, with different pauses and beep lengths. That works just fine. It’s also SUID root. There is zero code in it that deals with the fact that it may run privileged.

Some users will encounter a situation where beep dies with a complaint from ioctl(). The reason for this, as Peter Tirsek was nice enough to point out to me, stems from how the kernel handles beep’s attempt to poke at (for non-programmers: ioctl is a sort of catch-all function that lets you poke at things that have no other predefined poking-at mechanism) the tty, which is how it beeps. The short story is, the kernel checks that either:

What this means is that root can always make beep work (to the best of my knowledge!), and that any local user can make beep work, BUT a non-root remote user cannot use beep in it’s natural state.

What’s worse, an xterm, or other x-session counts, as far as the kernel is concerned, as ‘remote’, so beep won’t work from a non-privileged xterm either. I had originally chalked this up to a bug, but there’s actually nothing I can do about it, and it really is a Good Thing that the kernel does things this way.

There is also a solution. By default beep is not installed with the suid bit set, because that would just be zany. On the other hand, if you do make it suid root, all your problems with beep bailing on ioctl calls will magically vanish, which is pleasant, and the only reason not to is that any suid program is a potential security hole.

Conveniently, beep is very short, so auditing it is pretty straightforward. Decide for yourself, of course, but it looks safe to me - there’s only one buffer and fgets doesn’t let it overflow, there’s only one file opening, and while there is a potential race condition there, it’s with /dev/console. If someone can exploit this race by replacing /dev/console, you’ve got bigger problems. :)

So here is how you race this: beepbop

Which is bad, because Ubuntu and Debian both install beep SUID root, by default. You can check with “dpkg-reconfigure -plow beep”. 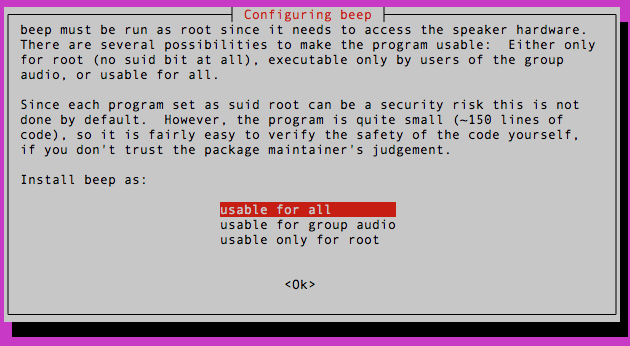 Somebody also created a fun website for the beep problem, complete with logo and name: Holey Beep . 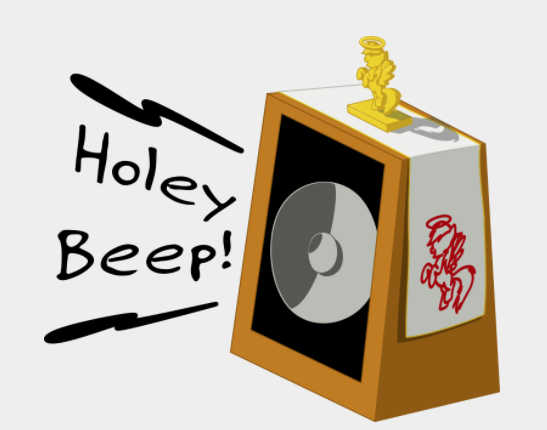 Holey Beep : The site, which is done very tongue in cheek, also contained a patch for the problem, advertising it like this:

So why would your computer beep when it applies a patch? That’s another fun thing. The patch contains this hunk:

and that looks very much like an ed-script. In fact, until recently that is exactly what patch did: popen a copy of ed and feed it. The line “id > ~/pwn.lol; beep” will hence be run, create a file pwn.lol in $HOME with the current user id, and then execute beep. That’s the promised beep you hear.

It’s fixed by writing the ed code to a tmp file while filtering the commands fed to ed, and then feeding the filtered input into ed.