With these things and general cryptography we can built three very versatile things that see many applications: Digital signatures, eternal logfiles (“blockchains”) and hash trees (“torrents”).

From asymmetric cryptography we know we can have two keys, P and Q, which actually work in symmetry: What has been encrypted with one key can be decrypted only with the other key.

The asymmetry is introduced by keeping Q secret and makig P as public as possible.

Unfortunately, in asymmetric public key cryptography, the keys are usually rather long, and hence the encrypt() and decrypt() functions are usually quite slow. It is useful to keep M reasonably small.

For digital signatures, the signer calculates a hash H of a message M and then encrypts the hash H using the private key Q, creating CH.

The message and the encrypted hash are sent together.

When receiving the message, the receiver can read the message and can calculate their own checksum, RH = hash(M).

Because the public key P of the sender is, well, public, we can also decrypt the encrypted checksum the sender calculated: H = decrypt(p, CH).

If that H is equal to RH, we can know that one of two things is true:

Assuming the latter is not the case, the former must be true and that means that the message we received is as it originated at the sender and we do know who the sender is.

When calculating hashes over a sequence of messages, it is possible to seed each message with the previous messages hash:

Each log entry consists of the actual message, the current timestamp and the hash of the previous entry. The current hash is a hash over all of these three things.

Each entry in the log consists of the actual log entry, the date the entry is being made and the hash of the previous log entry. The current hash is being calculated over all of these things:

Because each entry contains the previous entries hash value, it is becoming hard to change older entries in the log: A change to an old log entry will create a ripple effect that changes each subsequent newer hash value in the log.

Additional security can be produced by introducing media breaks and publishing the current hash value (with the date) in many places. The date added to each log entry is not supplied by the log source which sends the message: While the logged message can have a structure and may also contain a timestamp as seen by the message sender, the date fields shown as separate fields in the graphics above are the local time of the logger.

The interdependency of the log messages create a public order of events. Message 2 and Hash 2 could not have been produced before Message 1 and Hash 1, as the value of Hash 2 is dependent not only on the contents of Message 2, but also on the value of Hash 1.

A very simple implementation of this can be found in Lutz Donnerhacke’s Eternal Logfile (Site in German ). Interestingly, forward secure sealing as implemented in journald/systemd does not work like this, but uses another mechanism . It also does not seal each log entry as it is being generated, but creates 15 minute windows of log entries which are then protected.

The main reason for this are seekability and purgeability: It should be possible to validate the integrity of the journald log file without calculating the sequence of hashes from system installation.

Guarantees given in Eternal Logfiles

It is important to note that no assumptions whatsoever are being made of the structure of the messages being chained in this chain of hash values. It is also important to note that no mechanism to authenticate or validate the content of the messages being logged is available automatically - the only proofs such a chained eternal logfile provides is:

Limitations and Disadvantages of Eternal Logfiles

Without additional mechanisms, eternal logfiles cannot be purged nor seeked. That is, because each log entries hash is dependent not only on the logfiles content, but also on the hash of the previous log entry, it is not possible to ever delete log entries without losing the ability to check the chains integrity.

All logs have to be kept forever. Mechanisms to work around that could be constructed, but are usually not implemented, often on purpose.

Related to that is the ability to check the integrity of the hash chain: This is only possible from the anchor point, which by construction and on purpose is only at the start of the chain.

A validation of the chain therefore becomes increasingly costly as the length the chain increases and no purge mechanism exists. A full chain validation could create a local index, which notes the position of each log entry and also the expected checksum. This would allow quick seeks and quick local entry validations.

Building this index is still dependent on at least one big scan and validation of the entire chain.

It is also possible to structure hashes-of-hashes in a non-linear fashion, for example in a tree structure. The Merkle-Tree is named after the cryptographer Ralph Merkle , and is one specific implementation of a Hash Tree. 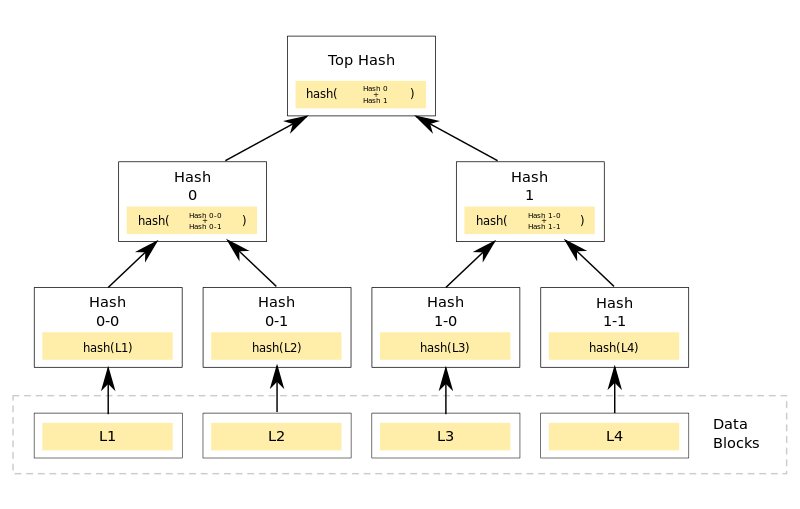 Data (the messages) are at the leaf nodes (L1 to L4) of the tree. Non-Leaf nodes contain hashes of the blocks beneath them.

Hash Trees can establish order of events the same way linearly hashed logfiles do. They allow better pinpointing of the position of an error, at least down to the position of a single block, while at the same time still assuring the intrity of other data past the modified block. They also allow partial file integrity checks for each subtree of the main hash tree.

Hash Trees, Merkle Trees or variants of the system , are being used in practically all P2P systems, where their properties are useful to determine which blocks of a file a client already has and which ones are still missing. At the same time, the top level hash can be used as a file name in a content addressing scheme .

Like with the Eternal Logfile, no assumptions are made about the content of the messages that make up the payload of a Merkle Tree. Additional agreements between multiple parties about the content of messages are necessary to give data in a Hash Tree meaning. Without pruning/seeking mechanisms, all sequentially ordered transactional systems are accumulating log data/tree size without bounds. Creation of the systems current state is getting progressively more expensive in memory and computation required.