A hash function is a function that maps a large number of arbitrary data types onto a smaller number of contiguous integers. 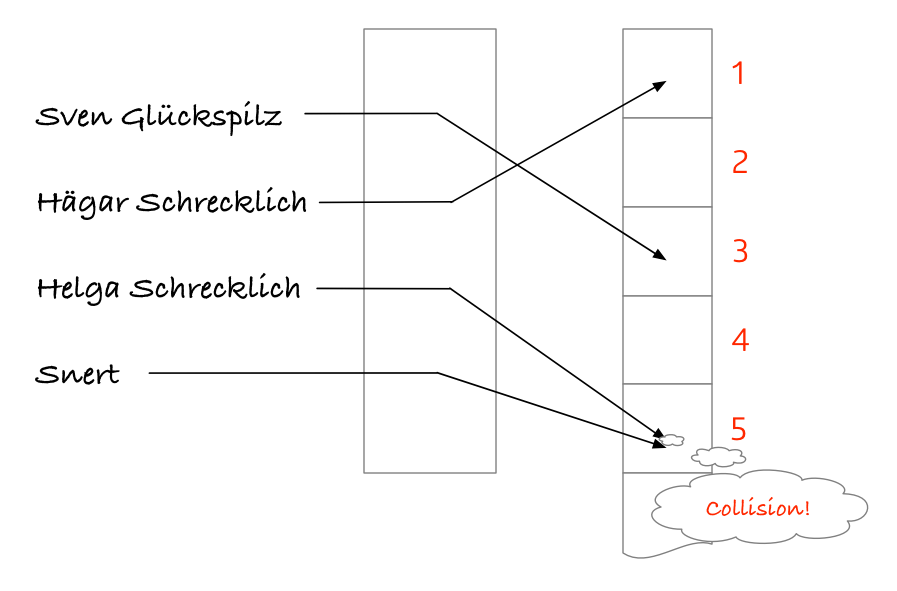 This simple hash function maps strings of arbitrary length to integers. Some strings are mapped to the same integer: a hash value collision.

The base set here is a number of strings of arbitrary length, which is a theoretically open ended set size. The target is a bounded number of integer values. It is thus inevitable that two strings exist which are mapped to the same target number, a hash value collision. Hash functions are useful in computer science, and you have been using them in everyday life, or at least seen them:

One of the most basic hash function is the digit sum :

Take the digits of a number and add them up. If the resulting total is larger than ten, take only the last (lowest value) digit. More generally, divide by a number (here: ten) and take the remainder - that’s called a modulo or mod division, here modulo ten.

For example, the digit sum of 357 is 3 + 5 + 7 = 15, so the result is 5. Digit sums are useful as very simple checksums. They are easy to calculate, but very weak. They can detect simple individual changes, but because of additive commutativity, they won’t detect swapped digits: The digit sum of 357 is identical to 537, because 3+5 = 5+3. 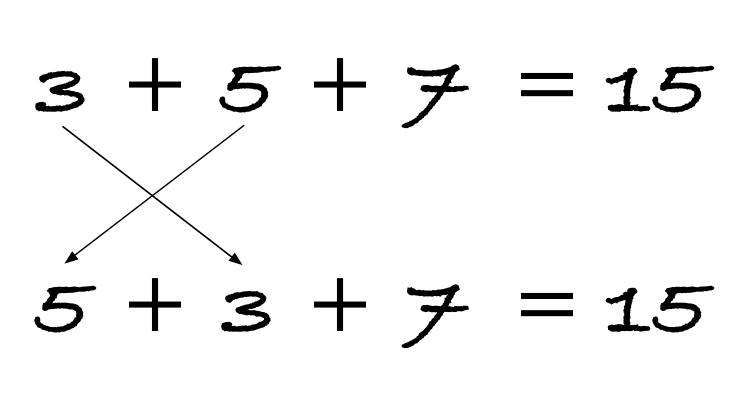 Additive commutativity makes it possible to swap digits in a number without changing the digit sum.

We find checksums like this also in the header of IP v4 packets on the Internet (with a bit of additional bit-flipping). Because headers of internet packets change on every hop, adjusting the checksums becomes a burden and IP v6 does away with header checksums.

Better checksums: ISBN-10 as an example

That commutativity weakness of digit sums can be fixed by assigning each numeric position a factor and then summing up the product of factor times position:

This is actually what the 10-digit ISBN uses:

A longer and much better writeup on how CRC checksums work can be found in Understanding and implementing CRC calculation .

CRC sums can be found almost everywhere in data protocols and data storage in computers - they allow to reliably detect many common errors patterns in data in transmission and storage, and allow for a correction of many errors, while at the same time not using a lot of storage space.

Another use of hashes is for storage and data access. Computers use array data types to store data values by index number: We can use variables such a[10] to create 10 storage spaces, all named “a”, but numbered 0 to 9, to keep 10 values. But what if we wanted to address the storage spaces not by number, but by name, that is use a["a text can be very long"] instead of a[3]? We call such data types dictionaries, and they are typically used by transforming a string (the index value "a text can be very long") into an integer (3) using a hash function, and then using the integer as an index into an array (yielding a[3] again). There are a few problems:

Two otherwise unrelated strings may have the same hash value.

A naive hash function for strings would for example sum up the byte values of the letters of a string, modulo the array size, to place an entry in an array.

There are many problems with this - it is pretty easy to come up with strings that collide. That is, to have strings that end up having the same hash value, even by accident. For example, if you use this hash algorithm and an array size of 10 to hash strings made up from digits, it’s easy to create strings that all hash to 0:

And that is because the ord(“2”), the number 50, is an even multiple of the array size, 10. So we probably want a prime array size to minimise aliasing: Our array size is 10, which is 2*5 as prime factors, so it aliases with any product of these factors: 2, 5 and 10. The way we built the hash function, the byte value of each digit shows up in the output of the hash function directly, so each string of letters that are spaced 0, 2, 5 or 10 positions apart or where the ord() values of the letters come out as 0, 2, 5 or 10, are going to create a larger than expected number of collisions. That is, we probably also want a more complicated hash function, which uses at least a counter or another variable value and the current byte value in some way as the input. There is more science to it, and tools exist to make this better.

The hash value can’t be the actual index for the value we store, because there will be collisions.

So we can’t put the bare value into the array: instead our array values need to be able to store original key with the value, which is the actual payload. Often that is implemented as a list of key/value pairs.

An alternative way of handling collisions is to demand that there are no collisions. If they happen anyway, we grow the array and rehash. That’s nice, but if an attacker can predict and provoke hash collisions from the outside, the attacker can force unbounded array growth and eventually will exhaust all available memory. Yves Orton explains how that is being prevented in Perl, and in many other languages that provide dictionary data types.

Hashes also can have uses in cryptography: Assuming we have a function that has the following properties:

With such a function we can do many things.

Continued in Hashes in Structures