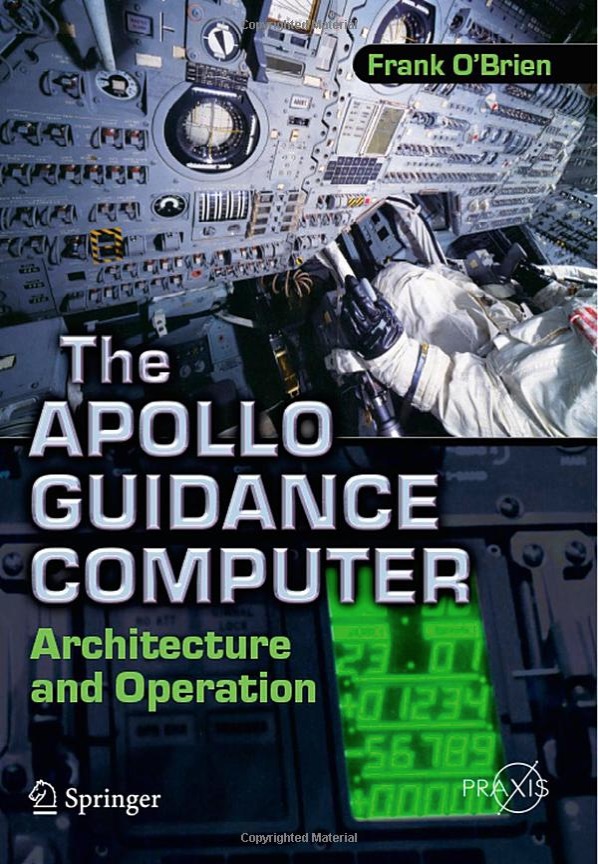 Frank O’Brien explains an outstanding piece of engineering: The Apollo Guidance Computer (AGC) was the computer that controlled the thrusters and navigation on the Apollo Command Module, and a second instance, on the Lunar Module. It’s a 32kg box with core memory and core rope ROM, a 16 bit discrete CPU (15 data bits and parity) running at 1 MHz effective, and some very special hardware behind its I/O ports.

Memory was 2k words of writeable core memory, and some 36k of ROM. The processor architecture is stackless, which complicates many things, and despite being designed in 1966, already has multiplication and division machine instructions. Addresses are effectively 12 bit, so sophisticated bank switching to extend the address space is needed, writeable and read-only memory are banked separately. Some interesting interaction with interrupt processing and bank switching exists.

There exists a very basic multitasking system, which at the same time is made simpler and more complicated by the stackless architecture. On top of the multitasking executive sits the interpreter, a virtual machine that was much more comfortable than the actual hardware and had a stack and index-registers, as well as trigonometric math functions. Navigational code ran on the interpreter, basic hardware control (thrusters, sextant, inertial control system and anything timer related) ran on the executive.

The book gives a guided tour into a hardware design over fifty years old, which itself was already foreshadowing and in some way surpassing the more modern integrated chip CPUs of seventies home computers. It also demonstrates a number of creative and interesting ideas of how to achieve remarkable things with very little hardware.