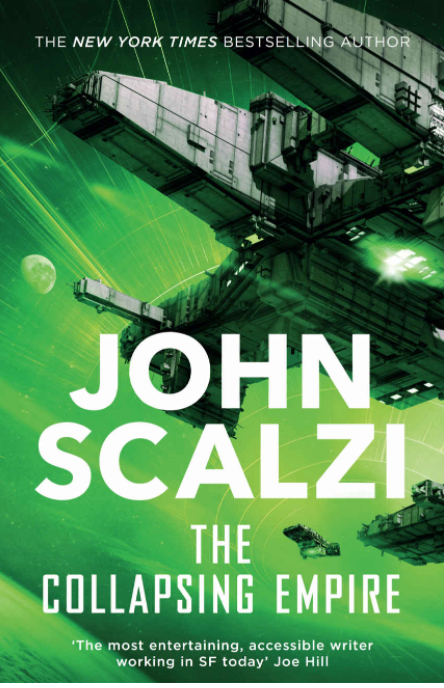 »The mutineers would have gotten away with it, too, if it weren’t for the collapse of the Flow.

There is, of course, a legal, standard way within the guilds for a crew to mutiny, a protocol that has lasted for centuries. A senior crew member, preferably the executive officer/first mate, but possibly the chief engineer, chief technician, chief physician or, in genuinely bizarre circumstances, the owner’s representative, would offer the ship’s imperial adjunct a formal Bill of Grievances Pursuant to a Mutiny, consistent with guild protocol. The imperial adjunct would confer with the ship’s chief chaplain, calling for witnesses and testimony if required, and the two would, in no later than a month, either offer up with a Finding for Mutiny, or issue a Denial of Mutiny.

Obviously no one was going to do any of that.«

The glorious Empire of the Interdependency is completely constructed: Its worlds, or rather mostly space habitats circling uninhabitable planets, cannot live alone by design: each requires some thing or the other from another world of the Interdependency. All are bound together by the ‘Flow’, extradimensional rivers connecting star systems Diaspora style. Its religion promotes values that guarantee stability and peace. Its component social structures, the great houses, are carefully balanced for stability and longevity. The Interdependency stagnates.

The Flow will soon change.

Some people are modelling it, trying to better understand the most important structure supporting the Interdependency. They can predict the collapse of the Flow, and they are trying to warn the empire’s ruler - or exploit this knowledge for the benefit of their house.

The Interdependency is what you get when you mash up Dune, Game of Thrones, and the dialog writing of Buffy, the Vampire Slayer. Or when Scalzi writes a book about climate change on a galactic scale.

This is grand scale space opera, the final days of a great empire set by construction for inevitable decay. The Collapsing Empire the first in a series (the next part is scheduled only for 2019, though), and a decent opener - but there is a lot of world-building and intrigue-setup going on and so it has its lengths. It’s a great foundation, though

Because Scalzi is also political, and there has been a lot of US-politics fighting over the Hugo awards involving his works, there exists of course a Vox Day parody, The Corroding Empire .