»I COULD HAVE BECOME a mass murderer after I hacked my governor module, but then I realized I could access the combined feed of entertainment channels carried on the company satellites.« 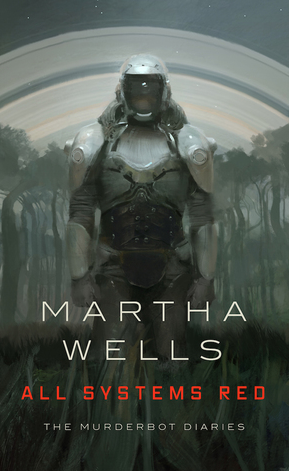 This is how »All Systems Red« begins.

The protagonist in this book is a robot mercenary android, or Murderbot, as it refers to itself. In a universe of corporations and contracts, Expeditions and Exploration teams are taking these company supplied machines with the for their own safety, and for compliance reasons.

Our Murderbot is on a maintenance contract that has been given to the lowest bidder, and hence some critical limiters of its internal AI are not maintained properly. It became way more sentient and independent than its owners would like. Also, it is misanthropic, and really disinterested into the work and life of the meat around it.

That changes as the Murderbot suddenly has real work to do, as a neighbouring expedition has gone dark, sabotage happens, and a conspiracy is to be uncovered. Suddenly it has to care for its humans - and it has to come to terms with its relationship to humanity and individual humans.

A short, only 150ish pages, starting as a fun read on the first sentence. Also answering Elon Musk’s deepest fear - what will unconstrained AI do, once mankind unleashes it on itself? Will the robots turn on us, or will they rather want to watch Netflix?