A cellphone or tablet is a fanless device. So is the 12" Macbook. That means you can do whatever is possible at any point in time within a TDP of approximately 5W.

Here is the power consumption of my cellphone over a 12h period. The scale on the left is mW, down is discharge, up is recharge (plugged in). It’s basically limited to 5W, and that only for short periods of time. 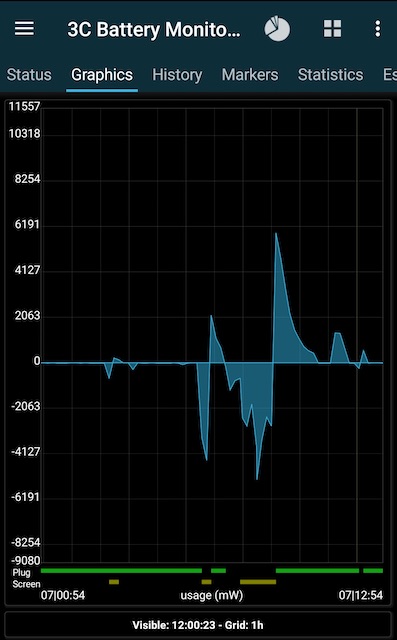 These devices also have batteries, and when they are running on batteries, they need to be sleeping most of the time and have their display off. Whenever they are not dark and/or sleeping, they drain the battery, fast.

These two facts are the reason why most people playing Ingress have done so in Fall and Winter, and why they all have cabled up enormous power banks to their equipment. That’s also why your cellphone used for navigation will reboot after an hour or two of driving, unless you remove the protective bumper and put the holder into the airflow of the dash vent. Also, white devices are better than dark devices on sunny days on the Autobahn.

Your laptop probably has a fan. Mine does. It is still mostly idle, but it is easily out of the TDP for fanless devices.

This machine is currently drawing 12.1W. The fans are hardly moving.

If I want to test what this machine could use, I could start a game. Most games are busy waiting event loops, that is, they keep the machine as busy as possible, and they are also exercising all the 3D circuitry in the box quite well. My laptop will never exceed 40W or so, doing this.

The gaming box underneath the desk is another matter. The graphics card is supposed to eat about 75W under load , the rest of the box probably as much. Thankfully, it has large 10cm fans that turn slowly, so it’s not as noisy.

Large servers in a data center usually have one or two Xeon type CPUs, and depending on the kind of servers, some also have a small two digit number of harddisks.

A rack full of Hadoop servers

These machines clock in at between 200-350W per server, and the power consumption is very much dependent on what the machine is doing . I can make these devices use up to 400W using mprime95 in torture test mode.

You can build mining rigs for Bitcoin, or rigs for machine learning. These things can become incredible hotspots, because each graphics card you add will contribute a three digit number of watts to your build. Interesting and extreme setups with up to 40.000 Watt per rack exist. They are very rare, and since you need to feed them a lot of power, also expensive to keep running.

A rack with more than some 12kW to 14kW active in it will need water cooling. That complicates things, because you probably want the lowest disk in that rack to be higher than the highest drop of water, so placement constraints complicate the design.

TL;DR: You process bytes. Things heat up. Depending on where you are, things will heat up so much that it is actually limiting what you can do. As technology improves, you can probably do more things with less heat, but it will still register.