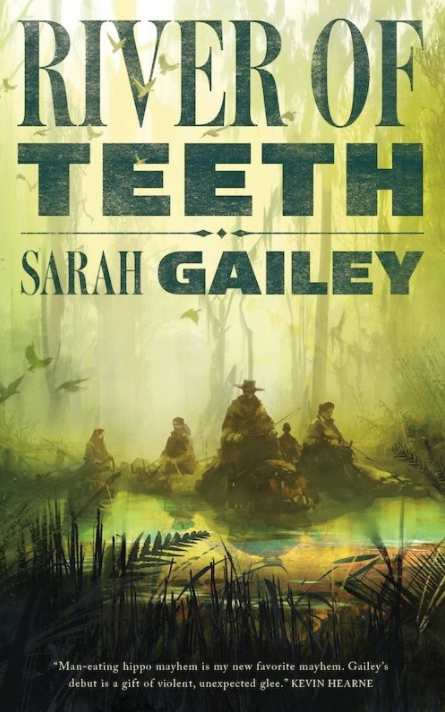 »In the early twentieth century, the Congress of our great nation debated a glorious plan to resolve the meat shortage in America. The idea was this: import hippos and raise them in Louisiana’s bayous. The hippos would eat the ruinously invasive water hyacinth; the American people would eat the hippos; everyone would go home happy. Well, except the hippo’s. They’d go home eaten.«

This plan, on which Congress did not follow through in our timeline, is the premise and the setting for Sarah Gailey’s alternate universe story “River of Teeth”.

So we get the sad story of Winslow Remington Houndstooth, a hippo farmer who lost everything in a fatal fire and now takes on shady jobs or government work, whatever pays the bills. Houndstooth is a Hopper, a hippo riding swamp cowboy, and he just took the job of cleaning a large body of water in the mouth of the Mississippi from feral, man eating hippos.

He assembles a gang of unlikely companions to help him with that, but he is up against a shady gangster running a gambling empire who is not amused of civilisation arriving at all. And of course there is a traitor in his team.

This is a short read of less than 200 paper-pages, but it’s also not expensive. The premise is completely insane, the characters are one-of-a-kind, refreshingly non-heroic, and have a lot of history together - which we discover as we go along.

Good for one evening, but it will be a fun evening.