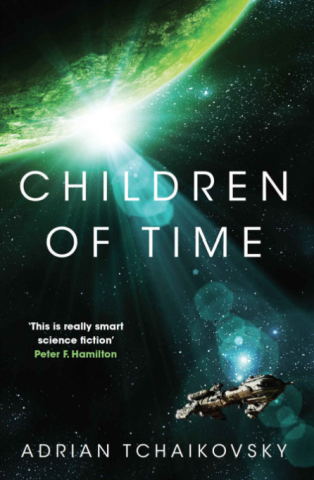 The people of Earth are on the verge of transcendence: They almost managed to create mind uploads, they are on the verge of creating true synthetic AI, they have been traveling to remote stars and are beginning to terraform worlds, on which they will seed Earth lifeforms and uplift them. All this progress, though, draws the ire of militant terrorists from the “Non Ultra Nature” radicals, which culminates into the sabotage of Brin 2 lab while seeding a terraformed world, and at the same time the complete destruction of humanity and its in-system colonies back home.

The Brin lab goes into stasis, trying to preserve the body and mind of its sole survivor, Dr. Avrana Kern, in the form of an experimental upload. Meanwhile, on the world below, the uplift nanovirus has made it down the terraformed world, but the payload - a barrel of monkeys - has not. So the nanovirus tries to find other lifeforms to uplift - and finds Portia labiata .

Thousands of years later the newly evolved intelligences of Kern’s world are being rediscovered by the survivors from the Terran system that made it into space again. But Earth has become uninhabitable, while Kern’s world is now home a the biotech civilisation of large, intelligent spiders.

Telling an epic, generation-spanning story of entire civilisations and still having relatable characters that tie everything together is not easy. If many of the characters are pumpkin-sized venomous jumping spiders it’s even harder.