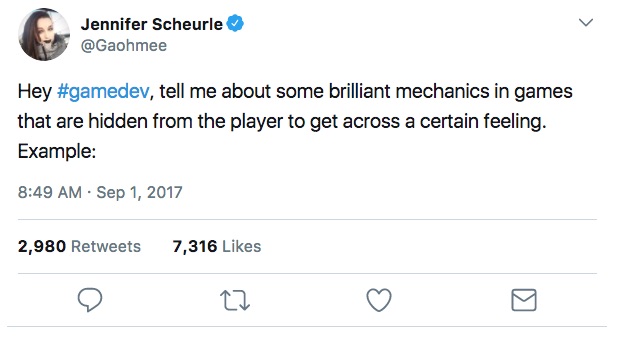 A lot of computer games are cheating, so that you can actually have fun with the game. Read the thread.

»Hey #gamedev, tell me about some brilliant mechanics in games that are hidden from the player to get across a certain feeling.«

»This is probably somewhere way down the list, but third person game thumbstick correction is a favourite. Pretty standard in AAA. (know you know but extrapolation for readers) game detects collision blocks and steers player around them, ignoring direction of input. Pioneered (I think) by insomniac but popularised by Ubi.. One of the things I’m proudest of in Volume’s controls.«

»Serious Sam, bullets are 1m thick when testing enemies, and 0m when testing world. So you can shoot near a corner, but hit enemy easily.«

»“Am I weird for disliking a lot of these ideas (especially ones like dumbing down offscreen threats)? I prefer solutions that let the player feel impressive, but aren’t exactly hidden. Like modern schmup hitbox sizes.”

“I’m getting tired of these things being described as “dumbing down”. The games that don’t do these things you’d not touch with a stick. Nothing is dumbed down, it’s simply a question of attention. Wanna fight large groups of enemies? We need to do this by necessity. The only thing that happens if we don’t is that you feel unfairly treated all the time because you had no chance to evade or react at all. And what’s the point of a mechanic if you don’t have a chance to learn and counter it? None. It’s just frustrating - you need a chance.”

“’m not trying to knock the entire concept. Letting the player cheat a little to create those tense victory moments is an idea I can support. But I think “dumbing down” is a fair term in the way I intended it. An example was removing senses from some AI. Which is OK! A reasonable design decision. You’re literally making enemies dumber to help the player, but that can be justifiable.”

“The term “cheating” does absolutely not sit right with me. It’s based on the assumption that without it it would just be harder. In reality however games would not be playable or utterly frustrating. So I don’t think dumbing down makes sense even if it seems like it."«

»“In Surgeon Simulator we hid many features to incite curiosity: for instance, if you dial your real phone number in the game, it calls you.” “Woah, is this real?” “True. And it plays a message integral to unlock a hidden level.” “Does it work across countries?” “If my memory serves me well, it does – just needs adding the country code. God, I hope the dial-out server still runs! :D”«

»“This is not helpful at all, but racing games used to have this rubber-banding thing going on to make sure races were “competitive.” “Totally is helpful but probably the most well-known. Mario Kart coined that one :)” “Oh right, and Civ: Beyond Earth supposedly rigged the enemy AI to have opposing ideologies to incite conflict. Peace was never an option."«

»“In Lone Echo Liv never ask you to do something, it’s always “we should” to prevent her from feeling bossy.” “Did you work on it? I could swear that’s not true, but would also find the choice … let’s call it odd.” “Somehow that doesn’t sit right with me… She was in charge. Do you feel like some of that feedback might’ve had sexist undertones?” “Potentially. But we also had the desire for them to feel more like friends or equals, despite her position of authority.” “That makes more sense to me :)"«

»“The Xenomorph in Alien: Isolation has two brains one that always knows where you are and gives hints to the second that controls the body :D Far Cry 4 deliberately turns down the accuracy and damage of NPCs the more there are near the player. Helping you feel like a badass. :) F.E.A.R’s AI dialogue is selected by the NPC doing an action, then it tells another NPC to say it. Making it look like they communicate. Oh and Left 4 Dead keeps you on edge by deliberately targeting the player either farthest from the group or who has received less aggro. (It also deliberately gives you time to heal, but the time is based on difficulty and whether you’re working together as a group). Sneaky. Um… Halo 2 helps players feel like they have influence over battle by forcing grunt NPCs to panic if elites are killed in proximity. Halo 3 embellishes this by having each fight act as a dance: first push forward, then fall-back and finally a last-stand against the player. The thugs in Arkham Asylum will avoid doing 180’ turns at all costs to allow you to feel stealthy and sneak up behind them. Oh wait, remembered some more. Elizabeth in BioShock Infinite throws ammo/health/weapons to the player based on their current state. Running outta ammo? She’ll throw you a fresh gun. Nearly dead? A health pack! These items are spawned in by her and not found on the map. It creates a sense of relief and excitement by getting that thing you need at just the right moment. :D Despite the AI in F.E.A.R. being aggressive and trying to kill you, they’re actually designed to minimise the perceived ’threat’ you create. (The only reason they’re attacking you is because it’s the only real way in which they can completely eliminate the threat you pose to them) BTW, (shameless plug)

I run a YouTube series on all of this game design/AI stuff .

All Far Cry games from 2 onwards dynamically add/remove NPCs to keep them within a short distance of the player.

Elizabeth in BioShock: Infinite tries to stand between you and your objective so you pay attention to her actions.

Zombies are spawned in inaccessible areas in Left 4 Dead (2) to give the illusion on how severe the infection is."«

»“Not sure if it was mentioned, but the tutorial in Halo 2 asked player to look up. Their input determined whether y-axis would be inverted."«

»“Is it ok to mention something we’re proud of in our own game? :P In Firewatch, a player not responding to dialogue prompt is a noted choice. The game reacts to non-response, and it helps create a feeling that ignoring someone has social consequence and the other person is “real”.

»“In Bioshock if you would have taken your last pt of dmg you instead were invuln for abt 1-2 sec so you get more “barely survived” moments."«

»“In Gears, found out 90% of first time players don’t play a second multiplayer match if they don’t get a kill. That first game’s important… So we started you off with some major advantages (like additional damage bonuses) that tapered off with your first few kills.” “seems unfair to other players.” “Only if you view multiplayer as everybody plotted against each other and not as a community where you need engaged players to begin with :)”

»“In Fable 2, if the dog gets stuck navigating and gets far enough from the player, it’ll respawn off camera running to you. Reviewers praised this as realistic dog behaviour! More of a bug workaround, than a design feature as such, though."«

»“Silent hill shattered memories did a lot of this sort of thing. Maybe @mrsambarlow would like to share some of his favorites…” “haha yes. Lots of stuff similar to other replies– we wanted runs of a nightmare chase to be terrifying, but not block overall progress. So every time you re-spawned we robbed AI of a sense (smell -> hearing -> sight) and then started to reduce numbers. If you looked over your shoulder we slowed them down so they were always ‘almost on you’. Only 2 AI were allowed to chase you directly, the rest had to flank (2x speed) or run to room exits so the action in yr periphery was scary. The problem with these mechanics is that for players it works, but for journalists who replay and replay to break down systems it. Sometimes appears that the AI is dumb – because the game thinks they’re struggling :)” “These are great, thanks for sharing! Should probably play it… :) A lot of these tricks don’t work when you do it over and over again yeah” “Also in the first area of Shattered Dimensions, the only noticeable sound is a car alarm, making the player natrually look for the car. The car itself has it’s front lights flashing, and they just happen to be directed at the door the player is suppoused to go through."«

»“Add HP +1 to a destroyed enemy Spacecraft until you’re sure its in camera view to show players more explosions and spectacle on screen."«

»“All our games, on gamepad, trying to level down fast after looking up, the view will snap to horizon making you feel like you are precise."«