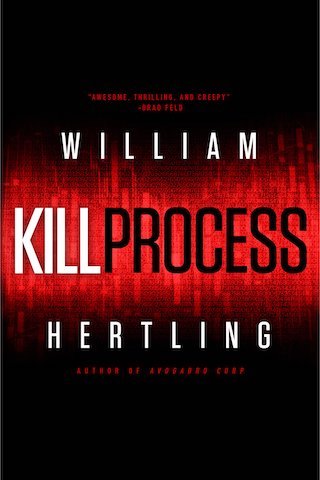 Kill Process is set in the same universe as “Avogadro Corp:, but is a freestanding story and not part of the Avogadro Series.

We meet Angelina Benenati. She’s a self taught hacker and database architect for Tomo, which is as much not Facebook as Avogadro Corporation is not Google and Braeburn is not Apple in Hertlings stories. She has a shady past, in which she hacked systems under the name of “Angel of Mercy”. She came out of an abusive relationship by the way of stealthily murdering her husband by the way of hacking the car’s computer, and she lost an arm in the resulting accident.

Angelina suffers from PTSD because of that, and she’s also on a crusade to use her unlimited database access at Tomo to identify women in abusive relationships and dextering their husbands through hacking to free them. Until she realizes that Tomo itself somehow has a quite abuse relationship with its users, and she sets out to change that.

She does this by inventing something that is completely not Octodon, and putting it into a startup. Which kind of forces her to stop her dextering, to confront her issues and start healing, and to actually create instead of destroying. Until somebody sets out to stalk her and tries to kill her.

Well written thriller with believable tech, solid Opsec advice, and generally a book so much better discussing “social networks” than “Eggers’ The Circle” that it’s off scale. Strongly recommended.