I have not been nice, because I have been abusing the box with mprime95 in Torture Test Mode, trying to make it consume as much power as possible.

Running this with variable values for TortureThreads allows me to learn the impact of CPU usage on power consumption. When Idle, the box consumes 170W, because we basically prevented it from sleeping. When busy, it’s some 406 to 420W. 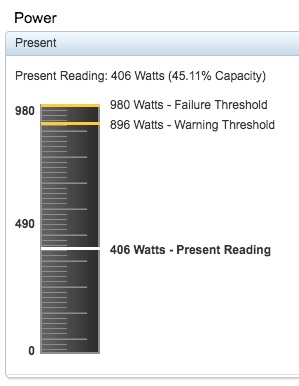 And the power consumption is not linear. Well, it is up to 28 Threads, and then more or less plateaus. 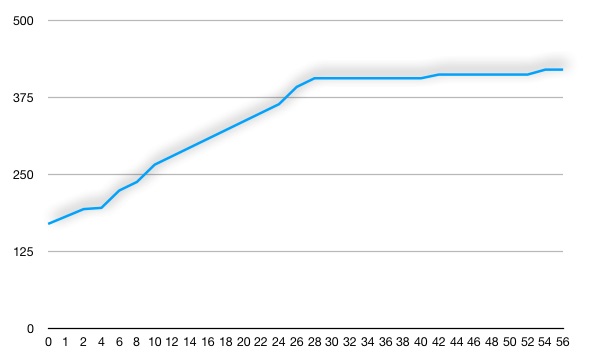 If you think about this, it makes a lot of sense. At 28 Threads busy, all the physical cores are being kept busy by mprime95, which is very much architecture and topology aware.

It analyzes which Threads are located on which Cores and Dies, and then sets itself up with CPU affinity for maximum utilization. So at 28 Threads busy (50% full capacity) we are already pretty much at full power consumption.

Unfortunately, conversely this looks not as nice:

If you define the full power usage at 420W and want to spend only half of that, 210W, you will reach that point at around 4-6 Threads busy - about 10% of the potential compute already consume 50% of the power.

Another way to think about it is Watt per Thread: 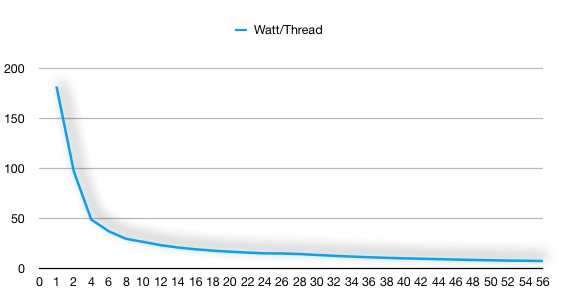 A nice hockey stick. Inflection point is around 6 cores. Things are becoming interesting, from a bang/buck perspective, if the box is at load 6 or higher at all times. From a data center planning perspective, it becomes clear that there is no way to make thermally oversubscribing racks financially attractive.

It is better to build for full thermal utilisation without oversubscription, and then make sure the boxes are always as busy as possible. Computation past a base load of 6 is basically available for free from a power/cooling point of view.