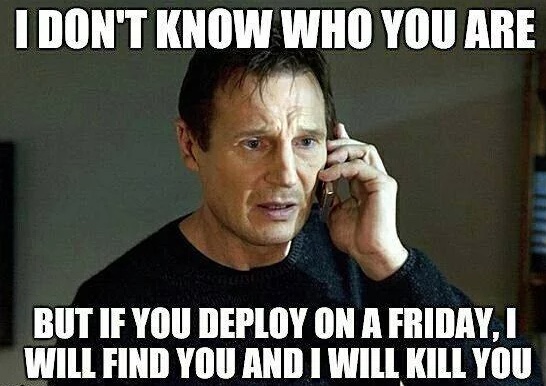 So somebody posted this on G+, and it’s a classic example for a thing that I classify as BOFH memes. That’s a group of memes and stories from operations people from a time past glorifying the toil and nastiness of operations.

This is going away now, for some time, and people identifying with BOFH thinking or finding it funny need to change, or go out of job. That’s also happening, rather quickly, and I have a talk about this (Slideshare , Youtube ).

The direct answer to the image above is

If you are having problems deploying on a Friday, you will have them at any time of the week. Your processes are broken.

People objected, confirming what I said.

An ex manager would deploy anything, often while drunk, at any time of the night and then bully me to fix it despite not being on call because probably he was of the opinion that bullying immigrants into working out of hours without compensation was fine. After the company got rid of him I’m definitely saner. At least I my chances of getting compensation when higher if he broke shit monday to thursday during the day.

There’s your broken process right there (and broken management, to boot).

That needs fixing, the Fridays are just a symptom. One other commenter:

sure but there is no such thing has a 100% process and so unless you have a 24/7 engineering team I would still avoid Friday deployments.

There you are. If it is of such importance that you need 24/7 operations, you better provide 24/7 ops. If it is not actually that important, who cares?

It is not that binary, but rather about risk management. That’s primarily about dealing with the problem, not pushing it away. So what could be done about it? The one thing that does not work is Heroism, but that’s one thing that the strain of BOFH thinking glorifies. Dev breaks things, Ops intervenes and fixes them, in heroic acts of emergency changes, during impossible times and adverse circumstances.

That’s of course destructive bullshit. Heroism, the solitary deeds of individuals saving the day, is a problem in operations, because it does not scale in space and time. If you create an organisation that rewards heroism, it will in time require heroism to run smoothly. That’s organisational abuse, grind and toil, and in the end, personnel churn.

You can’t build sustainable organisation on that, let alone growing organisations. The Heroism that is part of the BOFH meme and this culture is toxic to the people identifying with it, because it promotes Heroism, and hence self-abuse, toil and eventually burnout. Heroism needs urgent fixing. It is not the heroic act that improves the situation and helps the business grow. It’s the postmortem, and the changes that come out of it, which ideally should make the entire class of problems impossible in the future, without slowing down the ability to change and adjust.

That last half sentence is important, because the other thing that does not work dealing with risk is Obstruction and Ossification. An IT organisation exists, in part, to give management options. A part of their mission is to create mechanism on which management can then implement policy, use the mechanism to set a direction for the entire organisation to sail, smoothly. Being able to execute change safely and smoothly is therefore a fundamental, basic function of any IT organisation.

The obstruction that is part of the BOFH meme and culture is toxic to the organisation, because it idealises a way of thinking that is hostile to the other parts of the organisation (“us” vs “them”), vilifying other departments and looking down on their abilities. It also sees change as bad and dangerous when it is necessary to sustain the business. Together, these things and the ideology of Heroism encourage a way of thinking Operations as something separate, that exists outside and against the rest of the business. That’s an entirely destructive and non-constructive mindset, and that’s why you need to end it in you and in your organisation.

So how could you enable your organisation to sucessfully deploy new code at any day and time of the week?

You could introduce technology such as CI/CD pipelines. If you push something into a certain branch (“production” would be a good tag), it would run a build, synthetic tests where necessary and then roll it out.

You could introduce technology such as separation of rollout and activation. Code that is being rolled out as new is never actually executed. Only when you activate a feature flag, it is active for you, or for a small subset of users, which you can grow incrementally until is it full on. Then the old, dead code can be removed (or you keep it around intentionally).

You could improve monitoring technology, and put service level objectives (SLO) on it, such as requiring that the monitoring lag between an event happening and it showing up in monitoring is below some threshold ("< 15s" or similar). This SLO should be shown on the graphs as well, together with the actual metrics. This will give people making changes visibility on the impact of the change.

You could change the organisation and align incentives. Those who write code need to be made responsible for rolling out this code. This requires that they understand the relevant monitoring metrics, and care about them being complete and fast. It also requires that they understand the larger operational context of the subsystem they are working on, the “provides to” and “relies on” relationships and other contracts they have. It will also naturally put the pain where it can affect the required changes directly. Which is another reason why you should also alert product owners together with other people - it makes sure, the right alerts are being generated, actually service-relevant alerts, not too many, not too few.

You should change the organisation so that it favours many small changes over large and complicated ones. This is done with the suggestions above, taken together and implementing them. It is also done by doing away with formalized “Change Advisory Boards”, where people who know little about the actual changes and who are also not directly affected by performing them are put in control of deciding which changes are being made when and how.

Processes are about people talking to each other about who is going to do what and when and why, and how. The first thing that has to be done is getting the people who are actually going to do something at all to speak to each other, and the classic CAB is the antithesis of this.

And finally, you could install management controls that actually set realistic expectations and reward controlled risk taking. A “100% availability” objective is never realistic. Realistic expectations focus on realistic availability, things like “99.99%, because our production context, upstream and downstream dependencies, are actually even less reliable” or similar reasoning applied. They focus on recovery procedures and being able to execute them effortlessly. They focus on resiliency and exercising resiliency systems regularly in real production circumstances, so they promote testing in production and making it possible safely wherever and whenever possible. And finally, they work against the BOFH meme and mindset, because that place is precisely where you do not want your organisation want to be.

This whole set of stories needs to die in a fire.