In any discussion about cycling in Germany, sooner or later some geek who has been exposed to USENET shows up and then the ADFC #173 (http://bernd.sluka.de/Radfahren/fdf173.pdf ) is being quoted. That’s a thing from 1992.

The usual thing happened here on Facebook - a discussion about the SolaRoad Krommenie diverged into “Cycle Paths are stupid” and then linked over to the ADFC #173.

Here is a bunch of more recent material and links. 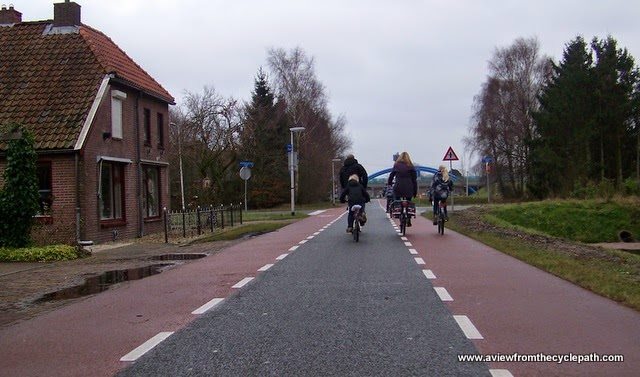 A View from the Cycle Path is generally a recommended blog. They have an article about On The Road Cycle Lanes , done properly and improperly. The What’s Better section at the end of the article discusses better solutions: Separate cycle paths with roundabouts , and unravelling (completely separate, intersection free infrastructures for different types of traffic). The Cycle Paths tag in the blog shows a lot of examples. An article on unravelling shows intersection free infrastructure. An example for unravelling can be seen on Google Maps close to Hoofddorp Station and in many other places. 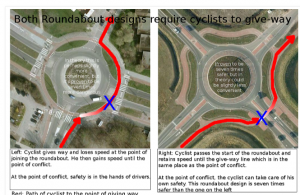 Another article explains safe roundabouts for bike lanes crossing road safely at intersections. The keys to the design are: The cycle path is led in a way that the cyclists are forced to slow down exactly at the dangerous point, and not before, accelerating into a danger zone, and the road is led in a way that motorists have to deal only with one danger at a time, and always into the same direction, right-ahead (two o’clock), and have adequate room to stop and wait.

And, separation of on-the-road cycle paths can be relatively simple and cheap, as shown by this Guerilla improvement action using toilet plungers . Social aspects of cycling are also being discussed in that blog. How did the Netherlands become such a good country for cycling? It started in the 70ies, here is an article . In fact, cycling creates traffic problems in the Netherlands that other countries wish to have, and which are being addressed .