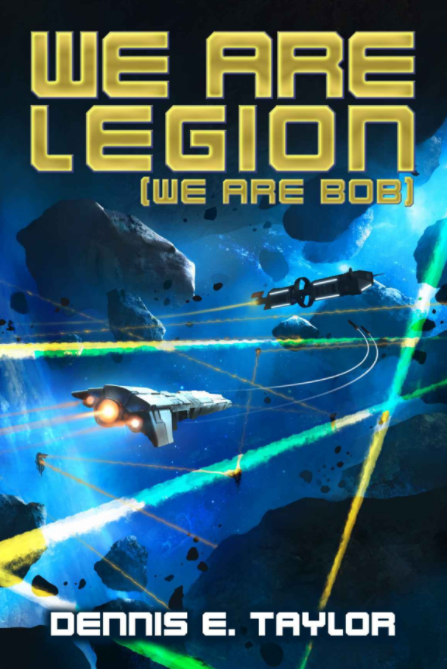 Somebody pointed me to We are Legion (We are Bob) , but somehow I can’t find that post any more. Anyway, following that hint, I picked up the book and read it. It’s awesome.

Bob Johannson made it big: Sold his software company to his greatest competitor, took the money, got a cryopreservation contract on his head and went to a SciFi convention, partying. Where he is run over crossing the street and dies.

114 years later his consciousness wakes up in uploaded form in a supercomputing cube in the theocratic dictatorship that has become the successor of the US of A, and is being trained to be the controlling intelligence in a Von Neumann probe with an experimental gravity drive, being sent to the stars. During his actual departure, war breaks out between the various remaining superpowers on earth, and earth ignites.

Bob flies between the stars, manages to find planets, to replicate and diversify himself and his various identities are slowly beginning to take over the universe. But he is neither alone, nor has he much time: Between saving the sad remainder of earths population, playing God to one Alien species, fighting other rogue earth-originating probes and detecting a strange Alien superpower that is stripping star systems of literally all resources he is hard pressed to find a few milliseconds of spare CPU cycles to relax.

This book is a wild ride, and a kind of escalating story: Not only is Bob snowballing his instances, his problems also kind of snowball. Good thing he’s not only a geek, but also a good project manager and thrives under pressure.