It is helpful to remember that containers are just normal Unix processes with two special tricks.

The child process still contains the same program as the parent process, so the parent processes program still has control over the child. It usually performs a number of operations within the context of the new child, preparing the environment for the new program, from within. 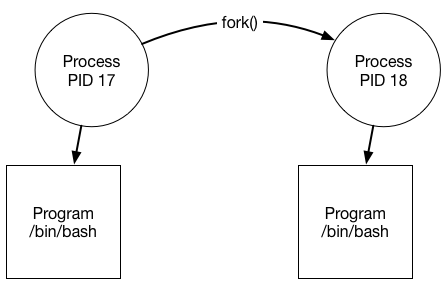 PID 17 forks, and creates a new process with PID 18. This process executes a copy of the original program.

Then, after the environment is complete, the parent program within the child processes context replaces itself by calling execve(). This system call unloads the current program in a process and reuses the process to load a new program into it. 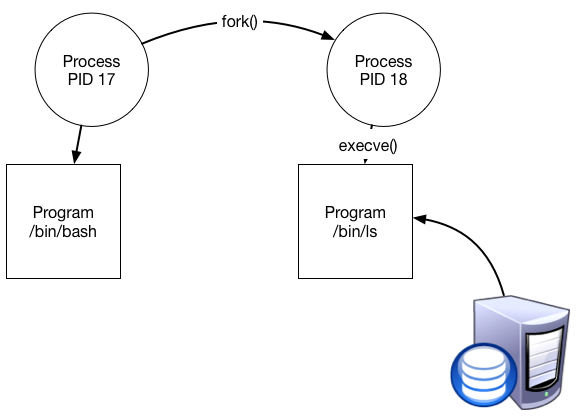 After bash in PID 18 has setup the environment correctly, it replaces itself with the actual command to run, /bin/ls. The code for that is being loaded from disk into memory.

When the program in a process has finished, it terminates itself with an exit() system call. The parameter to exit() is the status code.

The parent process waits for the end of the child program using a wait() system call. When the child exits, the parents wait() call returns, and delivers the status code of the child’s exit() invokation to the parent. 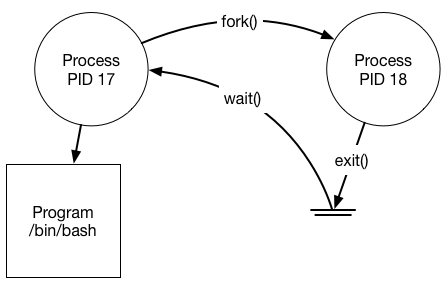 Child PID 18 terminates by calling exit() with a status code. Parent PID waits for the termination of the child, returning the status code of the child through the wait() system call.

Containers are Linux processes that are set up two special kinds of resource barriers:

Both resource barriers set up processes in a way that they cannot reach beyond the established borders:

The combination of Namespaces and Cgroups forming a resource barrier is called a Pod in Kubernetes.

For all practical purposes, the Pod has the same resource-isolation effect that a VM has, but unlike a VM it does consume practically no resources. Inside a Pod, zero or more processes may be running.

Processes running inside a Pod are still normal Linux processes executing normal system calls (within the limits that namespaces and cgroups impose on them), so they will be just as fast as regular processes.

Also, Processes sharing a Pod can see each other and touch each other, just like regular processes running on a physical or virtual machine. This allows co-scheduling of processes inside a Pod - Kubernetes calls containers doing this “Composite Containers” and there are a number of deployment patterns and use-cases for these .

Filesystem images are files that contain the block structure of a device inside a file. Using loop mounts, the file can be interpreted by the Operating System as a device, creating a file tree. With this concept, an entire environment can be copies into place using a single file, and then mounting that.

Building these files can be pretty complicated, though, and these files can also become quite large - and if you have multiple of these environments, they will also duplicate quite a bit of content: Each container will require a copy of the C standard library and many other system files that are simply shared between almost all containers.

Container systems often address this problem by defining the contents of an image as an assembly of Layers. A layer is simply a tar file that is being downloaded and unpacked on top of other, earlier downloads so that the total resulting image is the union of all layers stacked on top of each other.

Because it can become necessary for a higher layer to effectively delete files or directories contained in lower layers, there needs to be a mechanism that transports this information. Docker images use an awfully designed mechanism called “whiteout files” for that. Basically, if the tar contains a dotfile starting with the four letters “.wh.” (that’s for “whiteout”, Tippex), a file of the same name as the suffix of the whiteout file will be blocked out from a lower layer.

So if you unpack /etc/.wh.passwd, this will block out /etc/passwd from a lower layer.

Images can be written to. Writes will always go into the topmost layer.

Putting it all together: Kubernetes

Original Docker is a tool that has been created with developer concerns in mind and zero regard for operations. Docker can run containers on a single host, and has no idea about networking at all - it uses the single IP address a host has, and exposes ports of processes on the inside using iptables rules that merrily map ports between the physical host and the view of the world inside containers.

Docker builds images rather quickly by un-tar-ing layers on top of each other, and because writes are always going to the topmost layer and that layer can be discarded, it is also easily possible to undo all writes after a run and get back the pristine image for a new run.

This makes it ideal for running tests.

So production docker usually needs an IP address per pod, some kind of routing and networking isolation layer for all of that, and it needs a thing that takes requests to run images and assigns a physical host to each image.

Images are handy - they package a piece of software with all dependencies, and allow us to start processes on any host in a multihost cluster without installing additional software.

So the following can becomes possible: 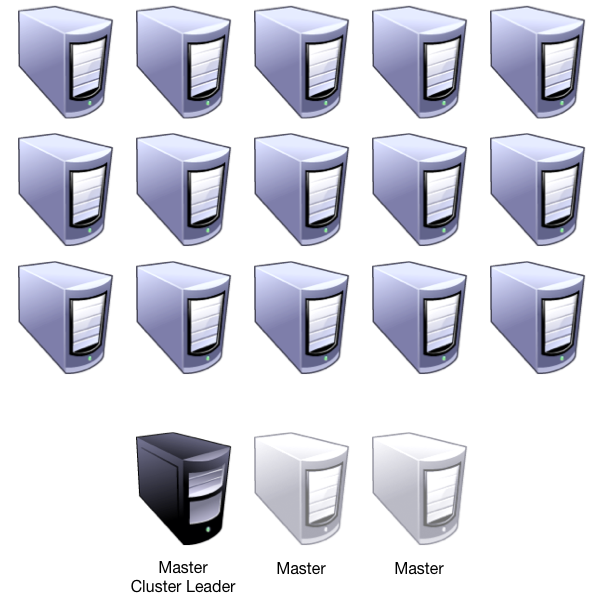 A cluster with a number of kubernetes nodes, and three kubernetes master instances. One has been elected leader.

We have a cluster with a number of physical hosts, all of which are capable of retrieving images and launching containers. Multiple cluster masters exist, one of which has been elected leader and executes the actual scheduling function. 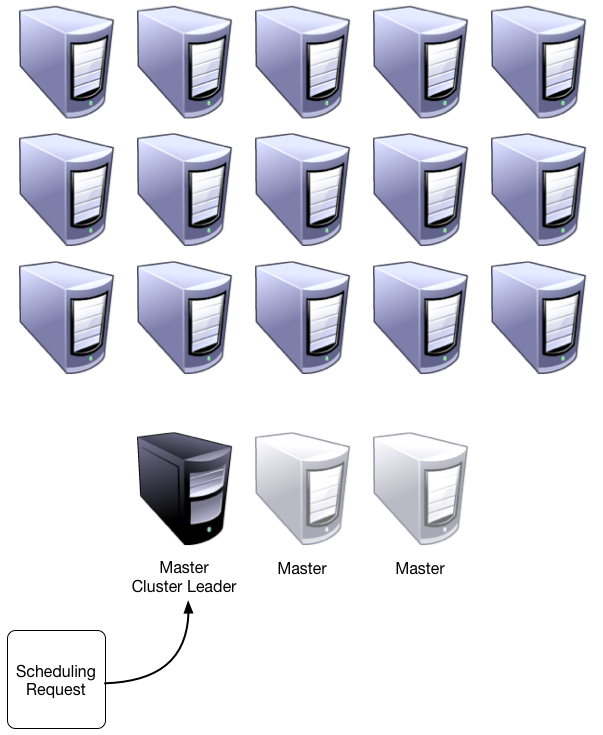 A scheduling request arrives, basically asking us to start this image on a host.

The cluster accepts scheduling requests, asking the cluster to pick up a certain image which has the following requirements on CPU, memory, disk and network I/O, and find a spot to run it. The scheduler surveys the cluster, finds such a spot and then asks the cluster node to do just that: Set up a pod, download and assemble the image and then launch the process with the image inside that Pod. 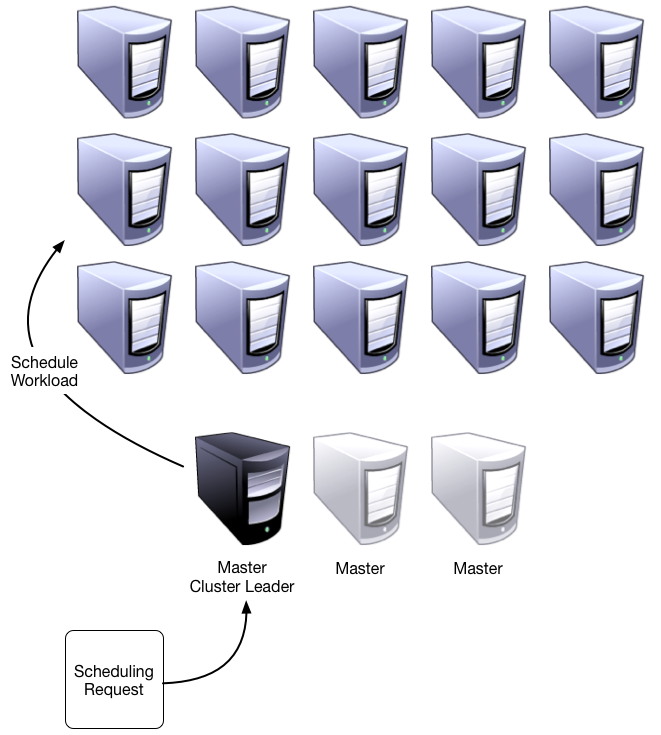 The worker will now download the image layers, assemble the final image, create a Pod and launch a process from that image inside that pod.

The end result is a process that sees one single, private network interface and runs inside a set of Resource Barriers that form the Pod. The program code for the process as well as all libraries or other data is container inside the image. 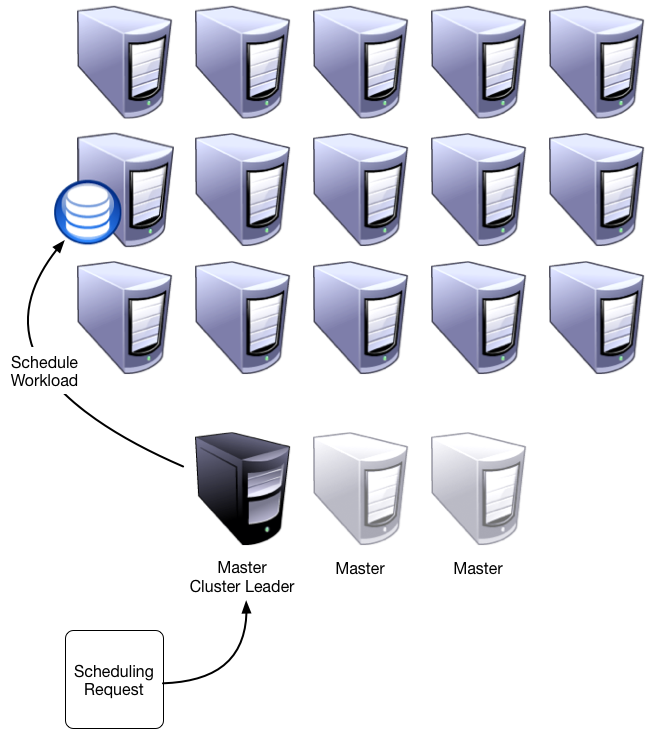 Code from the image is running inside the resource barriers create by the Pod.

By installing software including all dependencies inside the image we are not polluting our base operating system image. Once the execution of that workload finishes, we can “uninstall” everything simply by deleting the image (and its constituent layers).

We can create a cluster that represents a large amount of compute power in the form of CPU cores, memory, disk space and network I/O and have one single scheduler to run arbitrary applications that have been packaged in images on it. The cluster scheduler takes care of workload placement, and as long as we have sufficient capacity we can hand out compute power as needed without caring where exactly in our datacenter that capacity is available - if our datacenter is built in a way that can support this kind of use and if our application is built in a way that it can handle such an environment.