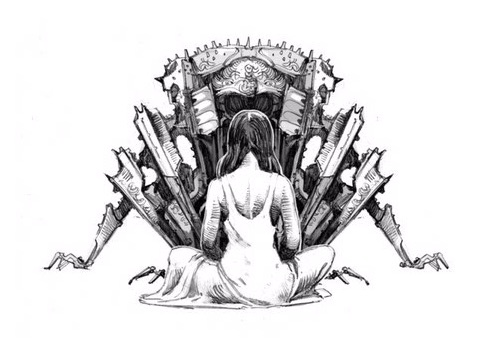 “Die Krone der Sterne” (The Crown of the Stars) is the first book in a series by Kai Meyer, establishing a setting, the players and the mood.

We are thrown into a decaying, galaxy spanning empire with a distinct Dune like flair. Tech is always huge, somewhat clunky and unreliable, covered in rust, dirt, runes and unnecessary decoaration, and it operates on principles that are never explained and also not really understood by it’s users - it has been inherited by previous, more advanced generations and today’s people can barely operate it.

The story follows Iniza, a young noble woman from a backwater planet, who has been selected as a bride to the god-empress on the empires homeworld Tiamande, but does not want to go. On her escape she assembles an unlikely group of rouges and outcasts, and is set on track of several mysteries from the empires history - which kind of resembles the Dune universe, if only losely: There has been something like the Butlerian Jihad , and a turn to mysticism and machine-hate in its aftermath, so it’s not just the aesthetics that resemble Dune.

All in all a good introductory story for a series - a lot of setup, but also actual characterisation and plot. I was not gripped, but also not bored.