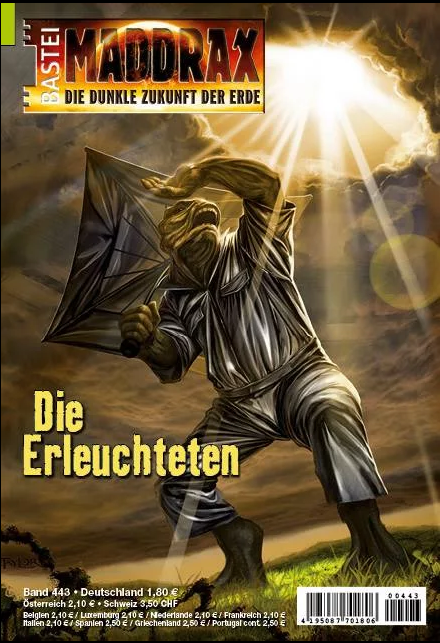 So Maddrax is one of those pulp series that are sold in booklet format in train stations, right next to romance novels. The setting echoes Planet of the Apes or other post-apocalyptic scenarios with Sci-Fantasy elements.

During a failed space mission involving firing nukes at an asteroid/alien terraformship on a collision course with earth, Matthew ‘Matt’ Drax is transported five centuries into the future, where he finds a barbarian wilderness sparsely populated by mutant survivors of the impact and barbarians.

As the story develops, Maddrax goes onto a journey of discovery through a Edgar Rice Burroughs-like system of worlds torn by conflict and interstellar war. It’s pulp.

I am not reading Maddrax, but got pointed at it by somebody resharing an article on G+.

Issue 443 “The enlighened” can be read standalone, as it is a crude satire that does not actually require much understanding of the larger universe or the factions in it. It deals with some lizard men living on a moon of darkness in one of the bright spots where the light can actually reach the surface.

Since the lizard people on the moon of darkness can’t actually survive that, they have to protect themselves from the harmful radiation of the daystar by wearing tinfoil hats. Still the brightness and radiation damages them, so they start believing all kinds of conspiracy theories or imagined dangers. Two of the lizard men, Drumb and Puudin, are becoming agressive and power hungry, starting to transform their society.

Can be read in a few hours. Hurts all the time. Which is kind of like expected for several reasons. Novelty item.