The door opened again, and Ship’s Surgeon Leonard McCoy came in. Without a word to anyone, he walked crookedly to the wall, leaned heavily against it, and said something that sounded like “Plergb hfarizz ungemby, and coffee.” Bones McCoy was not a morning person. 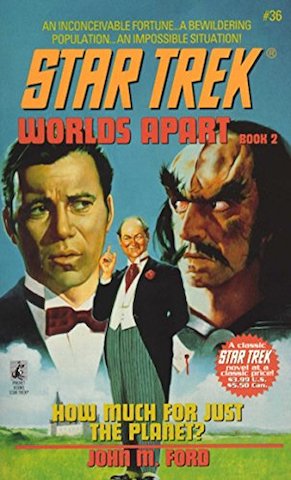 How much just for the planet?

Pleep, the wall replied, and then pling for the delivery of Scott’s breakfast, and pling again for Spock’s. They sat down at the table with Kirk.

The captain had broken the yolk on one of his eggs, buttered his toast, and had his glass two-thirds of the way to his mouth before noticing that the liquid in the tumbler was blue.

Not the deep indigo of grape juice, or the soothing azure of Romulan ale, but a luminous, electric blue, a color impossible in nature.

Kirk looked around the table. Scott and Spock were discussing some obscure engineering aspect of the bal—Deployable Practice Target. There didn’t seem to be anything wrong with their breakfasts; Scott’s black coffee was black, Spock’s juice was pale gold. Dr. McCoy was still waiting for his meal, watching the rest of them like a vulture with a hangover, but his stare had a distinctly unfocused quality. Maybe it was just the early hour, Kirk thought, a trick of the light or something. He looked at his juice again. Still blue.

The wall plinged, and McCoy brought his tray to the table. Kirk looked at the doctor’s meal: there was a huge mug of coffee, a slab of Virginia ham, and an enormous heap of something else. The something else was orange, in the same way Kirk’s juice had not been orange: it was signal-flare orange, bright as a Christmas necktie. Kirk noticed that Spock and Scotty had stopped talking, and eating, and were looking intently at the orange mound on the doctor’s plate.

Oblivious, McCoy buttered the orange heap, sliced the ham, and went at them like a starving man.

After a moment, Spock finished his crackers and cheese, stood up, and slipped his tray into the disposal slot. “Excuse me, Captain, Mr. Scott, Dr. McCoy. I have some preparations to make for the Target tests.”